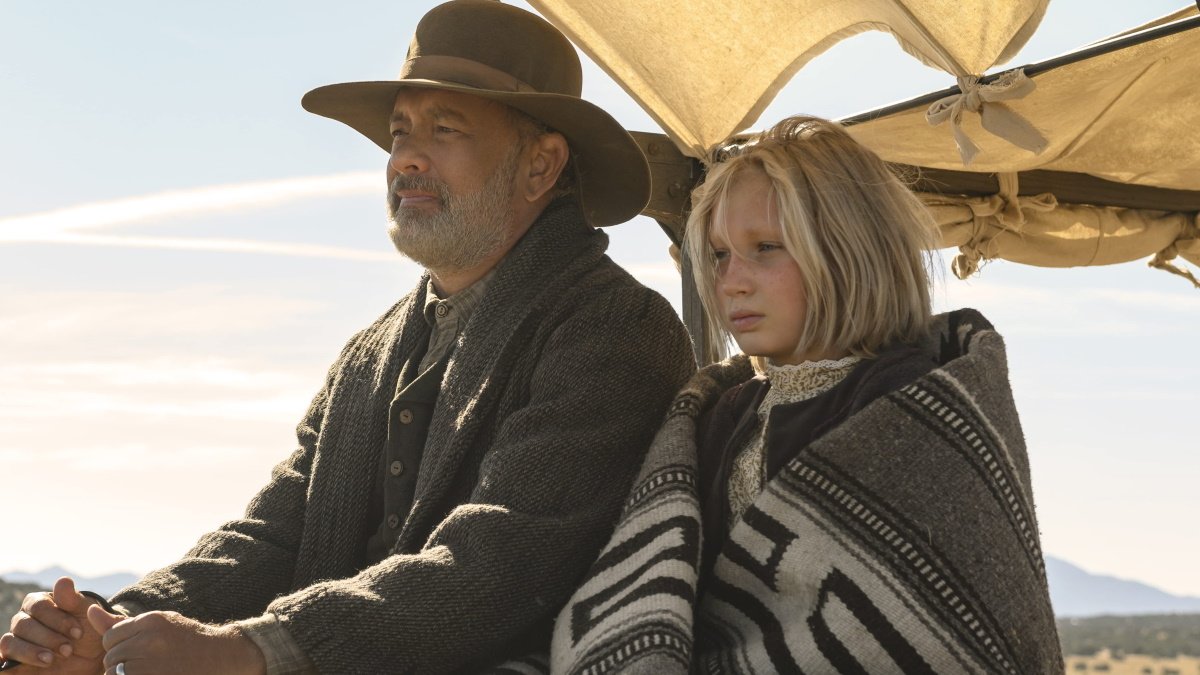 Tom Hanks stars in “News of the World“ (2020, PG-13) as a Civil War vet and widower who travels Northern Texas reading news stories to small town audiences. He volunteers to accompany a traumatized young orphan (Helena Zengel), a German immigrant raised by Kiowas and left alone after a massacre of her adoptive poeple, through hostile territory to bring her to her only living relatives. This western from director Paul Greengrass is a touching drama set against the violence and lawlessness of Texas after the Civil War. (HBO Max)

Action thriller “Kate“ (2021, R) delivers a modern twist on a classic premise. Mary Elizabeth Winstead as an American assassin in Tokyo who awakens from a botched job to discover she’s been poisoned. She spends her final day taking vengeance on her killers. The plot has been around since the classic 1949 film noir D.O.A. This film adds plenty of blood, carnage, and furious action in the John Wick mode. Miku Martineau, Tadanobu Asano, Michiel Huisman, and Woody Harrelson costar. (Netflix)

“Come From Away“ (2021, TV-MA), the filmed version of the hit Broadway musical about a small Newfoundland town that welcomes passengers stranded after flights were grounded in the wake of 9/11, features cast members of the original production. (Apple TV+)

A high school teacher embarks on a project to help autistic youth express themselves in “Language Arts“ (2021, not rated). Ashley Zukerman and Sarah Shahi star in the drama produced and filmed in Seattle. Available from iTunes.

The sixth and final season of “Lucifer“ (TV-14), a mix of crime procedural and supernatural fantasy, follows the fallen angel (Tom Ellis) as he steps in to (quite literally) play God.

International affairs: a group of hikers on the wilderness trip are hunted by an unseen shooter in “Prey“ (Germany, 2021, TV-MA, with subtitles). Also new:

International TV: the second season of “Into the Night“ (Belgium, TV-MA, with subtitles) continues the survival thriller set in a world where sunlight kills.

“LuLaRich“ (TV-14) dives into LuLaRoe, a women’s internet apparel company that is now under investigation as a viral pyramid scheme. The four-part documentary series is from Jenner Furst and Julia Willoughby Nason, directors of “Frye Fraud.”

“The Killing of Two Lovers“ (2020, TV-MA) stars Clayne Crawford stars as a husband and father trying to keep his family together during a separation from his wife.

Horror veteran James Wan (director of “Saw” and “Aquaman”) returns to the horror genre with “Malignant“ (2021, R), starring Annabelle Wallis as a woman whose waking nightmares of grisly murders are actually visions of real events. Streams same day it opens in theaters, available for 31 days from September 10. (HBO Max)

Charlie Cox and Aidan Gillen star in “Kin: Season 1“ (TV-MA), a drama about a power struggle in a Dublin crime family.

“Days of our Lives: Beyond Salem“ (TV-14) is a five-episode spin-off of the long-running soap opera.

“Kacey Musgraves’ star-crossed: the film“ (2021, not rated) is a 50-minute production showcasing the singer’s new album.

Also new are the documentaries “Bitchin’: The Sound and Fury of Rick James“ (2021, TV-MA), a portrait of the life and art of the funk artist, and “Detainee 001“ (2010, TV-14), about efforts to eliminate terrorist networks in Afghanistan.