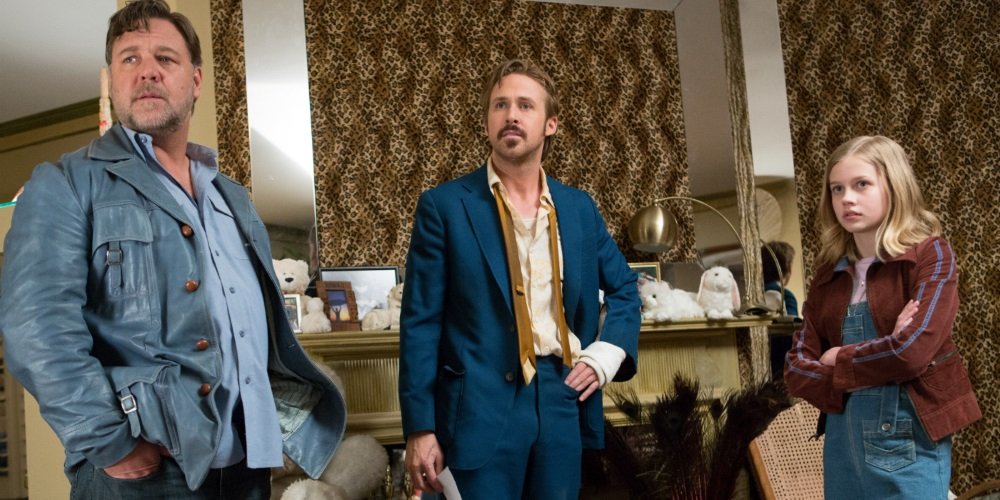 Shane Black helped remake the modern American action movie with his screenplays Lethal Weapon and The Last Boy Scout. For The Nice Guys (2016), he slips into flashback mode for a tribute to the old school action movies and private eye thrillers of the 1970s mixed with Black’s knowing sense of humor.

Ryan Gosling is Holland March, a screw-up of a private eye in a constant alcohol stupor, still reeling from the death of his wife and a lousy (if loving) father to his whipsmart-beyond-her-years adolescent daughter (Angourie Rice). Russell Crowe, who has gotten heavy in his middle years, is heavy-for-hire Jackson Healy, a man with a code even as he skirts the law with his own fistfuls of justice. So no, they’re not really nice guys but they are a match made in buddy movie heaven and they are on a longshot hunt for the missing daughter of the Los Angeles DA (Kim Basinger) that takes them to the mansion of a porn kingpin and land them in the crosshairs of a trio of hitmen.

It’s a bit sloppy as private eye movies go and Black is all over the place, with slapstick antics (including Gosling doing a wheezing Lou Costello in one bit that probably sounded better in the pitch meeting) mixed in with his smart-ass attitude, exaggerated seventies style crimes, splashy action scenes, and a tongue-in-cheek approach to tough guy tropes. But Black likes his characters and loves the genre and that’s enough to make the tribute / pastiche / affection parody work. Not as well as his superior Kiss Kiss Bang Bang, mind you, but better than you might expect.

It’s rated R for all the reasons you’d expect.

, iTunes, GooglePlay, and other services.
The Nice Guys [DVD]