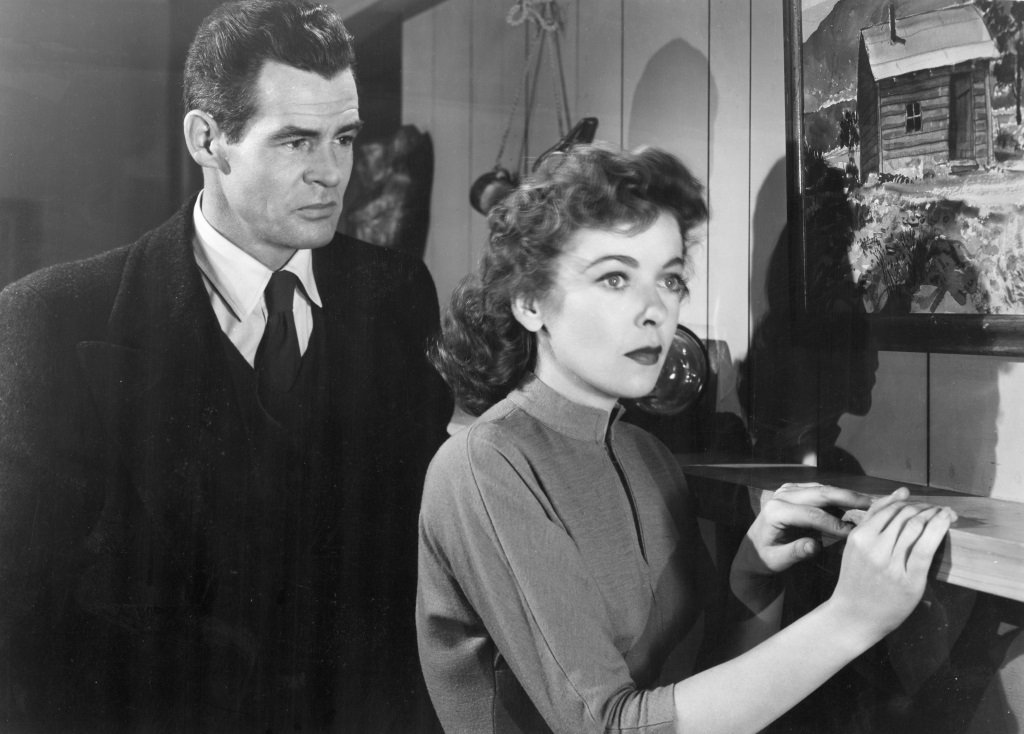 On Dangerous Ground (1952), directed by Nicholas Ray from a script he developed with A.I. Bezzerides and producer John Houseman, opens on the urgent yet fractured dramatic score by Bernard Herrmann. The music rushes forward anxiously, pauses with quieter instruments, then jumps again as we watch the nocturnal city streets in the rain through the windshield of a moving car.

This is the view of the city as seen by Jim Wilson (Robert Ryan), as an obsessive, tightly-wound police detective who works the night shift on the urban streets of an unnamed city filled with grifters, hookers, and petty crooks. He’s as dedicated as they come—he studies mug shots over his meal before the start of shift—but he has no family, no girl, no hobbies, as a quick survey of his Spartan apartment shows, and his single-minded focus on the job has twisted the compassion out of him. When his anger boils over into violence once too often, he’s sent out of town to help with a murder case in the rural countryside.

Ryan carries his contempt for the denizens of the mean streets of his beat on his sleeve. “Why do you make me do it?” he says to one small time hood who goads him into losing his temper and then shrinks in panic when Jim rises to the bait. It’s less a question than a justification for meting out his own righteous justice, but that malign neglect kicks him in the gut when promises one tawdry blonde (Cleo Moore) that she won’t get hurt for turning informant and then promptly forgets her, until he finds the underworld carrying out its own street justice on the very same girl. The entire episode simply bleeds hard-boiled attitude: a brassy good-time girl with a come-on pout and a masochistic streak to her flirtations, a cop who barely considers human, and an explosion of fury fueled in part by guilt. The handsome, controlled camerawork by George Diskant (a noir standout who also shot Ray’s debut They Live By Night and such low-budget noirs as The Narrow Margin and Kansas City Confidential) loses its composure momentarily in a turbulent handheld shot as Jim chases one of the thugs, just a few seconds long but so startling it’s like a glimpse through the eyes of an adrenaline-powered rage.

It’s what finally gets him sent out “to Siberia,” out of the way as the media firestorm when his victims lands in the hospital and call out the police brutality, and the beginning of the emotional journey of his country sojourn. Ida Lupino is Mary Malden, a single woman in a remote home and the older sister of the troubled young man hunted for the murder of a schoolgirl. She’s neither fragile nor bitter and all she asks of Jim is to bring in her brother without violence. Ward Bond is the father of the murdered girl, a man worked into a vicious fury that makes him leery of everyone else on the manhunt, and a dark mirror of Jim’s own contempt and anger reflected back at him. He’s so suspicious that he winds up to slap Mary just to prove she’s faking her blindness. For the first time in the film, Jim is protective rather than aggressive. Mary rekindles his compassion.

On Dangerous Ground is an unusual film noir in more than the simply the journey from the brutal city to snow-covered farm country. It opens as a police procedural but the rhythms are unexpected, the procedural elements simmer with the desperation and conniving of the underworld characters swept into the investigation or drifting in on their own, and the journey out of urban garbage heap into the peace of the country has both a contemplative and a pensive quality to it. Is there a film noir that spends so much time watching the landscape change from the driver’s seat of a moving car, and then find the same fury and intolerance is here in the heartland too?

, iTunes, GooglePlay and/or other services. Availability may vary by service.
On Dangerous Ground [Blu-ray]

This is a beautifully remastered and restored edition, clean and clear and shadowy. The Warner Archive Blu-ray don’t claim to be restored but they are consistently beautiful and this is no different. Carried over from the 2006 DVD release is a commentary track by film critic Glenn Erickson, which is informative and well organized, like a lecture and or a formal presentation. “This is a cop film where the hero never fires a gun.”