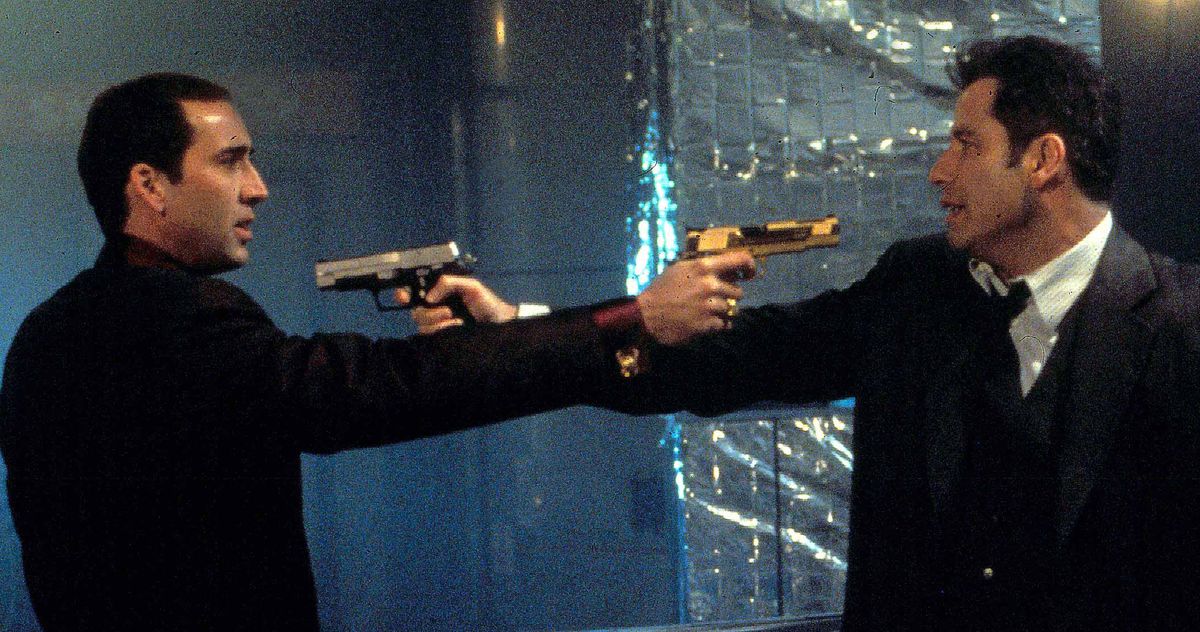 When John Woo, the action maestro of Hong Kong cinema, is working at the top of his game, he transforms violent action cinema into a ballet of blood and bullets that matches the emotional intensity of his character drama.

Face/Off (1997) is his second American film but the first to reach the pitched level of such Hong Kong films as The Killer and Hardboiled. He embraces a patently absurd premise – hero and villain exchange identities by literally swapping faces in science fiction plastic surgery – to drive a double-barreled revenge film driven by the split psyches of its newly redefined characters.

John Travolta is Sean Archer, the obsessive FBI agent who grafts the face of deadly enemy Castor Troy (Nicolas Cage) onto his own skull for a special mission, then ends up stuck in the identity when Troy escapes, swaggering out of prison under Archer’s face. Now Archer must play the villain to move through the underworld while psychotic terrorist Castor Troy becomes the perversely paternal family man while using every tool at his disposal to destroy his nemesis.

Watching the two actors swap exaggerated impersonations of one another’s acting styles and character tics is all part of the fun. John Travolta vamps Nicolas Cage’s quirky mannerisms and flamboyant excess with the grace of a dancer after the transformation from cop to master criminal, while Cage plays the sullen, bottled up agent excruciatingly trapped behind the face of the man who killed his son. His attempts to live up to the terrorist’s reputation become cathartic explosions of violence that both thrill and terrify him.

This is merely icing on the cake for action fans, the dramatic backbone for the some of the most visceral action movie thrills to ever hit the American screen. Woo fills the screen with one show-stopping set-piece after another, bringing a poetic grace to the action freakout with sweeping camerawork and sophisticate editing. This marriage of melodrama and mayhem ups the ante from cops-and-robber clichés to a conflict of near-mythic levels.

It earned an Oscar nomination for sound effects editing.

Also on Blu-ray and DVD and on SVOD through Amazon Video, iTunes, GooglePlay, Fandango, Vudu and/or other services. Availability may vary by service.
Face/Off [Blu-ray]
Face/Off [DVD]

On Blu-ray and DVD with commentary by John Woo and writers Mike Werb and Michael Colleary, two featurettes, and deleted scenes and an alternate ending (with optional commentary).