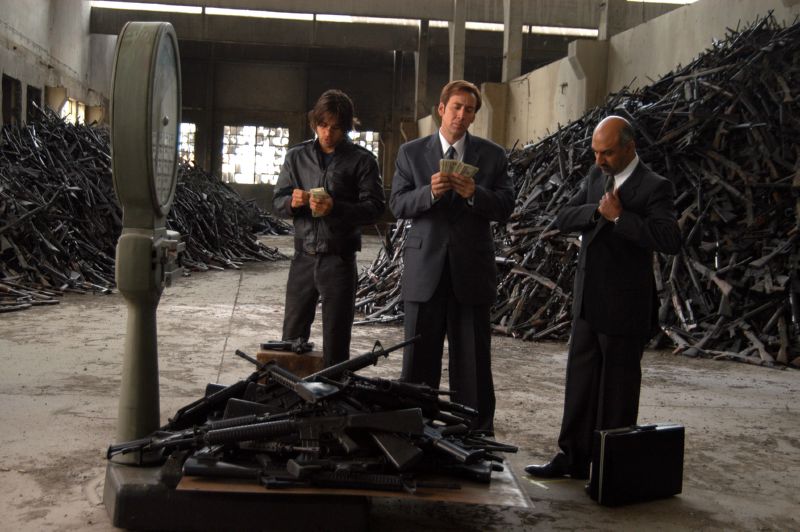 “There are over 550 million firearms in worldwide circulation. That’s one firearm for every twelve people on the planet. The only question is: How do we arm the other 11?” The opening line of Andrew Niccol’s Lord of War (2005) captures the film in a phrase: it’s serious, it’s sardonic, and it has both a sense of humor and a sense of outrage.

Niccol was at his best (usually) with “social science fiction” films, as he called them, set “five minutes into the future, as with his original screenplay to The Truman Show and Gattaca, which he wrote and directed, but there’s nothing science fiction about Lord of War (2005), an ambitious, often satirical portrait of the build-up of the modern international weapons trade.

Nicolas Cage stars as the Russian-American Yuri Orlov, who finds his path from the slums of New York’s Little Odessa to the American Dream through arms dealing. He’s a fictional character built out of elements of real-life figures on the international stage, with a dash of every gangster to anchor a “rise and fall” crime epic. This one just plays out on a much larger stage and Niccol uses his rise to illustrate the tentacles of the industry, the relationships with military leaders and government officials, the pay-offs, and most importantly the complicity of the American government.

Jared Leto is the morally-stricken brother who turns to drugs to dull his guilt, Bridget Moynahan the dream girl he woos with his fortune, Ian Holm an old-school arms rival, and Ethan Hawke the driven Interpol agent who makes catching Yuri his personal mission.

This isn’t a subtle film and Niccol isn’t trying to sneak a message by you—he’s right up front about everything and Cage delivers a flamboyant performance to match: the international dealer as showman—but it is awfully entertaining. You almost feel guilty for enjoying this hateful guy so much.

, iTunes, GooglePlay and/or other services. Availability may vary by service.
Lord of War [Blu-ray]

The Blu-ray and two-disc DVD releases from Lions Gate Home Video feature commentary by writer/director Andrew Niccol, the featurettes “Shooting Call: The Making of Lord of War,” “Making a Killing: Inside the International Arms Trade,” “Brothers in Arms,” and “Weapons of the Trade,” and deleted scenes.