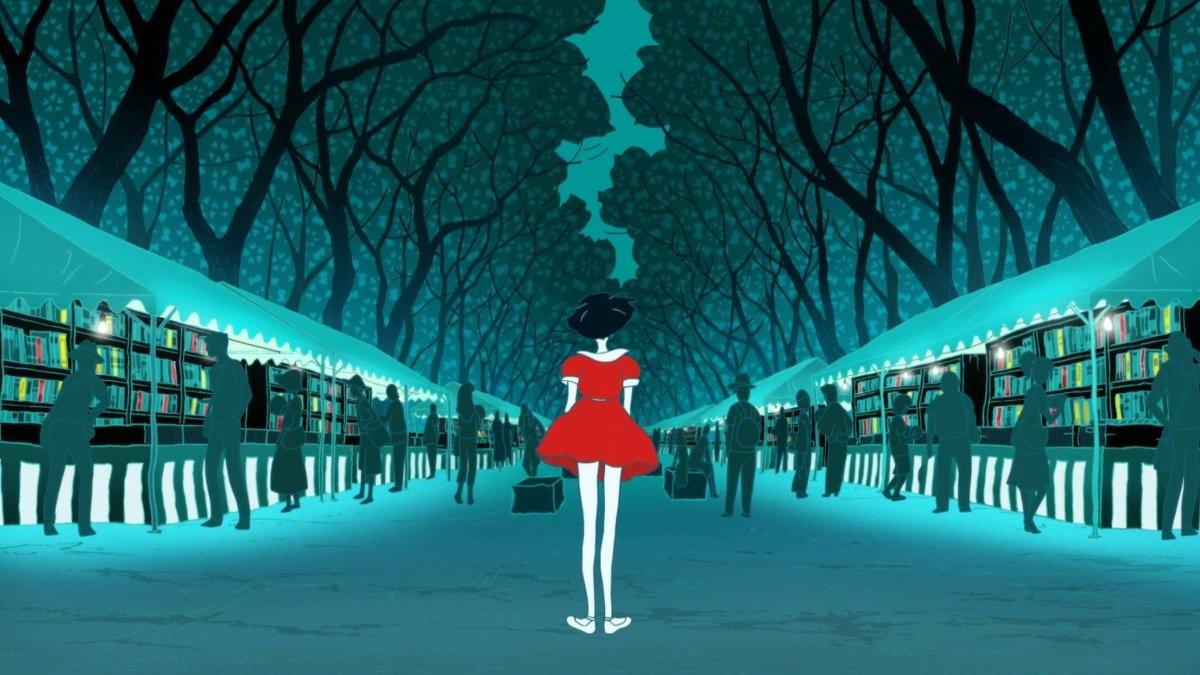 A teenage girl’s long, eventful night on the town becomes a fantastical adventure in Night is Short, Walk on Girl (Japan, 2017), an animated feature from Japanese filmmaker Masaaki Yuasa.

A high school sophomore, known only as “The Girl with Black Hair” (or Otome), joins a pair of harmless con artists for a night on the town to see what being an adult is like. In her case, it means drinking copious amounts of alcohol and meeting a bizarre collection of characters, including a dirty old man and a stinky fellow named Don Underwear, who refuses to change his briefs until he finds his lost girlfriend. Meanwhile Senpai, an upperclassman with an unrequited crush on her, vows to finally make his move on her by finding her favorite childhood book, which he’s told is on sale at a book fair.

Along the way to their inevitable meeting they cross paths with the library police, the young god of old books, a gang that steals the underwear of teenage boys, and a guerilla theater troupe who perform their operatic musical in short street performances.

Director Masaaki Yuasa, who has become a cult figure in Japan for his distinctive, unconventional approach to animated storytelling, brings wit, whimsy, and great creativity to his adaptation of Tomihiko Morimi’s novel. It’s like he’s channeling the experience and emotional journey through Otome’s own alcohol drenched imagination, elevating real life incidents to chapters of an epic fantasy, and the benevolence of the vision makes even the sketchiest characters harmless. She even gets through it all without a hangover, which may be the most fantastical twist of all in this delightful romantic fantasy.

, iTunes, GooglePlay, Fandango, Vudu and/or other services. Availability may vary by service.
The Night Is Short, Walk On Girl [Blu-ray+DVD]

Shout! Factory presents the film in a Blu-ray+DVD combo pack, with the original Japanese soundtrack and optional English and French subtitles. Features a short interview featurette with the director.