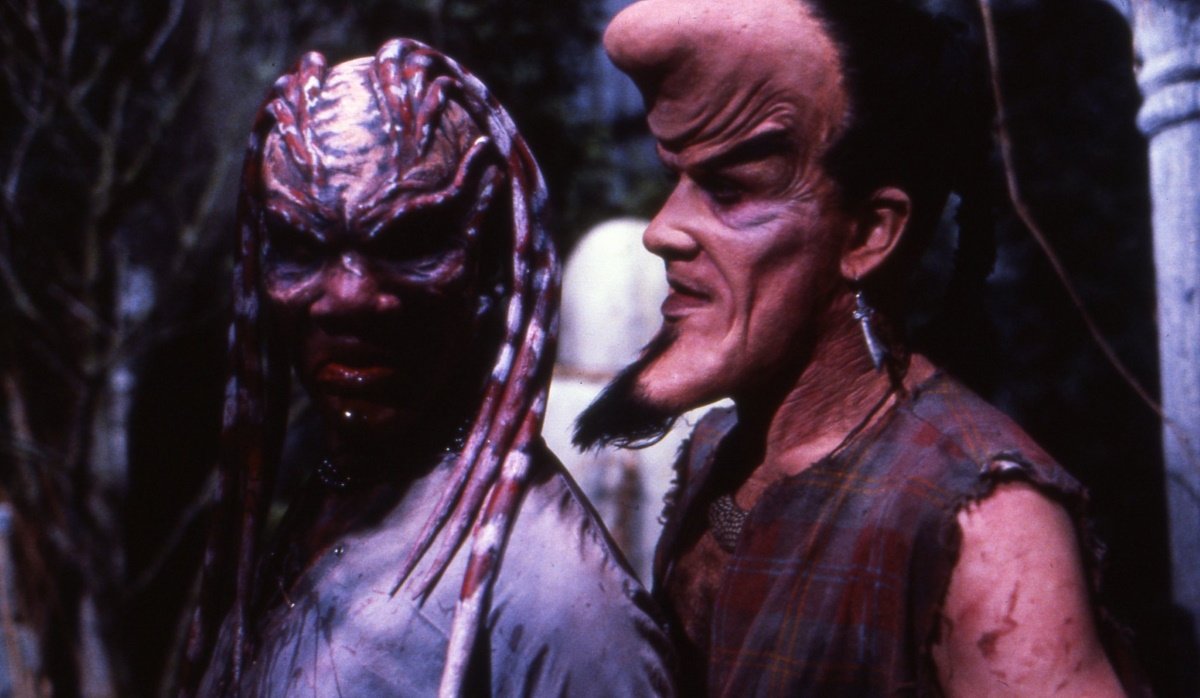 Clive Barker adapts his own work in Nightbreed (1990), a celebration of misfits and monsters in a weird story of fear and prejudice filled with Biblical references and mythic resonance.

The real monsters of Nightbreed are the humans, especially a psycho psychiatrist named Dr. Philip K. Decker played by filmmaker David Cronenberg with a flat delivery and deadened voice that makes him all the more unnerving. This doc is a real piece of work, drawing his kills from the nightmares of his patients and then framing them for the crimes, but Aaron Boone (Craig Sheffer) is not a normal patient and his visions of a place called Midian aren’t nightmares. They are anticipations of his legacy: he belongs to an ancient race of misfit outsiders considered monsters and banished to an underworld away from humanity.

Morgan Creek, the studio that produced the film, wanted something along the lines of his low-budget Hellraiser. Barker had something else in mind.

Nightbreed is neither the dark gorefest of Hellraiser nor a conventional monster movie. The nightbreed do have a taste for human flesh but they are not predators per se, while the final act offers the forces of human law and order as the modern version of an angry mob with torches and pitchforks wading into Midian to murder the misfits. Barker’s affection for Freaks and the Universal horror films of the thirties is apparent, though it’s all updated to a world of haunted souls, psychotic serial killers, rock and roll (there’s a rather silly but fun number in the first act), and mutant misfits who carve out an underground existence in a world that won’t have them. Barker doesn’t make his outcasts into saints or fallen angels, which is perhaps why he loves them so much, but they are devoted to looking after each other and determined to survive the hatred and hysteria of the human world.

Nightbreed is an odyssey of one man discovering his legacy and his potential: Aaron Boone is reborn as Cabal to lead his people out of Midian (which is where the Biblical Moses spent his 40-year exile) to their own promised land. And it’s a love story, a horror film, and a loving freakshow of marvelous, colorful monsters, who are presented with a more sympathetic perspective than in the theatrical release. Performances are variable and the narrative may still confound viewers expecting a more conventional horror film, but this is the film that Barker intended.

The film was taken from Barker’s hands, cut down drastically from his 142-minute rough cut and released in a form that Barker was never happy with. In 2014, Barker oversaw a restoration executed by Mark Allan Miller, who hunted down the original footage discarded from the rough cut. It is 20 minutes longer than the theatrical release but includes over 40 minutes of new and altered footage. This is the version that Barker claims as his director’s cut, as he was not given the opportunity for his own final cut before the studio stepped in.

This reconstructed Director’s Cut is the version currently available to stream.

Add to My List on Peacock or My List on Shudder or watch free on Hoopla, which is available through most public and college library systems.

Also on Blu-ray and DVD and on SVOD through Amazon Video, iTunes, GooglePlay, Vudu and/or other services. Availability may vary by service.
Nightbreed: The Director’s Cut [Blu-ray + DVD]

The Blu-ray+DVD Combo from Shout! Factory presents the reconstructed Director’s Cut of the film. Clive Barker and Mark Allan Miller outline the history of the editing and the restoration of the film in a new video introduction to Scream Factory’s release and it’s clear they are both proud of this release. Miller performed a superb job of restoring the elements—the entire film looks excellent and (apart from perhaps a couple of instances) you don’t see any difference between the quality of the original footage and the restored scenes.

The Limited Edition Box Set features two addition Blu-rays: a Bonus Disc with deleted scenes, bonus production featurettes, and other archival footage from the production, and a new edition of the theatrical cut.