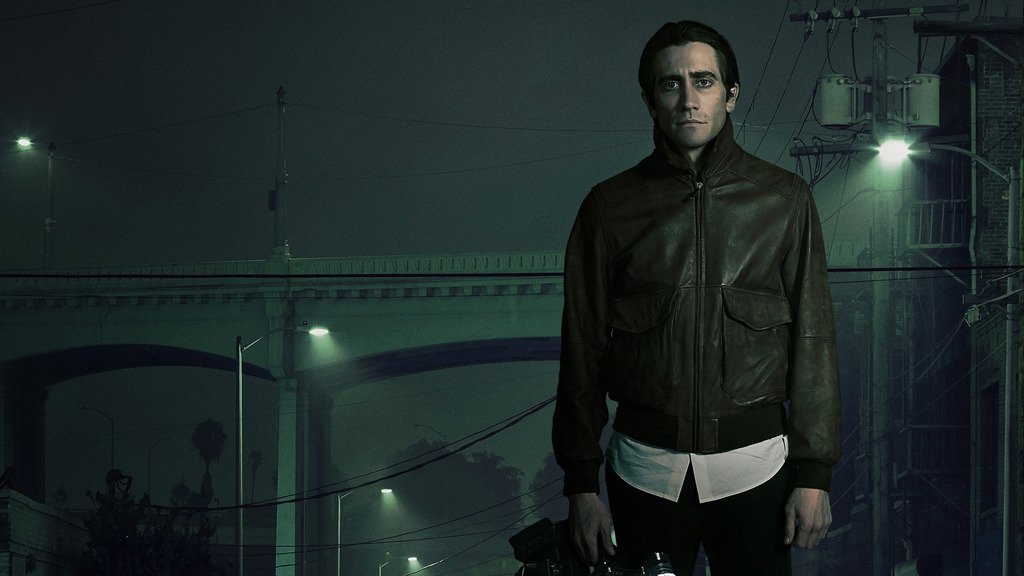 Nightcrawler (2014) earned an Oscar nomination for director Dan Gilroy’s screenplay, a wicked satire of the tabloid news television that chases sensationalistic stories for ratings (the cliché “if it bleeds, it leads” is the guiding philosophy). It should also have earned a nomination for Jake Gyllenhaal, whose Louis Bloom is a twisted Horatio Alger with the focus, drive, and heartless conniving of a sociopath.

Bloom is a petty thief and hustler who fancies himself a self-made entrepreneur in search of a break and he finds his niche in the world of freelance video journalists, the guys who rush to crime scenes and accidents to capture the freshest, goriest, most intimate footage and sell it to the highest bidder on the local TV stations. He’s Weegee with a video camera and he’s a quick study, a master of marketing and negotiations and a ruthless competitor who isn’t above eliminating competitors and obstacles.

It takes place almost entirely at night and director of photography Robert Elswit (an Oscar winner for There Will Be Blood) carves out a marvelous neo-noir atmosphere of Los Angeles at night with his razor-sharp photography of the streets after dark, lit by pools of street lamps, sweeps of headlights, and the cold, harsh glare of Louis’ portable spotlight. To Louis the streets are just conduits to the next hot spot and locations in which to stage his next scoop. Night may be a shroud but Louis doesn’t hide in the shadows. He’s brazen enough to do it the open and part of the crispness of Gilroy’s direction is the exacting detail of Louis’ methods.

Critics have complained that its portrait of the sensationalistic news philosophy lacks depth but that is really no more than the backdrop for the real story. Louis is a superbly written character and Gyllenhaal sells every dimension of him, from his unctuous surface manner to the dead eyes and cold calculation behind his blank smiles. It’s as precise as Louis’ dialogue, a practiced line of ingratiating small talk and self-help platitudes that apes the manner of the ambitious young man eager to show his potential. Underneath, he’s plotting how to get the next scoop and leverage it into a business opportunity. Crimes are merely opportunities and victims merely the raw material for his camera.

Dan Gilroy’s original screenplay was nominated for an Academy Award.

, iTunes, GooglePlay and/or other services. Availability may vary by service.
Nightcrawler [Blu-ray]

The Blu-ray and DVD from Universal Home Entertainment include commentary by director / writer Dan Gilroy with producer Tony Gilroy and editor John Gilroy (like the film, it’s a family affair) and the featurette “If It Bleeds, It Leads: Making Nightcrawler.” The Blu-ray also includes a bonus DVD and Ultraviolet Digital HD copy of the film.