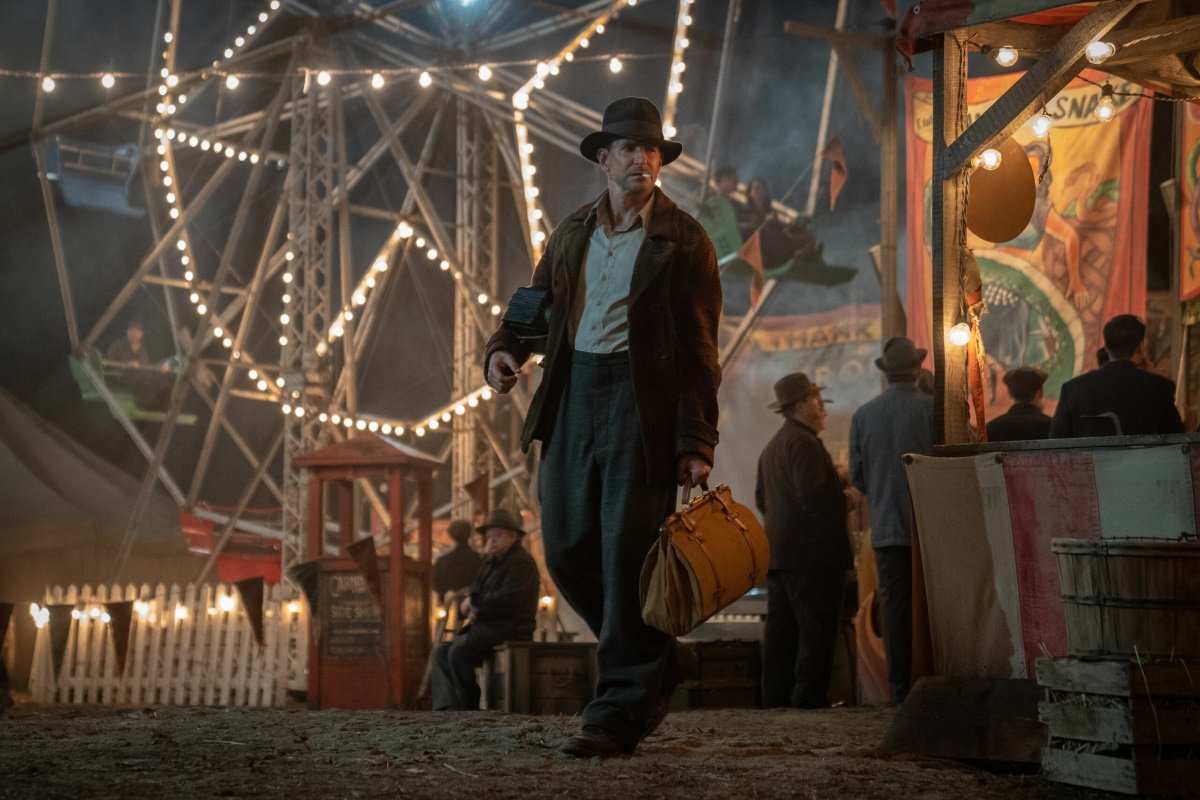 Bradley Cooper plays a charismatic carny in who takes a mind-reading act off the midway and into big city nightclubs in “Nightmare Alley“ (2021, R). Guillermo del Toro’s vivid crime drama straddles the dusty caravans and colorful carnival families working small towns in the depression and the art deco splendor of urban high life, where the mercenary Cooper uses his carny tricks to grift a the rich and powerful with the help of a cold-blooded psychiatrist (Cate Blanchett). It’s not a horror movie but del Toro brings that flair to this con artist thriller, and his period recreation is so rich you can feel the texture through the screen. Toni Collette, Willem Dafoe, Richard Jenkins, and Rooney Mara costar. It’s based on the depression-era novel by William Lindsay Gresham and the 1947 movie starring Tyrone Power. (Hulu and HBO Max)

Fans of Lee Child’s Jack Reacher novels were unimpressed by the Tom Cruise movies because he simply didn’t fit the author’s description. Alan Ritchson is a more faithful casting as the brawny military veteran in the new series “Reacher“ (2022, TV-14), which begins by adapting “The Killing Floor,” the first book in the series. Malcolm Goodwin, Willa Fitzgerald, and Bruce McGill costar in the first season of the action thriller. (Amazon Prime Video)

The limited series “Pam & Tommy“ (TV-MA), starring Lily James as Pamela Anderson and Sebastian Stan as Tommy Lee, takes on the true story of a sex tape that turned into the original viral video when it was stolen and uploaded to the internet in 1997. Seth Rogen costars as the thief who exposed their private life to the world in the early days of the web. Three episodes available, new episodes on Wednesdays. (Hulu)

Murder mystery meets improvisational comedy in “Murderville: Season 1“ (TV-MA). Will Arnett plays a police detective who solves a case every week with a celebrity guest partner who isn’t given the script and has to fake it and identify the killer. Annie Murphy, Conan O’Brien, Ken Jeong, Kumail Nanjiani, Marshawn Lynch, and Sharon Stone are this season’s guest stars. (Netflix)

Sports fans can stream “The Winter Olympics“ (not rated) events live and browse and view completed events by category through February 20. (Peacock)

Classic picks: Jack Nicholson and Faye Dunaway star in the “Chinatown“ (1974, R), the searing neo-noir of greed, power, water, and corruption in 1930s Los Angeles directed by Roman Polanski, and you can revisit the original “West Side Story“ (1961), which won 10 Academy Awards, with Natalie Wood, Richard Beymer, and Rita Moreno. (HBO Max)

The grandkids take up the family business in “Ghostbusters: Afterlife“ (2021, PG-13) with Carrie Coon, Paul Rudd, and special appearances by the original stars. Jason Reitman (son of “Ghostbusters” director Ivan Reitman) directs. Also on disc and at Redbox.

An awkward kid programs a giddily malfunctioning robot toy (voiced by Zach Galifianakis) to be his best friend in the animated comedy “Ron’s Gone Wrong“ (2021, PG).

An adorable puppy grows into “Clifford the Big Red Dog“ (2021, PG) in the live-action family comedy based on the beloved series of kids’ books.

Megan Hilty as Patsy Cline and Jessie Mueller as Loretta Lynn in the biopic “Patsy & Loretta“ (2019, TV-14), originally made for Lifetime by director Callie Khourie.

True crime: “The Tinder Swindler“ (2022, TV-MA) chronicles a con artist who woos women online and then turns investigative thriller as his victims try to turn the tables.

International passport: “My Best Friend Anne Frank“ (Netherlands, 2021, TV-14, with subtitles) dramatizes the real-life friendship between Anne Frank and Hannah Goslar, who met in kindergarten and reunited a concentration camp.

Michael Bay directs “Transformers: Revenge of the Fallen“ (2009, PG-13) and “Transformers: Dark of the Moon“ (2011, PG-13), the second and third films in the trilogy of action blockbusters about robots from outer space battling on Earth. Shia LaBeouf stars in both films.

An English author (Sam Claflin) and the Mexican translator (Verónica Echegui) whose spicy rewrite turned his failed novel into bestseller clash on a book tour in the romantic comedy “Book of Love“ (2022, TV-14).

The documentary series “Phat Tuesdays: Season 1“ (2022, TV-MA) explores the legacy of the all-Black comedy night at The Comedy Store created by Guy Torry.

Based on true events, “Beans“ (2021, not rated) dramatizes the 78-day standoff between two Mohawk communities and government forces in 1990 in Quebec from the perspective of an adolescent Mohawk girl (Kiawentiio).

“The Deep House“ (2021, TV-MA) is a haunted house horror with a twist: it is underwater in a remote lake in France where two divers become trapped. James Jagger and Camille Rowe star in the film directed by Alexandre Bustillo and Julien Maury.

Most streaming TV: the complete fourth and final season of the Canadian legal drama “Burden of Truth“ (TV-PG) with Kristen Kreuk;

The second season of the high concept science fiction drama “Raised By Wolves“ (TV-MA) arrives with new episodes on Thursdays.

A little closer to home is the comedy “Tacoma FD: Season 3“ (TV-MA).

Chiwetel Ejiofor stars in the Oscar-winning “12 Years A Slave“ (2013, R), based on the true story of Solomon Northup, a free Black man kidnapped and sold into slavery in the antebellum South.

Emmy-winner W. Kamau Bell directs the four-part docuseries “We Need to Talk About Cosby“ (TV-MA), which debuted at the Sundance Film Festival.

Jodie Comer stars as a young care worker who bonds with nursing home resident (Stephen Graham) living with young onset dementia in “Help” (2021), a feature film set in the age of Covid.

“Hope Street: Season 1“ (not rated) is a mix of soap opera and crime drama set on the coast of Northern Ireland as the town’s first Muslim police officer joins the force. New episodes each day through February 8.

Comer made her name as the brilliant yet flamboyant assassin in the addictive thriller “Killing Eve“ (TV-MA) with Sandra Oh. The third season is now streaming, the fourth and final arrives at the end of the month.

The limited series documentary “Mysterious Death of Eazy-E” (not rated) explores the life and the mysteries surrounding the death of the rap legend. (AMC+ and ALLBLK)

“Swallow” (2020, R) a psychological thriller starring Haley Bennett, and the horror thriller “What Keeps You Alive” (2018, R) both debut on AMC+ and IFC Films Unlimited.

“Roots & Revolution: Reggae on Film” presents 11 features and documentaries, from the outlaw classic “The Harder They Come“ (Jamaica, 1972) with Jimmy Cliff and British drama “Babylon“ (1980), set in Jamaican subculture of South London, to the documentaries “The Upsetter: The Life and Music of Lee Scratch Perry“ (2008, not rated) and “The Story of Lovers Rock“ (2011, not rated).

“The Discreet Charm of the Bourgeoisie“ (France, 1972, with subtitles), Luis Buñuel’s Oscar-winning satire of the ruling class, is presented with bonus documentaries. Also new:

A group of problem teens get superpowers after being struck by lightning the British young adult show “Misfits: Complete Series“ (2009-2013, TV-MA). Free with ads.