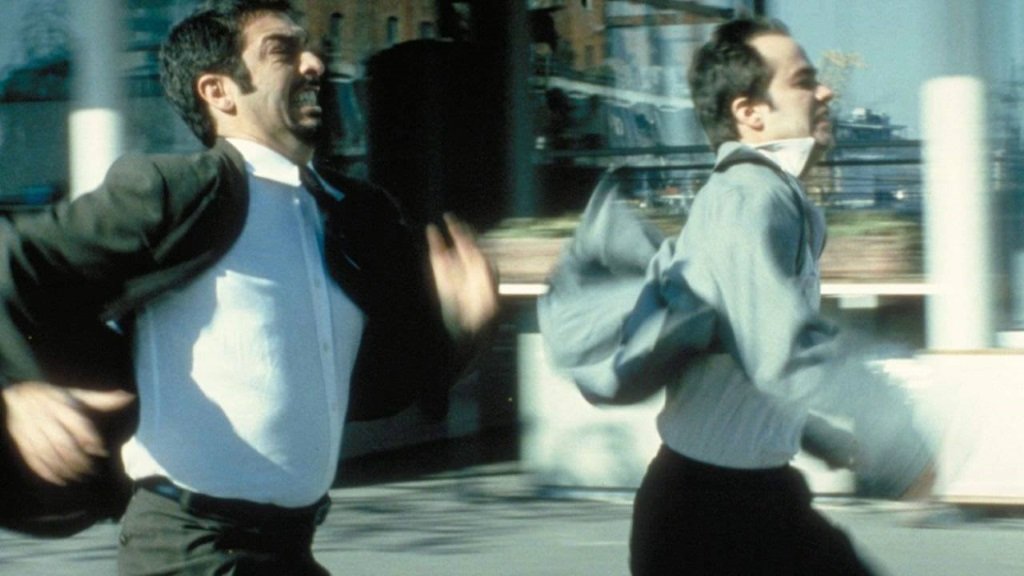 There is no honor among thieves in Fabian Bielinsky’s Nine Queens (Argentina, 2000), at least not in the code of Marcos (Ricardo Darin). The world is a mercenary place, he instructs his new acolyte Juan (Gaston Pauls). To illustrate the camera turns to the Argentine urban jungle around them and reveals the feeding frenzy of thievery played out by the human vultures and hyenas preying on the weaker members of the pack. Whether it’s justification or explanation, we don’t know, but Marcos, a con man with a history of turning on his partners, is out for every penny he can bilk out of the world.

Fastidiously groomed and too well dressed, Marcos is as much peacock as shyster. Played by Darin with a fascinating mixture of mercenary detachment and self-righteous justification, he’s the proverbial pro who would sell out his mother for the right price; he’s currently cheating his sister Valeria (Leticia Bredice) out of her inheritance and doesn’t bat an eye when she calls him on it.

Easy-going Juan is a small time hustler with an honest face and a quick-thinking ability to improvise but a tendency to feel guilty over his victims. That’s a weakness Marcos hopes to drill out of him as he runs him through his playbook of penny ante cons, hustling guileless old ladies and overworked waiters.

Then the nine queens, neither playing cards nor divas but a block of rare stamps at the center of a scam, fall into their lap. “This is the kind of chance you wait for all your life,” Marcos gushes, dollar signs flashing in his eyes, and becomes more obsessed with each obstacle they hit on the way to the score of a lifetime. You wonder who is playing whom as the scheme spirals wildly out of their control.

The cinema of scam is one of the hardest of genres to pull off and one of the most satisfying to watch when it works. This one does. While Bielinsky doesn’t bring anything new to the table, he a smartly engineered scheme and a good poker face, and he’s mastered the essential art of misdirection. It may not keep you guessing to the end, but there are enough surprises and wry revelations, right down to the last play, to make this a most satisfying cinematic confidence game.

In Spanish with English subtitles. Rated R for language.

On DVD and on SVOD through Amazon Video, iTunes, GooglePlay and/or other services. Availability may vary by service.
Nine Queens [DVD]