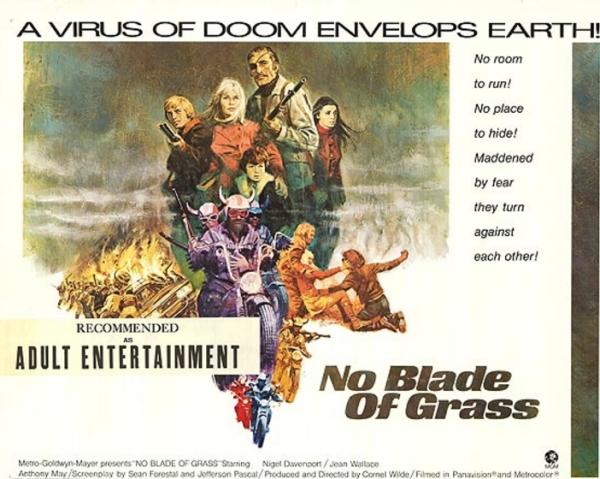 Cornel Wilde’s grim No Blade of Grass (1970) is a forgotten dystopian classic due for rediscovery. Gritty and brutal, built on fears of ecological devastation through pollution and overcrowding (with hints of genetic manipulation gone bad), this 1970 end-of-the-world thriller seems to have gotten lost in the overcrowded apocalypse now science fiction cinema of the seventies.

Imagine a survival thriller set in the collapse of civilization as directed by Sam Peckinpah. Nigel Davenport stars the husband and father who reaches back to his military service to lead his family out of the city to the safety of his brother’s estate to the north, a piece of property transformed into a veritable fort. The roads are packed with desperate and scared people, ready to do anything to protect themselves and their own and this father treats the panicked citizens of his once-peaceful country as potential enemies.

You can see films as diverse as Mad Max and The Road springing from this film. Wilde’s film isn’t as thrilling as the former or as polished as the latter. He’s a provocateur, favoring primal images to make his points, and No Blade of Grass is as blunt and grim as it is ambitious, a warning of the stresses we put on the planet and a commentary on the nature of humanity under pressure reverting to a kind of tribal behavior in the wake of social breakdown. It is still shocking to see government instituting martial law and its heroes shooting policemen and soldiers to survive. Wilde makes no pretence of these people struggling with the moral questions at hand. They act and weigh the moral consequences afterwards.

Wilde is best known for his earlier survival thriller The Naked Prey and once again he goes for the visceral, delivering an ecological message writ large and an unforgiving portrait of humankind reverting to primitive form in the face of crisis. If it’s rough around the edges, it is also directed with a matter-of-fact presentation of desperation and savagery. It makes the disclaimer at the end credits particularly evocative: “No living thing was harmed in the making of this motion picture.”

, iTunes, GooglePlay, Fandango, Vudu and/or other services. Availability may vary by service.
No Blade of Grass [DVD]

On DVD from Warner Archive with no supplements.