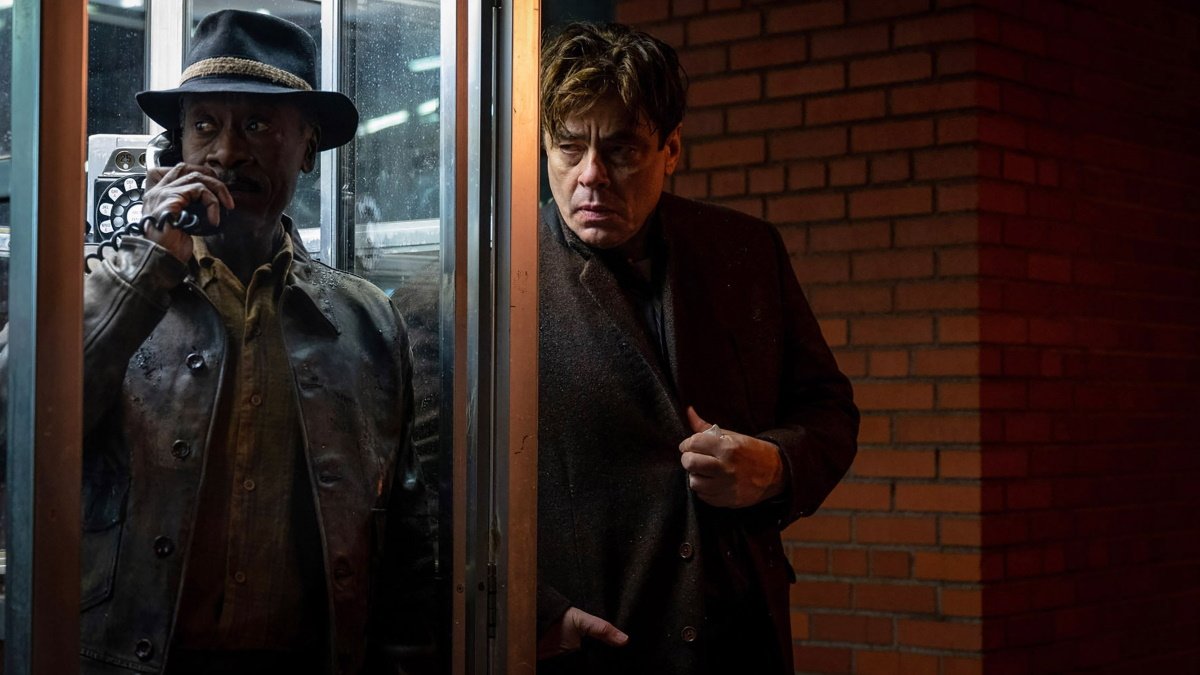 Don Cheadle and Benicio Del Toro star as small time criminals in 1954 Detroit who end up in the middle of a tangled conspiracy in “No Sudden Move” (2021, R), a stylish, snappy crime thriller from Steven Soderbergh. They aren’t friends and only become wary allies out of necessity when what is supposed to be an easy job goes way, way wrong and puts them in the crosshairs of very powerful forces. David Harbour, Amy Seimetz, Jon Hamm, Kieran Culkin, Brendan Fraser, and Ray Liotta costar. Available July 1, same day it opens in theaters, and streams for 31 days. (HBO Max)

The future is in the hands of today’s civilians in “The Tomorrow War” (2021, PG-13), starring Chris Pratt as a schoolteacher who travels thirty years into the future to battle an alien invasion. Yvonne Strahovski, Betty Gilpin, and J.K. Simmons costar in the science fiction action thriller from “The Lego Batman Movie” director Chris McKay. Originally intended for theaters, it debuts as a streaming exclusive. (Amazon Prime)

Ahmir “Questlove” Thompson makes his directorial debut with documentary “Summer of Soul” (2021, PG-13), featuring performances by Stevie Wonder, Nina Simone, Sly & the Family Stone, Gladys Knight & the Pips, and others from The Harlem Cultural Festival from the summer of 1969. It won awards at Sundance and streams the same day it opens in theaters. (Hulu)

Also streaming the same day as theaters is the animated sequel “The Boss Baby: Family Business” (2021, PG) featuring the voices of Alec Baldwin and James Marsden as the now-adult brothers facing a new boss baby. (Peacock)

“Bill & Ted Face the Music” (2020, PG-13) reunites Keanu Reeves and Alex Winter as the fun-loving duo as middle-aged father in arrested adolescence who go on a new excellent adventure with their teenage daughters (Samara Weaving and Brigette Lundy-Paine). It’s as sweet, whimsical, and fun as the original comedies. (Hulu and Paramount+)

Lakeith Stanfield stars as a career thief who agrees to turn informant in “Judas and the Black Messiah” (2021, R), a drama based on the true story of the FBI’s infiltration the Black Panthers and the murder of Black Panther Chairman Fred Hampton (Daniel Kaluuya). Previously available for a 31-day window, it returns to HBO Max.

Classic picks: Alfred Hitchcock’s “Rear Window” (1954) is one of his most entertaining thrillers, and “Vertigo” (1958) was voted the greatest film ever made in an international poll. Both star James Stewart. (Amazon Prime)

Judi Dench is “Red Joan” (2018, R) in the drama based on the real-life story of the KGB’s longest-serving British spy.

True stories: the limited series “Sophie: A Murder in West Cork” (not rated) is a true crime documentary on the investigation of a French producer on vacation in Ireland in 1996.

Ron Perlman plays “Hellboy” (2004) in the original film directed by Guillermo del Toro from the comics by Mike Mignola.

Daniel Craig and Rooney Mara takes the leads in the American version of “The Girl with the Dragon Tattoo” (2011, R), directed by David Fincher. (Amazon Prime and Hulu)

Kristen Stewart is an American “Personal Shopper” (France, 2016, R, with subtitles) to a French celebrity in Paris in the enigmatic ghost story/murder mystery from filmmaker Olivier Assayas.

“Whip It” (2009, PG-13), the directorial debut of Drew Barrymore, stars Elliot Page as a Texas high school kid who rebels by joining a roller derby team.

True stories: the documentary “Stray” (2020, not rated) follows the lives of homeless dogs living on the streets of Istanbul.

True stories: “The Legend of the Underground” (2021, TV-MA) follows a group of non-conforming Nigerians escaping punitive laws in safe houses in Lagos and Harlem.

The limited series “Smother” (not rated) is a crime drama set on the rugged coast of Ireland, stars Dervla Kirwan as a woman discovering family secrets as she investigates the murder of husband. All six episodes available.

The documentary feature “Rebel Hearts“ (2021, not rated) chronicles the story of the nuns who protested for social justice and fought the Vatican for their autonomy in 1968 Los Angeles. Streams days after its limited theatrical release.

The award-winning “No. 7 Cherry Lane” (Hong Kong, 2019, not rated, with subtitles), an animated romantic drama set against the 1967 anti-British riots in Hong Kong, makes its streaming premiere.

It toplines an impressive 30-film “Art-House Animation” festival that encompasses over 70 years of films, from the fabulist German features of Karel Zeman to Martin Rosen’s screen versions of Richard Adams’ “Watership Down” (1978, PG) and “Plague Dogs” (1982, PG-13) to the allegorical stop-motion fantasies of Czech filmmaker Jan Švankmajer. Here a just a few highlights in a cornucopia of animated treasures:

Also new this month is the Film Foundation restoration of John Ford’s Technicolor frontier classic “Drums Along the Mohawk” (1939) with Henry Fonda and Claudette Colbert;