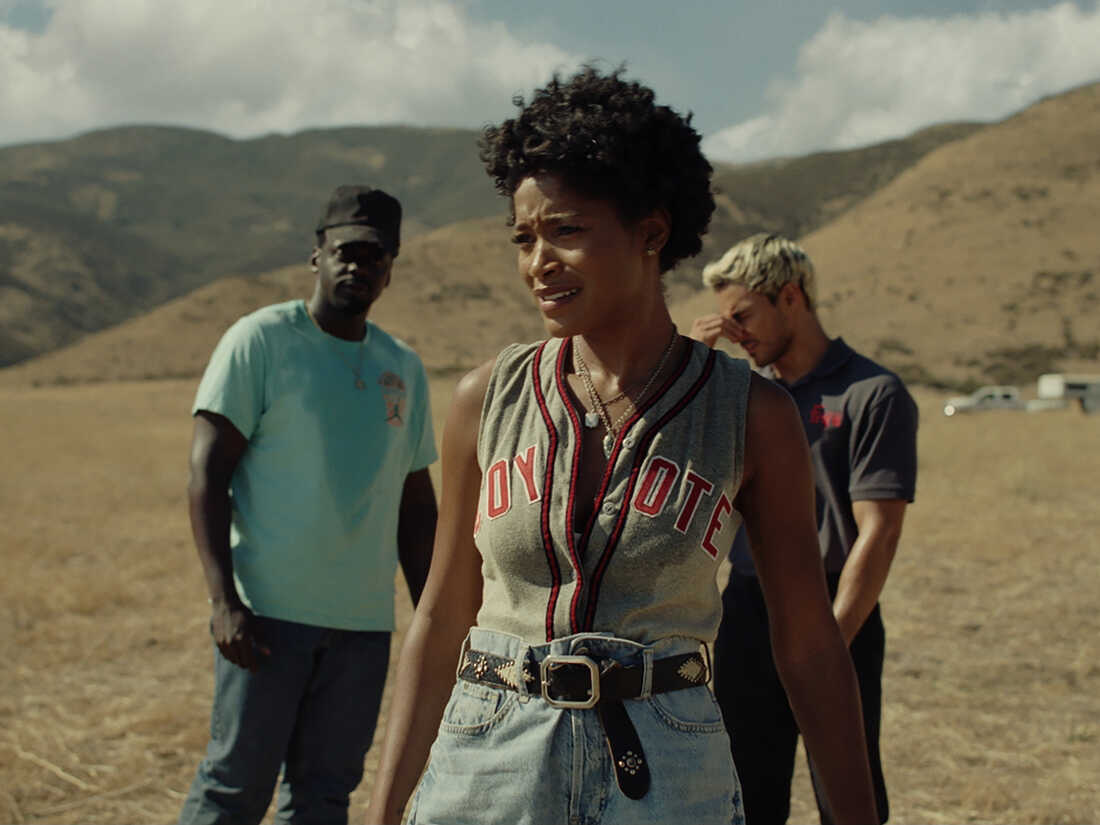 There’s something mysterious—and dangerous—in the skies above a California horse ranch in “Nope” (2022, R), Jordan Peele’s third film as a director and to date his most ambitious. Daniel Kaluuya and Keke Palmer star as siblings who investigate the strange phenomenon in this fascinating (if overstuffed) mix of modern western, alien invasion thriller, and ecological parable, set against the vast open range and clear blue skies that Peele so expertly uses. (Peacock)

An English nurse (Florence Pugh) travels to a remote Irish village in 1862 in “The Wonder” (2022, R) to investigate a miracle: a young girl (newcomer Kíla Lord Cassidy) who has stopped eating yet remains healthy. Tom Burke costars as a London reporter in this adaptation of the novel by Emma Donoghue by filmmaker Sebastián Lelio. Toby Jones, Ciarán Hinds, Brían F. O’Byrne, and Elaine Cassidy costar. (Netflix)

Jesse Eisenberg stars in “Fleishman is in Trouble: Season 1” (TV-MA) as a recently divorced father of two whose new single life is complicated when his ex (Claire Danes) suddenly disappears and he’s left to raise their two children while trying to understand how their marriage unraveled. Lizzy Caplan costars as the father’s old friend, a journalist whose reporting serves as a kind of narrator, and Taffy Brodesser-Akner adapts her own novel for the screen. Two episodes available, new episodes on Thursdays. (Hulu)

“Tulsa King: Season 1” (TV-MA), the new original series from “Yellowstone” creator Taylor Sheridan, stars Sylvester Stallone (in his first TV role) as a mafia capo who emergences from a 25-year prison sentence to find himself sent from New York City to the Midwest to form a new cartel in Oklahoma. “Boardwalk Empire” creator Terence Winter is showrunner. New episodes on Sundays. (Paramount+)

Ryan Reynolds, Will Ferrell. and Octavia Spencer star in “Spirited” (2022, PG-13), a musical comedy twist on the Charles Dickens classic brought up to date. (Apple TV+)

Santa (Tim Allen) discovers that the holiday magic fading and searches for a successor in In “The Santa Clauses: Season 1” (TV-PG), a small screen sequel to holiday comedies. Two episodes available, new episodes on Wednesdays. (Disney+)

Peter Billingsley reprises his role as Ralphie Parker in “A Christmas Story Christmas” (2022, TV-14), a sequel to the beloved 1983 holiday comedy with Ralphie now a father himself. (HBO Max)

A genie (Idris Elba) released from an ancient vessel reveals his “Three Thousand Years of Longing” (2022, R) to a lonely scholar (Tilda Swinton) in this epic romantic fantasy from director George Miller.

A young woman (Daisy Edgar-Jones) raised alone in the marshes of the Deep South is now suspected of murder in “Where the Crawdads Sing“ (2022, PG-13), based on the novel by Delia Owens.

True stories: “I Am Vanessa Guillen“ (TV-14) follows a family’s fight for justice for a female soldier harassed and murdered on a US Army base in 2020 and “Stutz“ (2022, R), from actor-turned-filmmaker Jonah Hill, deftly introduces audiences to tools offered by psychiatrist Phil Stutz.

Streaming TV: Christina Applegate and Linda Cardellini are back for the third and final season of “Dead to Me“ (TV-MA). There are also new seasons of the animated “The Cuphead Show!“ (TV-Y7) and “Inside Job“ (TV-MA) and the seasonal “The Great British Baking Show: Holidays“ (TV-14).

International passport: a college girl has a secret life as a part-time assassin in the action thriller “The Violence Action“ (Japan, 2022, TV-MA, with subtitles).

Jessica Chastain and Ralph Fiennes are wealthy Americans in Morocco who cover up the accidental killing of a young boy in “The Forgiven“ (2022, R), an adaptation of the Lawrence Osborne novel by filmmaker John Michael McDonagh.

Native American boxer (Kali Reis) goes undercover to find her missing sister in “Catch the Fair One“ (2021, not rated), a revenge thriller inspired by a true story.

More true stories: “Fire of Love“ (2022, TV-14) profiles French scientists Katia and Maurice Krafft, who lived and died studying volcanoes together and “Mickey: The Story of a Mouse“ (2022, TV-PG) explores the birth and evolution of Walt Disney’s signature cartoon character.

Kristen Bell and Ben Platt are dysfunctional American siblings at an English wedding in the raunchy comedy “The People We Hate at the Wedding“ (2022, R).

“Pickled“ (2022, not rated) is a TV special featuring celebrities (among them Will Ferrell and Emma Watson) competing at pickleball for charity. Stephen Colbert hosts.

A thirty-something party girl (Roisin Gallagher) leaves London to moves back home with her Dublin family in the Irish dramedy “The Dry: Season 1“ (not rated). (AMC+ and Sundance Now)

A gang holds hotel guests hostage in the action thriller “Crossfire“ (not rated), a limited series from producer/star Keeley Hawes.

A divorced mom opens a bakery to launder five million euros in the crime comedy “Dough: Season 1“ (Sweden, not rated, with subtitles). New episodes on Thursdays.

Ten films “Starring John Garfield” are presented with an introduction by Garfield’s daughter, actor and acting instructor Julie Garfield, and include film noir classics “The Postman Always Rings Twice“ (1946) with Lana Turner, “Force of Evil“ (1948), and “The Breaking Point“ (1950).

True stories: “CzechMate: In Search of Jiří Menzel“ (India, 2018, not rated, with subtitles) is a genuine documentary epic: a 7 ½ hour in-depth portrait of the Czechoslovak New Wave director.

An aspiring poet (Benjamin Voisin) in 19th century Paris succumbs to the lure of easy money in “Lost Illusions“ (France, not rated, 2021, with subtitles).

The cult miniseries “The Kingdom I“ (Denmark, 1995, with subtitles) from filmmaker Lars von Trier plays out in a haunted hospital. Also new:

The Robin Hood team of the corporate world returns to take on the corrupt and the criminal in “Leverage: Redemption: Season 2“ (2022, TV-14). New episodes on Wednesdays. (Amazon Freevee)