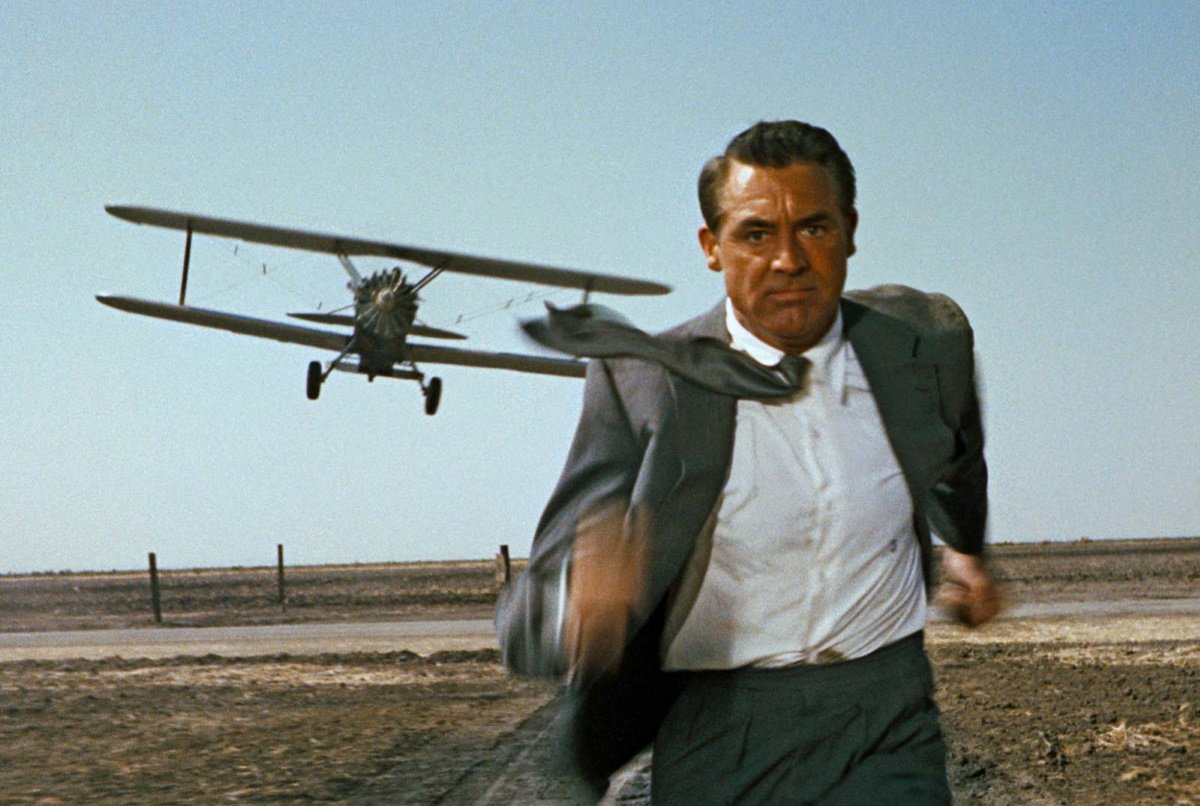 “For me, cinema is not a slice of life but a piece of cake.” – Alfred Hitchcock

Hitch never made a more purely entertaining film than North by Northwest (1959), a classic “wrong man” thriller with a romantic cast and a breathless series of adventures through a cross-country romp.

Cary Grant, long past his days as a matinee idol, is effortlessly suave and charming and completely convincing as glib, sheltered New York advertising executive Roger O. Thornhill (his monogram is ROT) who, in a purely random twist of fate, is mistaken for a master spy. Suddenly his safe routine is turned upside down by armed thugs, foreign agents, and a beautiful femme fatale (Eva Marie Saint, utterly seductive in her first and only role as a frosty seductress).

Hitchcock was also a master of the imaginative set piece and two of his best set off this movie. Even if you’ve never seen a Hitchcock film you may know the film signature scene featuring Grant, crisply dressed in a business suit, fleeing a malevolent crop duster in a remote cornfield in the middle of nowhere, and the finale sends Grant scrambling across the faces of Mount Rushmore.

James Mason is coolly sinister as the continental spy whose cultured manner covers a cold-blooded operative and Martin Landau is superb as his right hand man, not just suspicious of his glamorous girlfriend but downright jealous. Hitchcock let the suggestions of an attractive beyond loyalty simmer under the surface.

Ernest Lehmann wrote the original screenplay specifically for Hitch. “I wanted to make the Hitchcock picture to end all Hitchcock pictures,” he explained years later. “Something that has wit, sophistication, glamour, action, and lots of changes of locale.” He succeeded. Everything clicks and sly fox Hitch slides more sexual innuendo and erotic flirtation into the film than most R rated films accomplish, while the breezy smoothness hides an undercurrent of tension and a complete mistrust of authority. And along with the inventive action scenes, glamor, and romance, there is sparkling dialogue and a magnificent score by the great Bernard Herrmann.

It earned three Academy Award nominations, including one for Lehmann’s original screenplay, and was added to the National Film Registry in 1995.

The Blu-ray and DVD editions feature an engrossing commentary track by screenwriter Ernest Lehmann, the smartly directed 40 minute documentary “Destination Hitchcock: The Making of North by Northwest” and the 2003 TCM documentary “Cary Grant: A Class Apart.”

The Blu-ray special edition adds the original hour-long documentary “The Master’s Touch: Hitchcock’s Signature Style,” a superb tour through famous Hitch moments via interviews with critics and directors (including Martin Scorsese and John Carpenter, who share the lessons they learned from the master) and a rich collection of clips from the breadth of this career, and the 25-minute “North by Northwest: One for the Ages.”