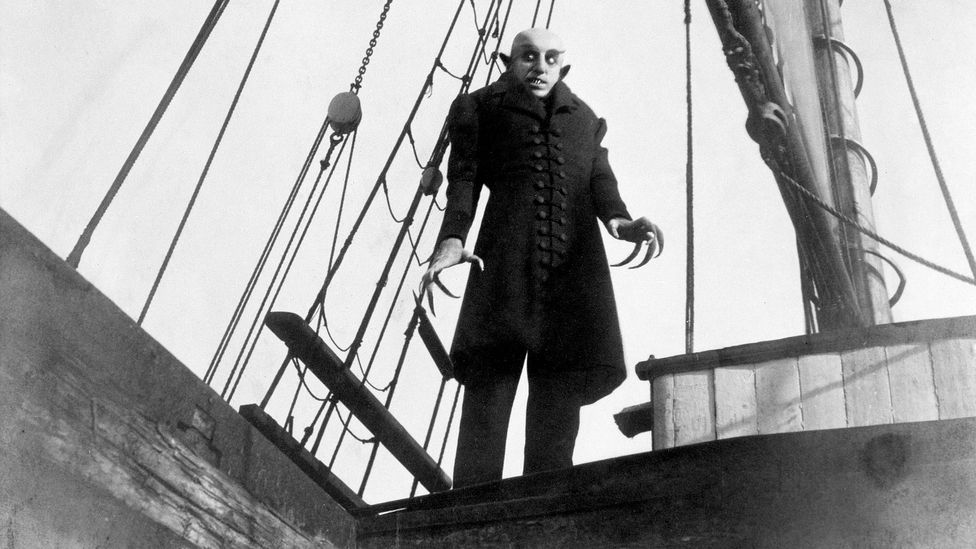 The first screen adaptation of Bram Stoker’s “Dracula” in everything but name, F.W. Murnau’s Nosferatu (1922, also known as Nosferatu: A Symphony of Horror) remains the most beautiful and resonant interpretation of the defining vampire novel.

Murnau shifted the home of the Harkers from England to Germany and changed the appearance of his character from a seductive gentleman to a grotesque demon with his claw-like hands, bald head, and sharp bat-like ears, and Schreck plays the vampire as true creature of the night. He is decidedly not human. Even when he rises from his coffin he has a supernatural stiffness, like a tent pole pulled upright. When the eerily empty ghost ship carrying his coffin arrives in Thomas’ home port, a river of rats pour out and spread through the town like a plague.

Perhaps the most powerful change from the novel is the absence of Van Helsing and the richer realization of Ellen, the would-be victim whose innate sensibility and solemn spirituality gives her a spooky connection with the vampire. With his stark, symbol laden visual scheme and sacrificial conclusion Murnau creates a more mythic tale than any subsequent adaptation of Stoker’s novel.

Murnau’s adaptation was wholly unauthorized and the change of name and ghastly appearance didn’t fool the Stoker estate. It became the center of lawsuit which the stoker estate won, resulting in the court ordering all copies of the film destroyed. Thankfully, though the negative was lost, prints of this masterpiece escaped and the film survived.

In addition to the many film versions of Dracula that followed, Werner Herzog directed a remake of Murnau’s Nosferatu (1979) with Klaus Kinski in the lead and E. Elias Merhige directed Shadow of the Vampire (2000), a fictionalized take on the making of Murnau’s film with Willem Dafoe as actor Max Schreck, who in this reimagined account is an actual vampire himself. Robert Eggers has also been planning his own remake of the film.

Due to its legal history, the film fell into the public domain long ago and thus many substandard editions are available from various services. It has been restored by various organizations, most recently by the Friedrich-Wilhelm-Murnau-Stiftung in Germany (released in the U.S. by Kino). We only recommend the high quality editions at Stream On Demand.

Roger Ebert featured the film as one of the “Great Movies” on his website.

Silent with intertitles and musical score, in black and white with tints.

Add to My List on AMC+ or to My List on Shudder or stream free on Kanopy, which is available through most public and college library systems.

Kino’s restored DVD and Blu-ray releases were mastered in HD from the archival 35mm restoration by the Friedrich-Wilhelm-Murnau-Stiftung and features separate versions of the film, one with newly-translated English intertitles and another with original German intertitles (with optional English subtitles), both color tinted and accompanied by Hans Erdmann’s original 1922 score. It also includes the supplements from the previous Kino release: 52-minute documentary “The Language of Shadows: The Early Years and Nosferatu,” a three-minute featurette on the digital restoration, lengthy excerpts from other eight other Murnau silent films, and a stills gallery.