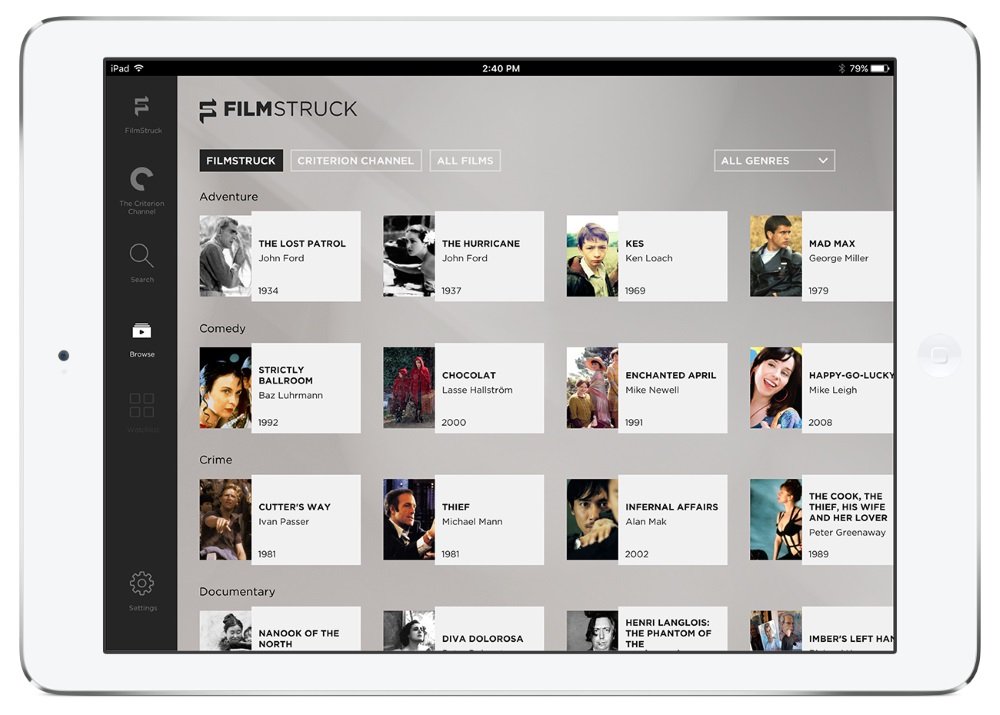 FilmStruck is the streaming service that lovers of classic and world cinema have been waiting for. The wait is now over: the service is live as of Tuesday, November 1.

A collaboration between Turner Classic Movies and The Criterion Collection, FilmStruck is most notably the new (and soon to be exclusive) home of the Criterion library, which has previously been available through Hulu (it leaves Hulu for good on November 11). That means everything from the films of Akira Kurosawa, Satyajit Ray, Chantal Akerman, and John Cassavetes to classics of French cinema from the 1930s through the French New Wave to documentaries and classics films from all around the world. It includes films that have been released on Blu-ray and DVD from Criterion, as well as select interviews and documentaries from those home video releases, and films that have not yet been released to disc in the U.S., such as the work of Japanese director Keisuke Kinoshita.

Criterion is also making deals to stream films that are not part of its own library but fit into the streaming channel’s dedication to offering the best editions of American and international classics, landmark documentaries, and fascinating cult films.

The site is now live and I’ve spent a couple of hours exploring it. The options are dizzying: over 400 features, TV programs, and collections of short films from the silent era to the present and from every continent but the Antarctic. The quality is good, though I’ve only streamed it on my desktop.

The browse function is awkward—the alphabetical sort hasn’t been programmed to drop “A” and “The” from the title, so A Woman’s Face (1938) shows up before Adua and Her Friends (1960) and The 400 Blows (1959) comes after Tanner ’88 (1988), and the Chaplin shorts fall under umbrella titles like Chaplin’s Mutual Comedies Part 3—and the search function is a too open-ended for a quick sort. Search The Immigrant (1917) you have to scroll through hundreds of titles before you get to Chaplin’s Mutual Comedies Part 3. Adding keywords helps, but it still needs fine tuning to make it useful.

The service offers two subscription options: the basic FilmStruck subscription, which features a rotating selection of hundreds of curated films and collections as well as hosted introductions and exclusive interviews and featurettes, and the FilmStruck + The Criterion Channel subscription which adds in unlimited access to Criterion’s entire streaming library of film and special features.

It’s now available via desktop, Android and iPhone/iPad, and Amazon Fire TV, with Roku, Chromecast, and Apple TV to come.