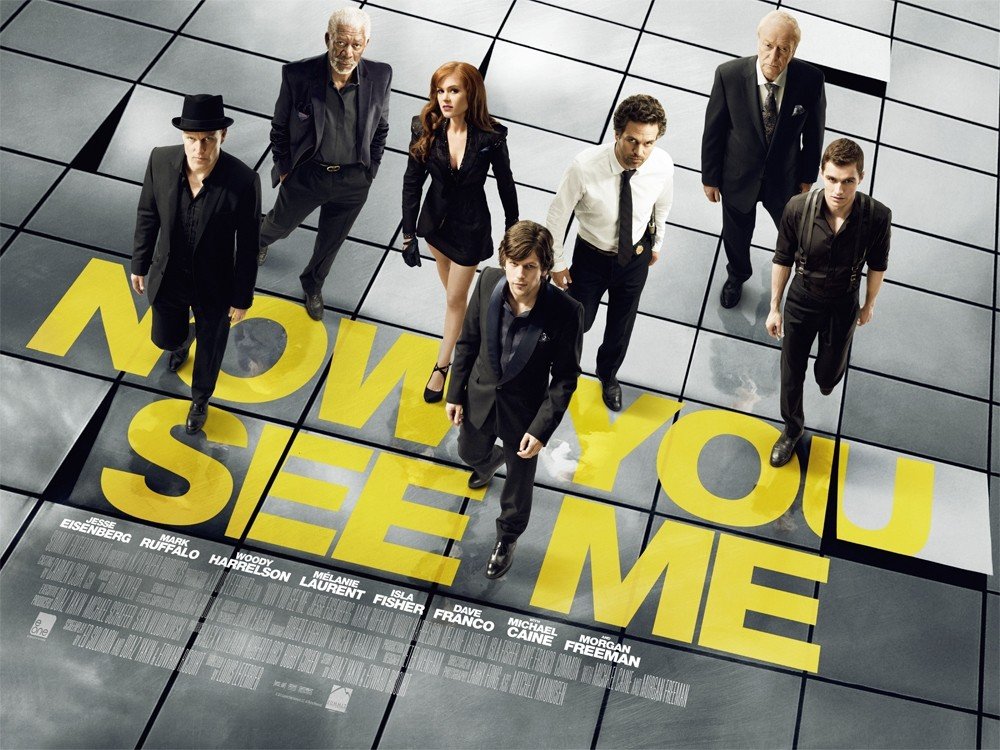 Now You See Me (2013) combines magicians, con games, high-concept heists, and an elaborate revenge plot in a colorful story that zips along from scene to scene with the momentum of an adrenaline-charged action film.

That’s something of a specialty for director Louis Letterier, who apprenticed on Luc Besson’s EuropaCorp production and graduated to director on The Transporter (which he took over from original director Cory Yuen, who retained credit on American prints) and Unleashed. Now You See Me is more high concept heist movie than action film, with a team of guerilla magicians (Jesse Eisenberg, Woody Harrelson, Isla Fisher, and Dave Franco) banding together for their elaborate sleight-of-hand robberies, all executed while on stage in front of a live audience.

Mark Ruffalo is the apoplectic police detective, driven to exasperation by the antics of “The Four Horsemen” (as the crew calls their flashy stage act), Melanie Laurent the Interpol agent called in when the team robs a bank in Paris without leaving their Vegas stage, and Morgan Freeman coasts through the role of the debunker, a guy who makes his living revealing the secrets of magician’s tricks.

The script plays fast and loose with logic and credulity and Letterier leans far more on CGI than old-school stagecraft magic, but the energy provided by Letterier’s driving pace and swirling cameras (which frankly get a little too dizzying at times, distracting us from what’s actually happening on screen) keep the film bouncing along and the fizzy cast chemistry keeps the tone buoyant and fun.

It was followed a few years later by Now You See Me 2, an even sillier romp with Lizzy Kaplan taking over for Isla Fisher and Daniel Radcliffe stepping in for villain duties. Director Jon M. Chu never manages to give it the energy and style to distract audiences from the script’s shortcomings.

The Blu-ray and DVD features commentary by director Louis Letterier and producer Bobby Cohen and the featurette “Now You See Me Revealed. The Blu-ray features an extended edition, which runs ten minutes longer, along with the theatrical version, an additional featurette and deleted scenes.