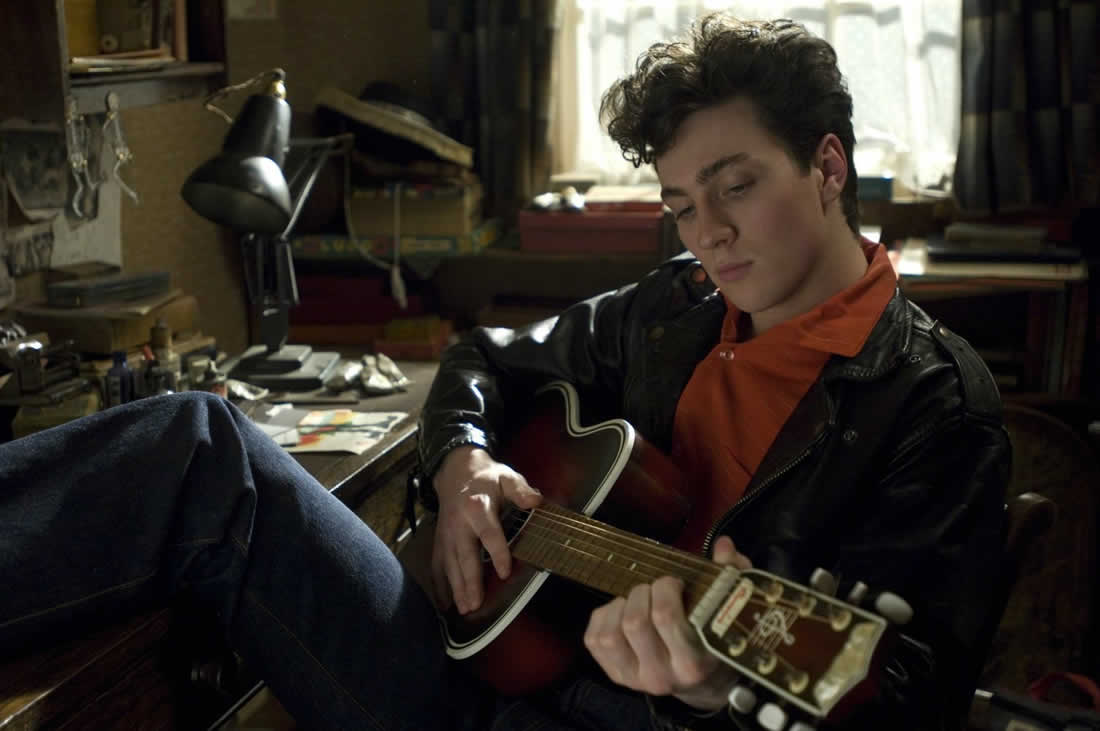 Nowhere Boy (2009) tells the story of the early life of John Lennon, the man who would put together the Beatles as a teenage boy.

What’s marvelous about the film is that it isn’t elevated into some mythological status. There are none of those clichéd lines where someone in the group or some prescient member of their early audience predicts their greatness or prophesizes how they will “change the future of music.” Rock and roll isn’t Lennon’s destiny. It’s his salvation. These are just British boys brought together by a restless, emotionally knotted teenage Lennon, a kid whose artistic impulses and rebellious tendencies serve him poorly in high school but drive him to create a skiffle band. All they have in common is a love of American rock and roll and the charge of playing in front of an audience.

Aaron Taylor (Kick-Ass) is utterly convincing as the “Goon Show”-loving John, raised by his Aunt Mimi (Kristin Scott Thomas) and Uncle George, whose smoldering issues of abandonment by his mother, Julia (Anne-Marie Duff), are fanned into flames when George dies and Julia suddenly reappears (“the one with red hair,” is how John refers to her at the funeral) and becomes a part of his increasingly emotionally turbulent life.

Nowhere Boy shines a light on details from a part of Lennon’s life that few beyond the most passionate fans know—John’s reconnection with his mother and the first shows of his proto-Beatles band, the Quarrymen—but it’s rewarding because the story is not about the formative life of a star, but the emotional life of a boy who never knew his father and was abandoned by his mother. (It’s not that simple, of course, but to a teenage boy it sure feels that way.) It’s also the story of sisters—both mothers to the artistically inclined and reflexively rebellious schoolboy—and the choices of the past that continue to haunt and divide them.

When Paul McCartney saw the film, he reportedly had one criticism: Mimi wasn’t as severe and strict and emotionally inexpressive as shown in the film. A fair point, and surely a dramatic choice to contrast the reserved, guarded Mimi and the borderline manic-depressive Julia. Mimi seems unable to show affection, but Scott Thomas is marvelous at showing pain and love and anxiety behind the vulnerable eyes of a hard face, while Duff offers a portrait of a woman who lets the charge of excitement and joy sweep her into giddy excess, a problem that her protective husband (David Morrissey) is all too aware of. It’s not hostility he harbors for John, merely a wariness that her renewed affections will push her back into “illness” (as her condition is vaguely termed).

There are minor historical liberties taken with the story but the details and textures are lovingly crafted by director Sam Taylor-Wood (now Sam Taylor-Johnson), from fifteen-year-old Paul’s (Thomas Sangster) audition, playing Eddie Cochran’s “Twenty Flight Rock” on a left-handed guitar (this may be the first film to imagine that first meeting between Lennon and McCartney on the screen) to the authentic skiffle sounds of the perfectly recreated debut show of The Quarrymen, playing on the back of a flatbed truck. Most importantly, the film offers a very human story. We watch because it’s the story of John Lennon but we care because it’s an emotionally honest and human story.

Streams free on Kanopy or on Hoopla, which are available through most public and college library systems.

, iTunes, GooglePlay and/or other services. Availability may vary by service.
Nowhere Boy [Blu-ray]

The DVD and Blu-ray releases both include two featurettes (don’t expect any insight from what are little more than colorful promotional pieces) and two deleted scenes.