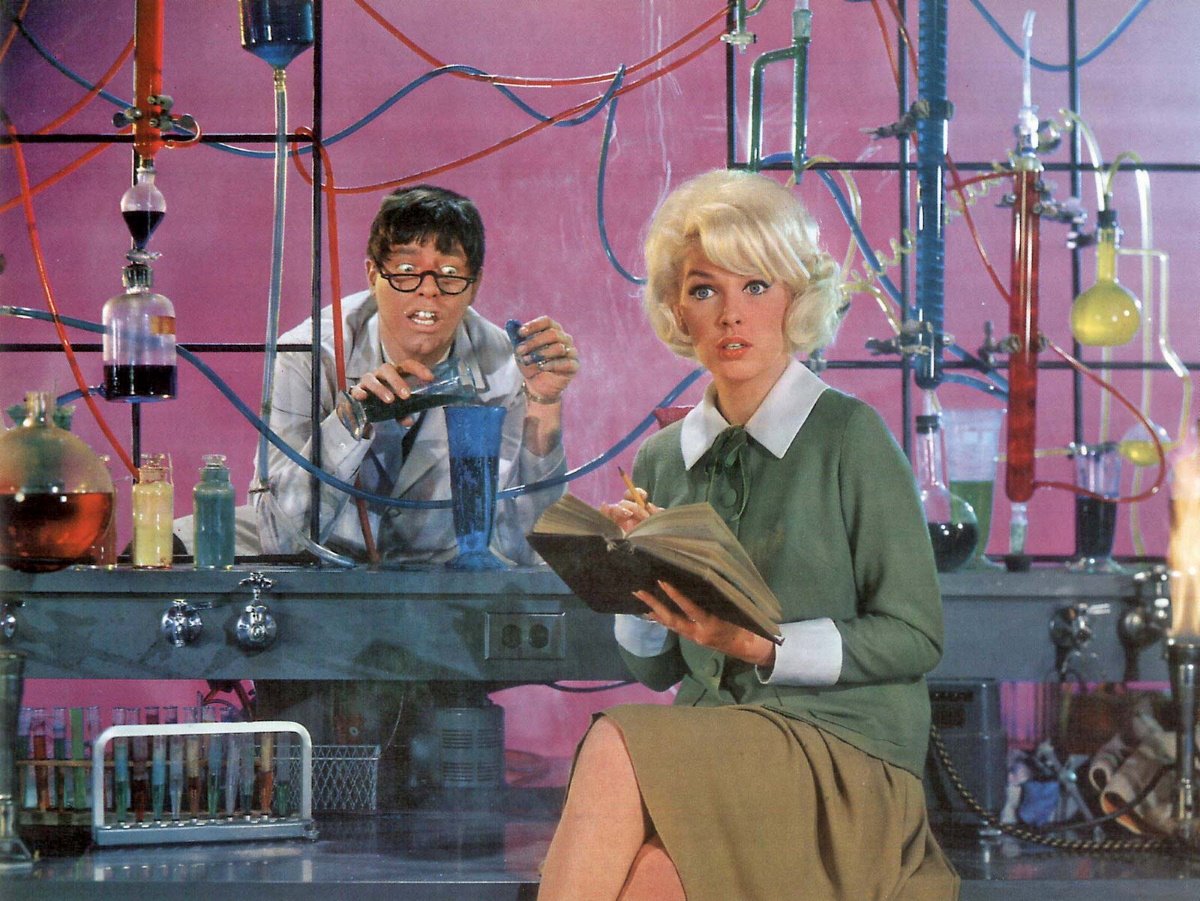 Lewis plays him as a buck-toothed social misfit with an adenoidal voice and a spasmodic, childlike body slumped into a walking shrug. When this Dr. Jekyll reaches deep inside to release his Mr. Hyde, he unleashes Buddy Love, a creepy lounge lizard as confident, popular, aggressive ladies’ man, a monster so self-absorbed and full of contempt for his adoring fans that his popularity itself is a perverse joke. Stella Stevens plays the object of his affections: college girl Stella Purdy, a party girl with a streak of compassion for Kelp.

It’s an inappropriate relationship to be sure and Lewis has a pretty immature take on the relationships in the film, but it’s also a cartoon of a comedy, from its big crazy sight gags to the outsized performances. Lewis creates a wildly unreal world, from dollhouse versions of college classrooms and labs to a nightclub that looks like a velvet bachelor pad fantasy gone haywire.

What makes it all work is the edge that Lewis brings to the cartoonish psychology of his Jekyll and Hyde pairing: Kelp’s addiction to being Buddy and the sheer social sociopathy of Buddy. Meanwhile he goes to town on two big scenes, a transformation that adds candy colors to the classic mad scientist metamorphosis and Kelp’s big entrance.

It’s cynical, outrageous, and hilarious, without all that squirmy boy-man comedy of immature adults from his other work. And it remains my favorite Lewis film.

Familiar Lewis foil Kathleen Freeman costars with Del Moore as the college dean and Les Brown and his Band of Renown as themselves.

It was added to the National Film Registry in 2004.

Add to My Watchlist on Amazon Prime or to My List on Paramount+ or watch free on Kanopy, which is free from most public and college libraries.

On Blu-ray and DVD, and available in the four-disc box set The Nutty Professor: 50th Anniversary. It features a new, beautifully mastered edition with a clean, clear, sharp image and colors that pop, the way that Lewis intended, plus two additional Lewis films on DVD, a bonus CD and other bonus goodies. New to disc is the 20-minute featurette “Jerry Lewis: No Apologies,” which catches up with Lewis at age 87, while the commentary by Lewis and his friend Steve Lawrence (who comes off as a kind of sycophant or yes man, adding little to the conversation beyond a constant stream of praises) and other featurettes, archival clips, deleted scenes and outtakes and other supplements are carries over from the earlier DVD special edition.

Also features DVD re-releases of films previously available as singles: Cinderfella (1960), directed and written by Frank Tashlin, the best of Lewis’ directors and the filmmaker who most influenced his own directorial style, and the Lewis-directed The Errand Boy (1961), both with commentary by Lewis and Steve Lawrence. There’s also a bonus CD of “Phoney Phone Calls,” recordings of prank calls that Lewis made and recorded between 1959 and 1972 and originally released to disc in 2001.

The box also features booklets with reproductions of storyboards, a cutting script with Lewis’ notes, and a recreation of his self-published illustrated “Instruction Book for Being a Person” that he wrote and handed out to the cast and production crew of The Nutty Professor, and “A Personal Message from Jerry Lewis” written for this release.