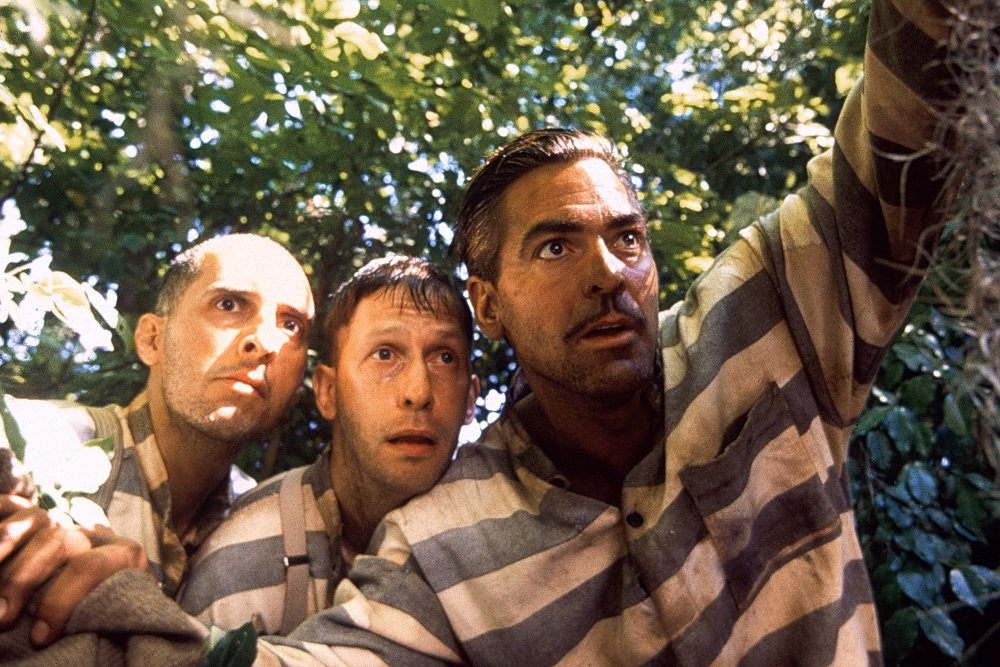 In the opening credits of Joel and Ethan Coen’s O Brother, Where Art Thou? (2000), their depression-era prison break movie-turned-screwball odyssey through the Deep South, is the attribution: “Based upon The Odyssey by Homer.” It’s a cheeky proclamation and it doesn’t take a classical scholar to note that, if it’s indeed true, they’ve taken liberties with the material.

George Clooney comes on like a screwball Clark Gable as the fast-talking but slow-witted convict Everett, a greasy con-man who drags a couple of dim bulbs (a tetchy John Turturro and a sweetly stupid Tim Blake Nelson, both of whom spend much of the film with mouths agape and eyes glazed over) on his escape from the chain gang. And drag them he does, almost literally, as they are chained together in those opening scenes. Once they throw off those chains, he appoints himself leader of their quest to uncover a buried treasure in a valley scheduled to be flooded.

Along the way they have their fates foretold by a blind seer, become enchanted by the seductive song of a trio of women washing in the river (the Sirens), are attacked by a giant of a one-eyed salesman (John Goodman, standing in for the Cyclops) and race to Everett’s home town to stop his abandoned wife, Penny (Holly Hunter as a tart Penelope), from marrying another man. Did I mention that Everett’s given name is Ulysses?

It has a remarkable (if playfully skewed) fidelity to the epic poem of mythical struggle, even if the filmmaking brother act never actually read Homer’s work. (They did, however, grow up on Hollywood spectacles and Ray Harryhausen fantasies based on, inspired by, or selectively cribbed from The Odyssey.) But Homer’s epic poem is merely one of many inspirations for a film that Joel described as “the Lawrence of Arabia of hayseed comedies.” They pick up a blues guitarist (Chris Thomas King) on his way to the crossroads to seal his deal with the devil (a classic blues legend), tag along with Baby Face Nelson on a bank robbery spree (“My name is George Nelson! Not Baby Face!”) and crash a Ku Klux Klan rally that looks like a marching band halftime show and plays out like a scene from The Wizard of Oz.

Coen’s O Brother, Where Art Thou? is a Coen odyssey reworked as a tall tale in the folk song idiom of superstition, magic realism and religious mysticism and delivered with a mix of screwball goofiness and intellectual whimsy. It spins a surreal story from imagination, inspiration and ingenuity. And it is flat-out hilarious.

It earned Oscar nominations for its screenplay and cinematography and the “old-timey” blues, folk, gospel and country that fills the soundtrack, compiled by T-Bone Burnett and performed by such artists as Alison Krauss, John Hartford, Emmylou Harris and Gillian Welch, sparked a revival of American roots music and spawned a Grammy-winning album.

, iTunes, GooglePlay, Fandango, Vudu and/or other services.
O Brother, Where Art Thou? [DVD]

O Brother, Where Art Thou? [Blu-ray]

The Blu-ray and DVD features “The Making of O Brother, Where Art Thou,” two storyboard-to-scene comparisons and a music video.