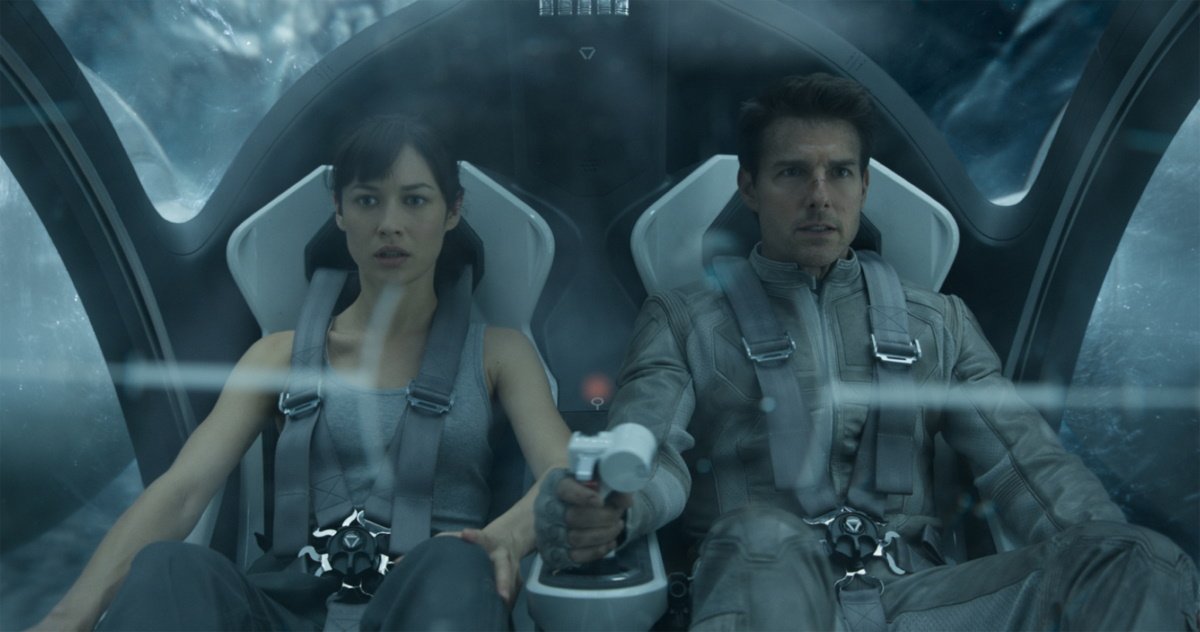 “Five years since the mandatory memory wipe and I’m still haunted by these dreams.”

There’s no denying that Oblivion (2013) is derivative. It borrows whole cloth from everything from 2001 and The Matrix to WALL-E, Moon, Independence Day, and just about every other alien invasion movie you’ve ever seen. But director Joseph Kosinski, adapting his own graphic novel, sure knows how to make it look beautiful and evocative.

Tom Cruise stars as the last man Earth (or so he thinks) patrolling the devastated planet from guerilla attacks by the remnants of an alien invasion. He dotes on his partner / colleague / lover Victoria (Andrea Riseborough), who spots for him in the station but ventures out to the surface, and returns home to a dreamy high tech apartment towering over the ruins of New York City.

Yet he has dreams of a past life with a willowy exotic lover (Olga Kurylenko), even though his memory was supposedly wiped five years ago (ostensibly to protect the human race from the “scavs,” the scavenger aliens who invaded). And while he lives in an antiseptic penthouse of steel and glass, he has a secret oasis getaway, a cabin in an impossibly lush hidden valley. You know, the romantic in him.

Cruise does what he does best here, playing the good, loyal soldier whose romantic streak drives him to bend the rules to feed his soul and satisfy his curiosity. And when he rescues a fellow human from a drone attack, he discovers that there’s another story here and is faced with one of those moments that changes everything. That’s when the film really falls into familiar rhythms.

Kosinski, who had previously made Tron: Legacy, trades in the virtual world for the physical one, a gorgeous landscape picture postcard plains, dense forests, and towering rock formations and canyons perfect for an epic chase with futuristic jets. You can see here why Cruise tapped Kosinski to direct Top Gun: Maverick a few years later. The twists aren’t all that surprising but Kosinski sure knows how stage it with scope and speed.