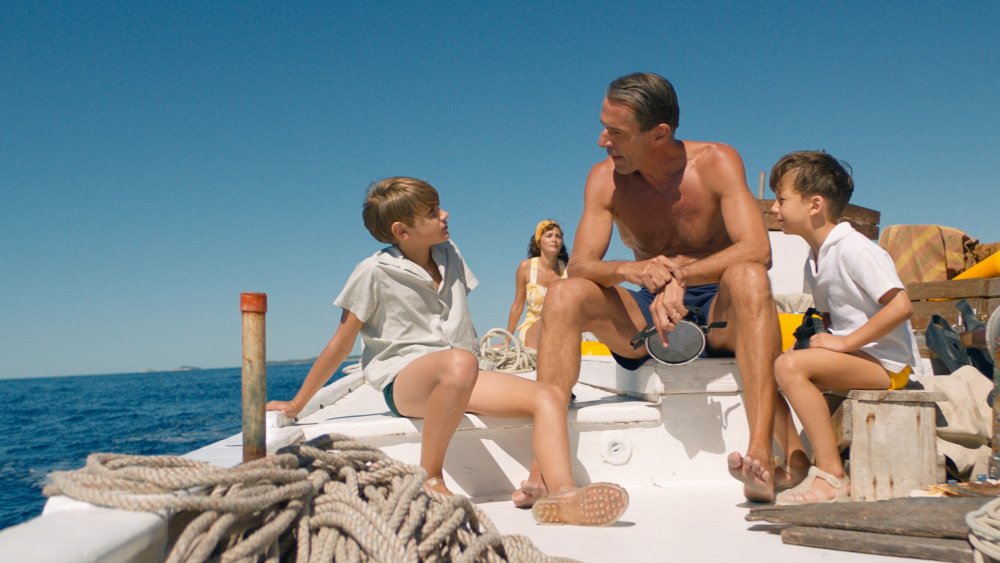 The Odyssey (France, 2016) is not Homer’s mythic quest but the epic voyage that Jacques Cousteau took around the world for years of TV documentaries on the exploration for marine life. Lambert Wilson is Jacques-Yves Cousteau in a biographical drama that presents a portrait of a man cultivating an on-screen image very different from the way he lived as an entrepreneur naturalist, always on the trail of funding to let him keep making documentaries.

The Cousteau of this film is an idealist enchanted by the act scuba diving in the beautiful undersea places on Earth and determined to create a life exploring the oceans. He purchases a second-hand ship, the Calypso, which becomes his floating home and requires enormous amounts of money to keep shipshape, and over time he becomes more committed to sustaining his funding than confront the danger that oil and pollution is doing to the ocean. It’s a slow shift as his dreams keep getting bigger, constantly outracing his funding as he pitches corporate America for more grants and American network TV for even more documentary specials.

I’m part of a generation that grew up watching The Undersea World of Jacques Cousteau documentaries, which were narrated by Rod Serling and presented a life of camaraderie with a seafaring family between the amazing undersea photography. The revelations that contradict that ideal projected in those documentaries really affected me as I watched the film.

It’s also about the rebellion from the family business of a son more committed to ecological preservation than self-promotion. Pierre Niney is Philippe, the youngest son who resents dad for packing him off to boarding school, brazenly cheating on mom (Audrey Tautou), who drinks to endure remaining part of the Cousteau business while in a loveless marriage, and basically being an absent father for his formative years. A delinquent as a teenager, he matures into a talented filmmaker who finds that the mission has strayed from the ideals and the conflicts (along with the constant chase for money to keep the whole enterprise afloat) threaten to disrupt the carefully constructed image he projects on the screen and in his public appearances.

It’s not the film you may be expecting and director Jérôme Salle, who draws from a biography by Cousteau’s eldest son and other sources, embraces more than he’s able to fully grapple with, but the exploration of the complex business structure behind the mission is really quite interesting. Wilson shows the passion for scuba diving as well as a man who quickly masters the art of the pitch and becomes such a smooth public figure he seems like a different man in the spotlight. Maybe he is. But the film also remembers to bring us back to the magic of his undersea world and the exhilaration of diving that finally helps Cousteau correct his course and remember the original mission.

Add to My Watchlist on Amazon Prime Video or stream free on Kanopy or on Hoopla, which are available through most public and college library systems.