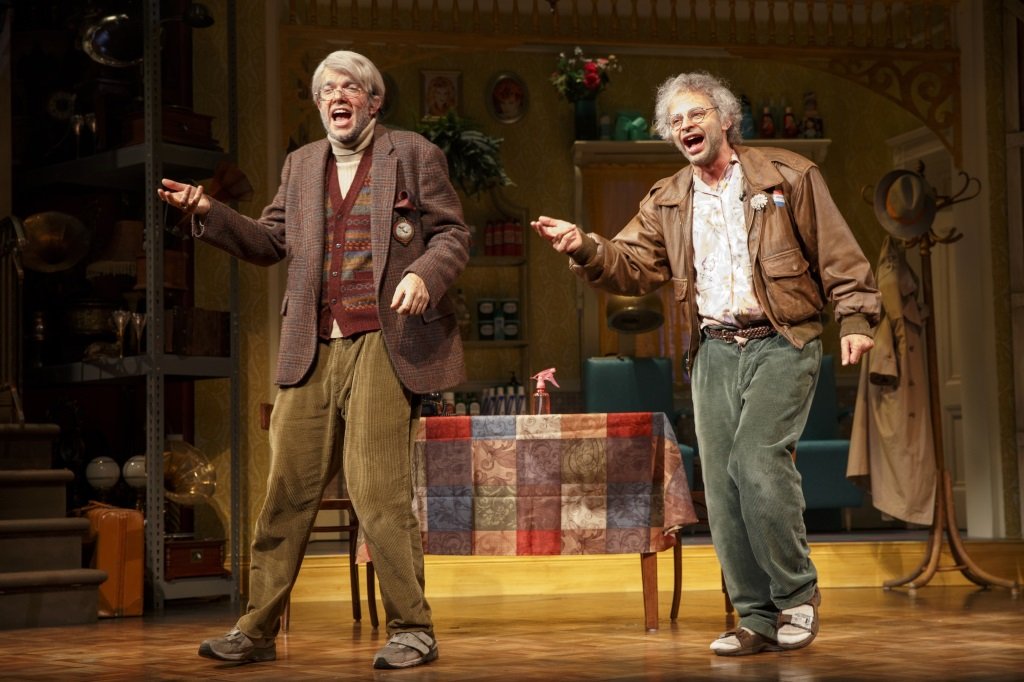 Oh, Hello On Broadway brings the hit show by Nick Kroll and John Mulaney, who originally developed the characters of show business fringe veterans Gil Faizon (Kroll) and George St. Geegland (Mulaney) over a decade ago and brought the skit characters to the stage in an off-Broadway comedy that finally hit Broadway last year, to the small screen as a Netflix exclusive.

“One part character study, one part live theater criticism, and two parts play-within-a-play, its sense of humor is deeply specific and heavily referential, but it’s also proof that a specific perspective and an alienated audience don’t necessarily go hand in hand,” writes A.V. Club critic Erik Adams. “Oh, Hello is the type of show that can get a huge laugh just by painting a picture with words, like George’s description of a ‘1970s coffee’: ‘Watery and gray and a gun next to it on the table.'”

The animated adventure comedy The LEGO Batman Movie, a spin-off of “The LEGO Movie,” offers an irreverent, kid-friendly take on the dark knight as he learns to work well with his fellow superheroes (PG).

Available same day as select theaters nationwide are the action comedy Once Upon a Time in Venice with Bruce Willis as a California PI after the men who stole his dog (not rated) and sci-fi thriller The Recall with Wesley Snipes (R).

Julie Dash’s newly restored American indie landmark Daughters of the Dust (1991), set in the now-lost Gullah culture of the Georgia’s St. Helena Island at the turn of the 20th century, makes its streaming debut (not rated, with subtitles).

Streaming TV: Quantico: Season 2, the NBC thriller starring Bollywood superstar Priyanka Chopra caught up in a terrorist conspiracy at the FBI, is available months before its Season 3 premiere, and El Chapo: Season 1, about the drug kingpin, comes to Netflix from Univision (with subtitles).

Crying Freeman (1995), the live action adaptation of the hit anime, is an English language co-production with a French director (Christoph Gans) and an international cast (Mark Dacascos, Tcheky Karyo, Mako) shot in Vancouver (not rated).

Foreign affairs: Audrey Tautou is Therese (France, 2013) in Claude Miller’s adaptation of the novel by François Mauriac (not rated, with subtitles).

True stories: The Last Man on the Moon (2016) features interviews with astronaut Eugene Cernan, walked on the moon on the final Apollo mission (not rated).

The international thriller Transpecos (2016) stars Gabriel Luna and Clifton Collins Jr. as border agents caught up in murder and conspiracy at a checkpoint (not rated, with subtitles). (Amazon Prime and Hulu)

Streaming TV: Billy Campbell plays a police detective with a troubled past that threatens to derail his investigation in the Canadian crime drama Cardinal: Season 1.

The supernatural invasion thriller The Strain: Season 3 from filmmaker Guillermo Del Toro arrives as the fourth and final season begins on FX.

True stories: Free the Nipple (2014) chronicles a movement spearheaded by women to end the censorship of women’s breasts. Also newly arrived: forgotten female jazz and big band musicians profiled in The Girls in the Band (2011), the story of Miami’s eighties drug explosion in Cocaine Cowboys (2006), and the media coverage of the war in Iraq in Control Room (2004) (all not rated).

Ben Affleck is The Accountant, a math savant with the skills of a professional assassin in the thriller co-starring Anna Kendrick (R).

The documentary Becoming Cary Grant, which features rare footage and excerpts from his unpublished memoir, comes to Showtime after its debut at Cannes (not rated).