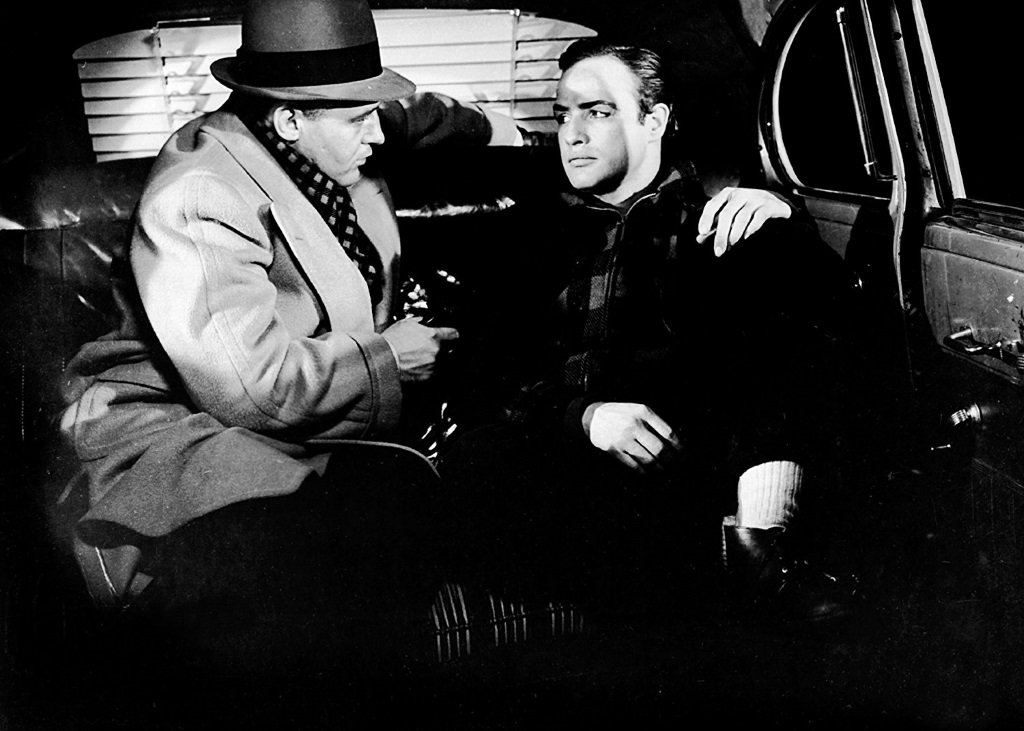 On the Waterfront (1954) –”I coulda been a contender. I coulda been somebody, instead of a bum, which is what I am.”

Marlon Brando won his first Academy Award as Terry Malloy, the former prize fighter turned longshoreman on the mob-dominated docks of New York. Directed by Elia Kazan and starring Karl Malden, Rod Steiger, and Eva Marie Saint, it was the most successful film to date that erupted out of the Actor’s Studio “method,” winning eight Academy Awards (including Best Picture, Best Director, and Best Supporting Actress for Saint).

But its political legacy has also polarized critics. Kazan used the story of a man who turns informer on the mob to justify naming names of former Communist party members in front of congress. The controversy sometimes clouds a beautifully-made film shot on location on the streets of New York, where the grit and poverty are turned into an evocative backdrop to the drama with Boris Kaufman’s striking, Oscar-winning photography and shadowy lighting.

Not rated, black and white.

Criterion Channel presents the film with supplements from the special edition disc, including commentary, featurettes, and interviews. (See below for details)

Leaves Criterion Channel at the end of January. Add to My List.

, iTunes, GooglePlay and/or other services. Availability may vary by service.
On the Waterfront (Criterion Collection) [Blu-ray]

On the Waterfront (Criterion Collection) [DVD]

Criterion Blu-ray and DVD special editions also include “Martin Scorsese and Kent Jones,” an 18-minute conversation about the film between the filmmaker and the film critic; the original 45-minute documentary “I’m Standin’ Over Here Now”; the 21-minute video essay “Leonard Bernstein’s Score” with Jon Burlingame; video interviews with actress Eva Marie Saint, supporting actor Thomas Hanley, and historian Thomas Hanley (discussing the culture and politics of the waterfront); and a brief featurette on the reasons behind the multiple presentations of the film in different aspect ratios. Accompanying the disc set is a booklet with a new essay by filmmaker and critic Michael Almereyda and archival articles by Elia Kazan (defending his testimony before the House Un-American Activities Committee), Malcolm Johnson (one of the 1948 newspaper articles on organized crime in the longshoremen unions that inspired the film), and Budd Schulberg.

Criterion’s releases are mastered from a 4K digital transfer of the original 35mm negative, for Blu-ray (two discs) and DVD (three discs), presented at 1.66:1 aspect ratio, with additional presentations of the restoration in two alternate aspect ratios: 1.85:1 widescreen and 1.33:1 Academy ratio. The presentation is nearly flawless, with deep, rich blacks, sharp focus, respect for the film’s texture (no noise reduction), and a clean image.