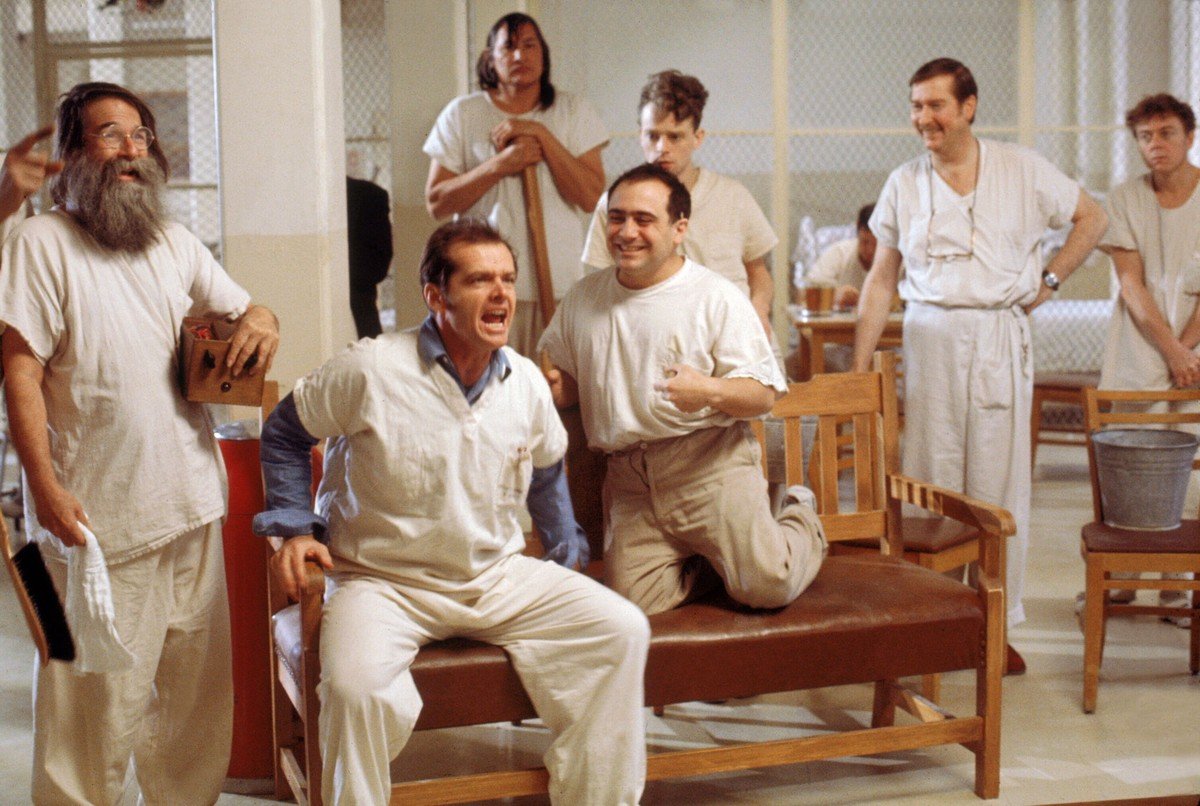 A rare screen adaptation of a beloved novel to maintain the emotional and dramatic power of the original while establishing its own distinctive approach to the story, One Flew Over the Cuckoo’s Nest (1975) is an underdog masterpiece.

Jack Nicholson stars as Randle P. McMurphy, a wild man of a petty crook who fakes insanity to avoid jail and lands in a mental hospital ward controlled with icy domination by Nurse Ratchet (Louise Fletcher). His antics make him something of a counter-culture rebel, not so much defying authority as deflating it, but in this ward he’s something of a misfit king leading the subjugated souls to moments of freedom against the rigid authority of their lives.

Ken Kesey’s original novel was a bestseller and a counterculture classic that had already been turned into a successful Broadway play. Michael Douglas produced the screen version with music impresario Saul Zaentz, and they brought in Czech émigré Milos Forman to direct. Forman brought a realist approach to the hallucinatory novel, offering a film more reflective of the post-Watergate seventies than the counterculture sixties, and Haskell Wexler’s cinematography gives the film a documentary vividness.

As played by Nicholson, McMurphy is less a sixties symbol of frontier individualism and counterculture freedom than a scruffy, disreputable everyman roused to rebellion by circumstances and temperament. Fletcher played the part of Ratched as a repressed character who genuinely believes she is helping her patients. The film centers on the collision and struggle between these two powerful personalities. Forman shot the film almost entirely on location at the Oregon State Hospital in Salem, Oregon—the very hospital where Kesey set the novel—with real patients and doctors participating as extras to add to the accuracy and the atmosphere of verisimilitude.

It became a box office smash (eventually earning $200 million on a budget less than $5 million) and was nominated for nine Academy Awards and won five. Jack Nicholson won his first Oscar (after four nominations) as McMurphy and Louise Fletcher accepted her Oscar with a moving acceptance speech that she gave simultaneously in sign language for her deaf parents. And it took home the gold for the screenplay adaptation by Lawrence Hauben and Bo Goldman, Milos Forman’s direction, and for Best Picture: the first film since It Happened One Night in 1934 to sweep the five major categories. It’s stature has grown ever since, becoming one of the great stories of defiance in the face of unchecked power, and one of the most powerful character dramas of its time.

For more information on the film, its production, and its legacy, see Sean Axmaker’s article at Turner Classic Movies.

, iTunes, GooglePlay and/or other services. Availability may vary by service.
One Flew Over the Cuckoo’s Nest [Blu-ray Book Packaging]

Warner released the film on DVD and Blu-ray special editions. “This is a movie about a society where I just lived 20 years of my life,” described director Forman in the accompanying 47-minute documentary “The Making of One Flew Over the Cuckoo’s Nest,” a 1997 documentary that features interviews with every major living creative participant but one (Mr. Nicholson is conspicuously absent) as it reaches back to the original stage production commissioned by Kirk Douglas (who created the role of Randle P. McMurphy on stage) and follows it back through the rocky road to film production. Also features commentary by director Milos Forman, producers Michael Douglas and Saul Zaentz and eight deleted scenes. The Blu-ray is also available in an edition with a small hardback booklet featuring production notes and stills.