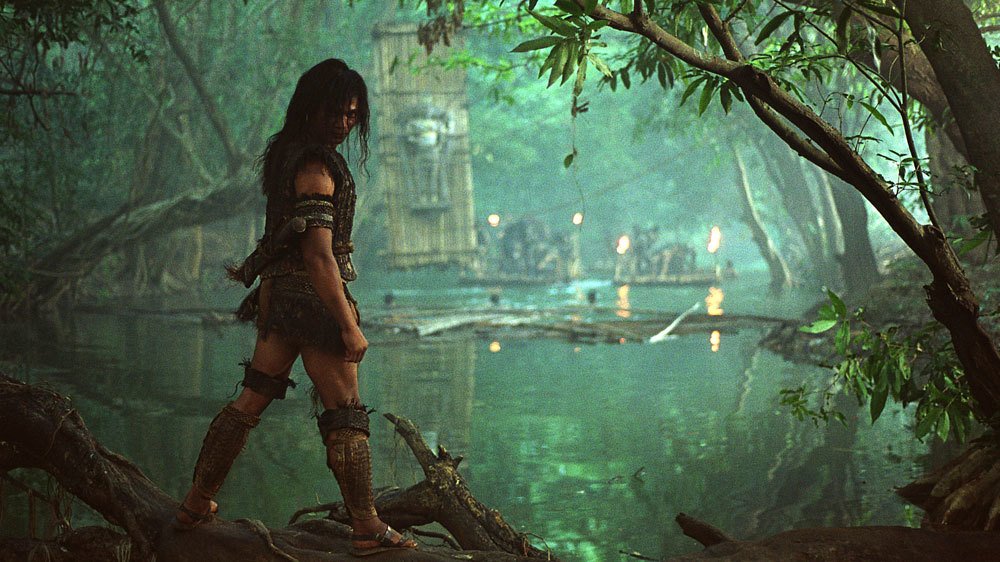 Ong-Bak 2: The Beginning (Thailand, 2008) is a prequel in name only to Ong-Bak (2003), sharing only the title and star Tony Jaa from the original international martial arts hit from Thailand.

Set some 500 years ago in 15th Century Thailand, this revenge thriller stirs up almost non-stop action with a swirl of flashbacks, a full complement of slow-motion and strobing skip-frame action, and Hollywood-style camerawork and rapid-fire editing. It owes more to Apocalypto than the original Ong-Bak and is slicker and more technically accomplished than any Thai action film I’ve seen, but it comes at the expense of the down-and-dirty filmmaking that made the first Ong Bak so impressive: you didn’t just see every stunt executed by Jaa in straight-on, unbroken shots, you saw them replayed a couple of times from other angles to show just how damnably impressive it really was.

This is a simple revenge story loaded up with far more exposition than necessary: young Tien survives the betrayal that leaves his father murdered, gets tossed into a crocodile pit by nasty child slavers and is adopted by Chernang, the King of the Outlaws (Sorapong Chatree) after he proves himself by dispatching the creature. After an energetic training montage, the kid grows up into the emotionally impenetrable Tony Jaa, shows off a greatest hits of old Jackie Chan moves and then goes on to take his revenge on the man who murdered his warrior father, one epic battle at a time. The minions keep coming, day and night, and he goes through a small army by the end, at one point helped by the elephant he befriended as a boy.

Jaa wrote the story, co-directed the film and directed the action scenes, so this is his baby and he fills it with impressive set pieces that show off his range of fighting styles (at one point he resorts to drunken fighting, for no good reason other than it looks cool) and action stunts (and even acrobatic dancing; see Tien, those lessons paid off after all) without demanding he do more than look haunted by his unresolved past. Jaa isn’t one for emoting, or for leavening any of the overly-serious gravity with some much-needed humor for that matter, and the lack of any dramatic center leaves the action, for all its bloody carnage and brutality, emotionally untethered: all spectacle and no character. The mix of hyper-ventilating style, scenes flowing into long flashbacks at the drop of a pensive look from Jaa and non-stop action set-piece hung on the minimal narrative creates something the verges on the abstract and the bizarre climax only encourages that unfixed sense. For all the adrenaline-pumping through the stunts, there’s nothing at stake here. Except maybe… reincarnation?

Ong-Bak 3: The Final Battle (Thailand, 2010), the third film in Tony Jaa’s trademark series, begins where the second ends and sends the beefy young martyr on a vision quest to rediscover his grace and then return to kick epic butt in a smackdown with an ancient supervillain and his army. If there is a signature to Jaa’s films (apart from his distinctive fight style) it is elephants and they are a big part of this film, from the stone creatures brought to life to shrug off a castle built on their haunches to a small army that sides with our hero in the final battle.

The rest is a mix of action spectacle, period detail, hero’s odyssey cliché and narrative incoherence, directed with a soberly serious, mannered grandiosity: almost as many slow motion shots of our pensive hero posing with the wind gently blowing his hair as there are slow motion fight clips.

Add to My Watchlist: Ong-Bak 2: The Beginning and Ong-Bak 3: The Final Battle

), iTunes, GooglePlay and/or other services. Availability may vary by service.
Ong Bak 2: The Beginning [Blu-ray]

The DVD and Blu-ray of Ong-Bak 2 both feature an alternate cut of the film runs about 10 minutes shorter and plays a little tighter but still lacks any emotional drive, plus three Thai-produced “Making of Featurettes” (with plenty of interviews with Jaa and the creative team), three “Behind the Scenes Featurettes” (no narration, just raw footage and music) and 25 minutes of additional cast and crew interviews. The “sneak peak” at Ong-Bak 3 is actually a teaser trailer and the HD-Net featurette is little more than a three-minute promotional piece, but it is in English.

Ong-Bak 3 is available in two-disc DVD and Blu-ray special editions with Thai-language interviews and featurettes and an American promotional short.