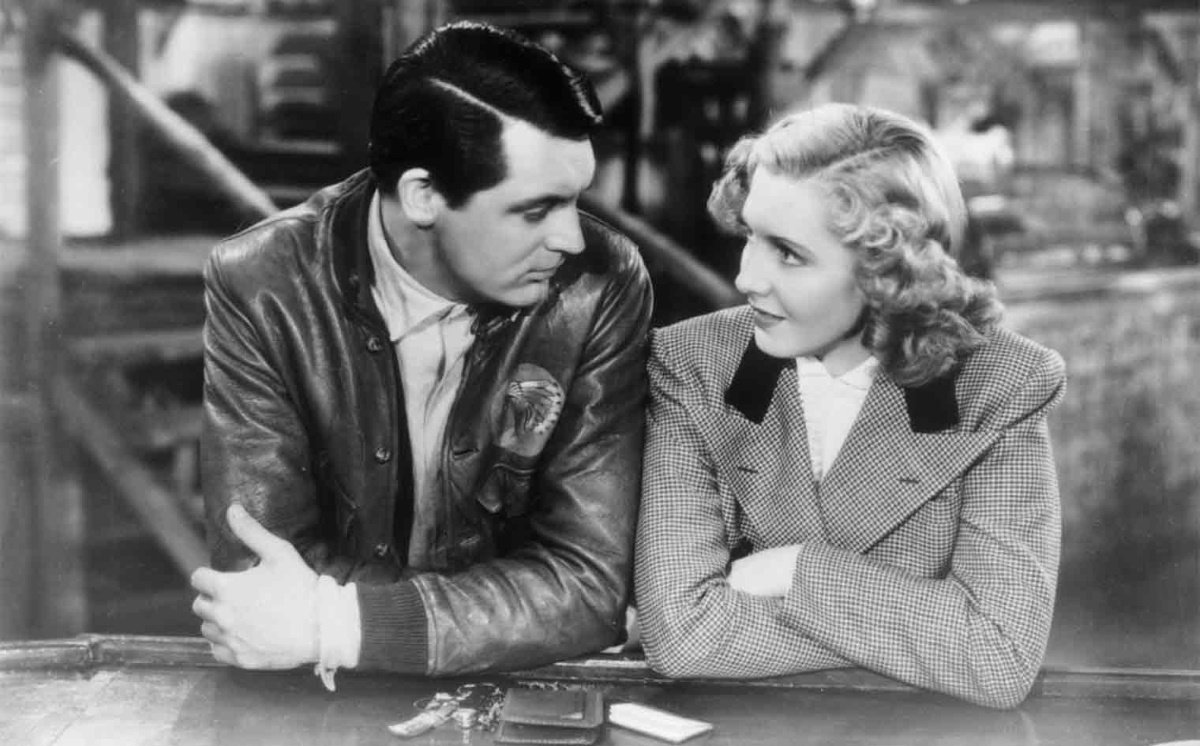 If you love movies, I mean really love the glory of Hollywood moviemaking and star power and the joys of wondrous stories, then you surely Only Angels Have Wings (1939), the quintessential Howard Hawks adventure of male bonding and tough love in a world where there may be no tomorrow. If you haven’t fallen for it yet, it may be that you simply have yet to discover it.

Cary Grant is Geoff Carter, the charismatic, uncompromising leader of a fledgling air mail service in a South American port town, a business run on rickety planes and the nerves of its pilots. He lives out of a bar, never lays in a supply of anything, and never sends a man on a job he wouldn’t do himself. Jean Arthur is Bonnie, the spunky American showgirl with a “specialty act” who clashes with Geoff. He’s all arrogance and lust. She’s outraged and appalled. Of course they are meant for each other, which is news to Geoff, who’s only interested in the moment and has no use for romantic commitment.

There’s something romantic about these men who love flying so much they take a job at the end of the world just to pit their skill against a treacherous mountain pass in a night fog. And there’s something inviting in the way these men banter and argue and spin tales between jobs yet are ready to spring into action at the first hint of a pilot in trouble. It’s Hawks’ idea of a romantic world, which frankly sidelines women who aren’t actively involved in the team effort, but it welcomes all who embrace the philosophy that professionalism is the greatest measure of character.

Thomas Mitchell is Geoff’s best friend, Richard Barthelmess a veteran flier with a bad reputation, and Rita Hayworth (drop-dead sexy in her first major role) is his glamorous wife. Who, of course, has history with our hero. Movies are built on such small world coincidences. The magic of Hawks is the way he turns contrivance into community and plot twists into tests of character.

It’s witty, it’s lively, it’s an adventure fantasy constructed entirely in Hollywood studios. Yet this Hollywood-constructed fantasy of an American outpost and makeshift airfield chopped out of the jungle makes a fabulous backdrop to a rarified world where life is lived minute to minute, men are good enough, and the highest compliment one can receive is “professional.” Welcome, professional!

It received Oscar nominations for Joseph Walker’s cinematography and for special effects, and was added to the National Film Registry in 2017.

, iTunes, GooglePlay, Fandango, Vudu and/or other services. Availability may vary by service.
Only Angels Have Wings (The Criterion Collection) [Blu-ray]

Only Angels Have Wings (The Criterion Collection) [DVD]

On DVD and Blu-ray from the TCM Vault Collection and Criterion Collection. Criterion’s edition is mastered from a 4K digital transfer from the original 35mm negative. You might think that such clarity would lay bare the seams of the Hollywood artifice but the opposite is true: the rich detail of the sets and settings are a sight to behold in the cleanest, clearest, sharpest presentation I have ever seen.

The Blu-ray and DVD editions both feature a new interview with film critic David Thomson, who offers a crash course introduction to the art and themes of Hawks (it runs about 17 minutes), the new 20-minute program “Howard Hawks and His Aviation Movies” with film scholars Craig Barron and Ben Burtt, and excerpts from Peter Bogdanovich’s 1972 interviews with Howard Hawks (audio only, about 19 minutes), plus the 1939 “Lux radio Theatre” adaptation of the film with stars Cary Grant, Jean Arthur, Rita Hayworth, Richard Barthelmess, and Thomas Mitchell all reprising their roles, and the trailer. The fold-out insert features an essay by Michael Sragow.