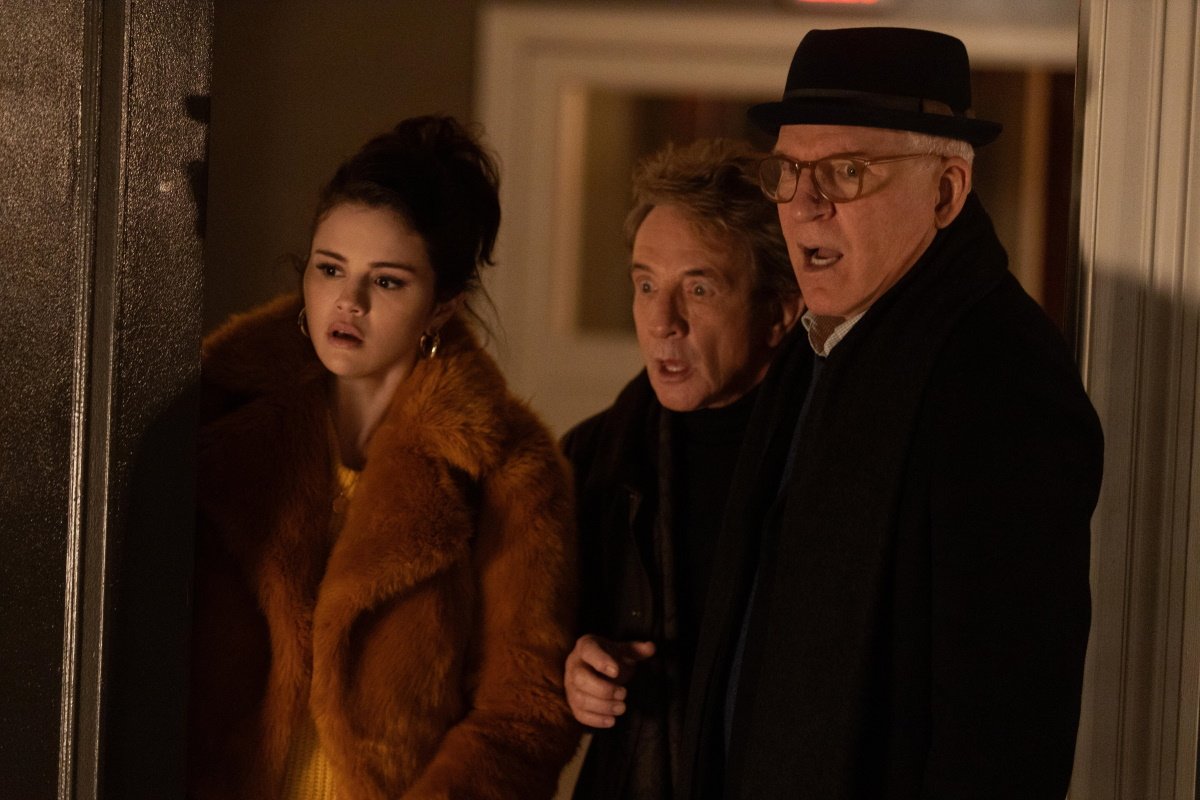 Steve Martin, Martin Short, and Selena Gomez star as strangers whose shared obsession with true crime podcasts brings them together after stumbling across a grisly death in their Upper West Side apartment building in “Only Murders in the Building: Season 1“ (not rated). The police call it suicide but these three folks are convinced it’s murder and they begin their own investigation… and, of course, their own podcast chronicle. Their chemistry carries the mystery but there’s also a melancholy undercurrent to the lonely characters. Steve Martin created the comic mystery series with John Hoffman, which costars Nathan Lane, Da’Vine Joy Randolph, and Amy Ryan. Three episodes available, new episodes on Tuesdays. (Hulu)

Michael Keaton stars in “Worth“ (2021, PG-13) as the attorney brought in to oversee the near-impossible task of determining compensation for the families who lost loved ones in the 9/11 attack on the World Trade Center and Stanley Tucci plays the community organizer who helps the sincere but socially awkward official connect with the people in the drama based on real-life events. (Netflix)

Among the documentaries commemorating the 20th anniversary of the September 11 attacks in 2001 debuting this week are “9/11: Inside the President’s War Room“ (2021, not rated), which explores the events through the eyes of President Bush and his closest advisors (Apple TV+);

“Undine“ (Germany, 2021, not rated, with subtitles), written and directed by Christian Petzold, reimagines the ancient myth of Undine as a drama of romance and betrayal in modern day Berlin. Paula Beer won the best actress award at Berlin Film Festival and European Film Awards for her performance. (Hulu)

Classic picks: if you are enjoying the musical revival on both big and small screens, check a pair of classics now on HBO Max, the nostalgic “Meet Me in St. Louis“ (1944) with Judy Garland and the breezy “On the Town“ (1949) with Gene Kelly and Frank Sinatra as singing sailors on shore leave in New York City. (HBO Max)

Victoria Justice stars in the romantic comedy “Afterlife of the Party“ (2021, TV-PG) as a party girl who returns from the dead.

The documentary “Final Account“ (2020, PG-13, with subtitles) presents filmmaker Luke Holland’s interviews with the last surviving “witnesses to the crimes of the Third Reich.”

Before winning the Oscar for “Parasite,” Bong Joon-ho made “The Host“ (2006, with subtitles), a monster movie with a socially-conscious dimension.

Available for one moth only are the first seasons of more than a dozen TV shows featured on other streaming services, including the horror anthology “Creepshow“ (2019, TV-MA), the Canadian crime drama “Republic of Doyle“ (2010, TV-14), the original version of the crime drama “The Killing“ (Denmark, 2007, TV-MA, with subtitles), and the original prime time animated sitcom “The Flintstones“ (1960, TV-G)

Episodes of the third season of the hit FX comedy “What We Do in the Shadows“ (TV-MA) stream on Fridays.

Paul Newman and Robert Redford are “Butch Cassidy and the Sundance Kid“ (1969, PG) in the jaunty western that won four Academy Awards.

Ethan Hawke stars as an ordinary man in a genetically-engineered future in the sleek science fiction drama “Gattaca“ (1997, PG-13).

“Harry Potter and the Sorcerer’s Stone“ (2001, PG) and the complete series of “Harry Potter” movies are now back on HBO Max for the foreseeable future.

“Happier than Ever: A Love Letter to Los Angeles“ (TV-14) presents Grammy-winner Billie Eilish in a concert special directed by Robert Rodriguez and featuring animated sequences.

The animated series “Dug Days: Season 1“ (TV-PG) continues the adventures of the talking dog from the Oscar-winning Pixar feature “Up“ (2009, PG). Both feature the voice of Ed Asner, who recently passed away.

“Tomorrowland“ (2015, PG) pits George Clooney and Britt Robertson against robots from the future and an impending apocalypse.

JoJo Siwa stars in the family-friendly “The J Team“ (2021, not rated) as a dancer who starts her own troupe. (Paramount+)

“Gigantes: Season 1“ (Spain, TV-MA, with subtitles), a crime drama set in the Madrid underworld, and the second season of the mystery series “The Bastards of Pizzofalcone“ (Italy, TV-14, with subtitles), novels by Maurizio de Giovanni, roll out new episodes on Tuesdays.

“Dead Mountain“ (Russia, not rated, with subtitles) is a limited series murder mystery based on declassified files about a real-life case in the Ural Mountains in 1959 Russia.

“Lovers of the Red Sky: Season 1“ (South Korea, not rated, with subtitles) is a romantic fantasy about the first female painter accepted in the Korean Royal Academy and a blind astrologer. New episodes on Mondays.

The “New York Stories” collection features over 80 features and shorts set and shot in New York City over the past 100 years, from Charlie Chaplin’s funny and touching “The Immigrant” (1917, silent with score) to Kenneth Lonergan’s powerful “Margaret” (2011, R) with Anna Paquin and Mark Ruffalo. Highlights include the romantic drama “The Clock” (1945) with Judy Garland, the docu-noir “The Naked City” (1948), Oscar-winning musical “West Side Story” (1961), and Martin Scorsese’s offbeat indie comedy “After Hours” (1985, R).