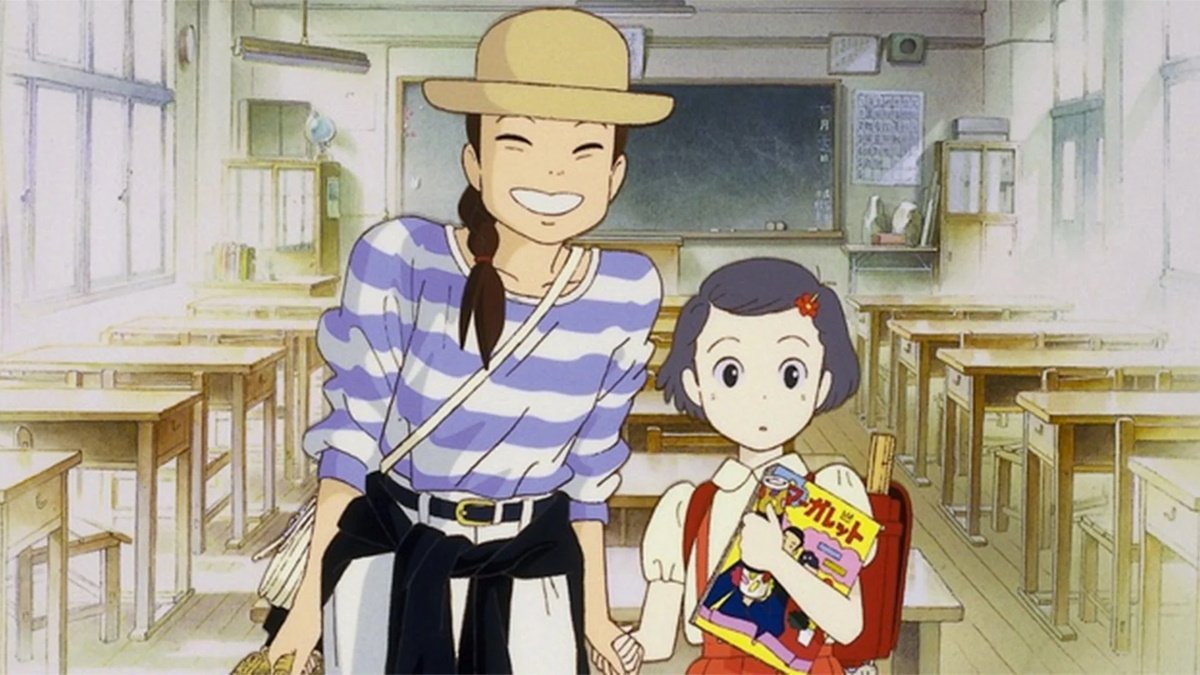 Only Yesterday (Japan, 1991) from Studio Ghibli and filmmaker Isao Takahata (Grave of the Fireflies and the Oscar-nominated The Tale of the Princess Kaguya) received its belated American premiere in 2016, just in time for its 25th anniversary.

Adapted from the manga by Hotaru Okamoto, this is not a fantasy film but something more like an animated memoir, a reflective memory film about 27-year-old Taeko who spends her summer in the country to visit her grown sister Yeako and pick safflowers on the farm of her brother-in-law’s family. The textures and sights send her mind rolling back to the fifth grade when, as the youngest of three daughters, she recalls her younger self as an adolescent with two teenage sisters who put on airs of being adult.

“I didn’t expect to bring my fifth-grade self along for the trip,” she muses in voice over, but her younger self (who is also echoed in a friendship with a young girl who looks up to the grown Taeko) offers some perspective on who she has become, and hasn’t become. Single and working an office job she has no passion for, working the fields gives Taeko a satisfaction her life is missing, and her friendship with a fellow fieldworker, Toshio, gives her sounding board to work out the sudden flood of dreams and memories. He may also offer the possibility of romance, though as family pushes the idea, she becomes (predictably) resistant to it.

Originally released in 1991 and set a decade earlier, with flashbacks reaching back to the 1960s, the film is both remarkably contemporary and beautifully timeless. Forget the absence of cell phones and references to The Beatles (as well as Japanese pop groups who modeled their sound on the Fab Four, cultural touchstones lost on us but resonant to the film’s original audience) and it could be, as the title suggests, only yesterday.

Unlike the films of fellow filmmaker Hayao Miyazaki, with whom Takahata founded Studio Ghibli, Only Yesterday meanders through its story. Takahata takes his time wandering through the experiences of the grown Taeko and the memories of her younger self (who periodically runs through her present day scenes). But it’s no time travel fantasy. Rather, these images remind us of how the past is a part of our present. There’s a serenity to images even in moments of anxiety and despair, and the young Taeko has her share of both. A struggling student and a headstrong girl out of step with family expectations, she “isn’t normal,” insists her mother. As we spend time with her, we find otherwise: she is absolutely normal. That is, she is unique and creative and obstinate and needy, a girl anxious to please her parents, follow her heart, and find herself while navigating the complicated culture of childhood in a family that seems to have forgotten that she’s still a child. The details are specific to her life but the thoughts and feelings and impulses reverberate across eras and cultures.

This is as unconventional an animated film you’ll find, an introspective, nuanced drama attuned to the most delicate moments of experience and memory and a complex narrative that appears simple due to the mastery of Takahata’s storytelling. It’s a gift to finally have this film available to American audiences.

The Blu-ray and DVD features both original Japanese and English dub soundtracks, the 1991 documentary “The Making of Only Yesterday,” and other featurettes. Exclusive to the Blu-ray is a feature-length presentation of the storyboards set to the soundtrack.