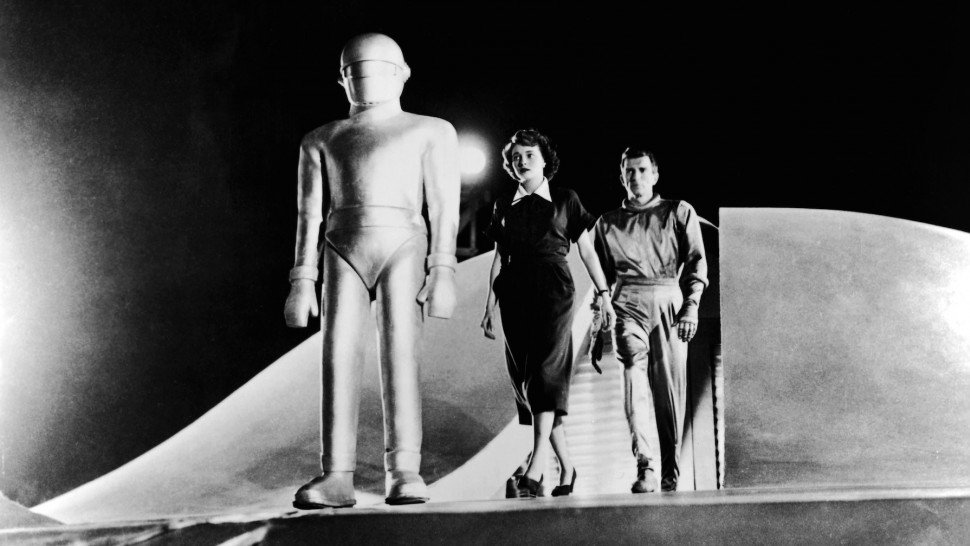 The original The Day the Earth Stood Still (1951) remains the most thoughtful of the first contact films. Michael Rennie makes a striking American film debut as Klaatu, the well-spoken stranger from outer space who lands his saucer in Washington D.C. to speak to the world’s leaders. They shoot first, of course, and Klaatu escapes his imprisonment to explore the human incognito, where he befriends single mother Patricia Neal and her innocent son.

Sam Jaffe goes Einstein as the peace-loving scientist Klaatu reaches out to and Hugh Marlowe is Neal’s boyfriend, a man more concerned with advancement and politics than peace on Earth.

It’s as much Christ parable as science fiction film (a messenger from the heavens on a mission of peace roams among us and is killed by the people of Earth, rises from the dead for a last sermon, and returns to the heavens), yet its message is delivered less like a sermon than a threat. It’s handsomely directed by Robert Wise, who places the fantastic elements in a scrupulously realistic Washington, D.C., setting. He gives the film dramatic weight and narrative elegance, as well as the most enigmatic movie robot ever. “Klaatu barada nikto!”

and other services. Availability may vary by service.
The Day the Earth Stood Still [DVD]

Director Robert Wise discusses the film on a commentary track with Nicolas Meyer, a fellow director who makes an intelligent interviewer and moderator and a sharp commentator. The DVD also features the 80 minute documentary “Making the Earth Stand Still,” a lolling, laid back tour through the stories of director Robert Wise, producer Julian Blaustein, and actors Patricia Neal and Billy Gray (among others) concluded with a tour of posters, collectibles, and the surviving original Gort statue, as well as a Fox Movietone Newsreel from 1951, 5 still galleries, the complete shooting script, and the trailer.