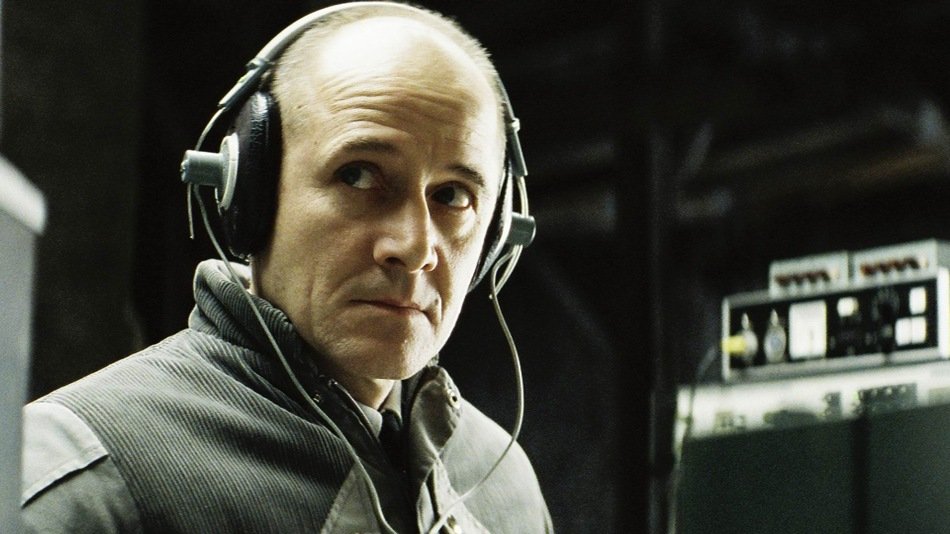 Is there anything more dangerous than a true believer who approaches his mission with unshakable certainty and unwavering dogma?

Florian Henckel von Donnersmarck’s The Lives of Others (Germany, 2006) follows the odyssey of a staunchly patriotic Stasi agent (a brilliant Ulrich Mühe), the secret police of the GDR (Communist East Germany), and his surveillance of Georg Dreyman (Sebastian Koch), a beloved socialist playwright with a spotless record. Mühe’s single-minded Captain Gerd Wiesler sees conspiracy and guilt everywhere and is relentless in his pursuit and interrogation of the “enemies of socialism,” but his ideology and faith is shaken after seeing the world through the eyes of his target and watching the arrogant abuse of power wielded by his superiors.

Von Donnersmarck resorts to dramatic hammerblows to illustrate Wiesler’s metamorphosis—tears stream down his face as Dreyman plays “Sonata for a Good Man” on piano—but otherwise plays a distant observer with an eye for telling detail. And Mühe’s performance is brilliant, communicating more turmoil and pain with the droop of a lip and a flicker of the eye across an otherwise intently passive face than all the emotional storms of the cast.

It all plays out in 1984, a year with both symbolic resonance (the culture of government intimidation and social coercion is a real-life echo of George Orwell’s dystopian fiction) and historical significance: It was the darkest moment of East Germany’s political repression before the dawn of the fall of the Berlin wall. And The Lives of Others is dark, but burning beneath the scathing political exposé of the GDR’s despotic paranoia and the personal tragedy of the drama is a bracing story of idealism, disillusionment, and defiance.

Though the title suggests that the film is about surveillance subjects Dreyman and his girlfriend (Martina Gedeck), a tormented actress blackmailed into an affair by a corrupt minister, The Lives of Others belongs to Wiesler, the good soldier who finds his own soul only after seeing his world through the lives of others.

It won the 2006 Oscar for Best Foreign Language Film and won big at the German Film Awards and the European Film Awards, among many others.

Rated R, in German with subtitles

, iTunes, GooglePlay, Fandango, Vudu and/or other services. Availability may vary by service.
The Lives of Others [Blu-ray]

The Lives of Others [DVD]

On Blu-ray and DVD from Sony Pictures Home Entertainment. German writer/director Florian Henckel von Donnersmarck speaks fluent English (better than some of his American counterparts) and provides an articulate commentary track that celebrates his unabasned appreciation of actors (“I think acting is the greatest art of all because it’s such a direct art,” he gushes. “You just have yourself, your body and your soul, and that’s all you can use. It’s the most direct and complete art form.”) and explains the social and historical details that American audiences are unlikely to notice or understand. He also discusses the film in a more focused 25-minute interview (essential if only for the devastating real life story of star Ulrich Mühe), also in English, and in the German-language featurette “Making of The Lives of Others,” along with the actors and other members of the production. Also features seven deleted/extended scenes with optional commentary (in English).