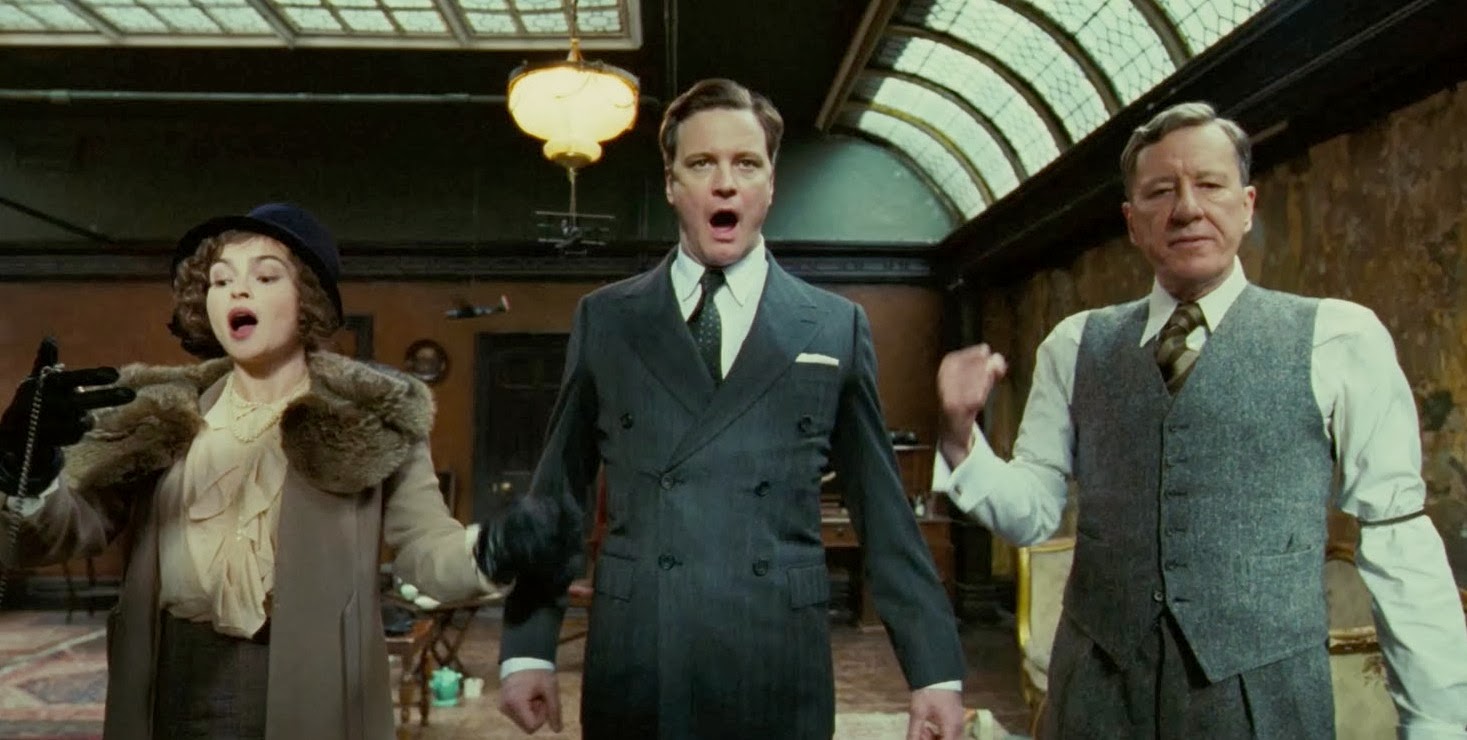 Whether or not you agree that The King’s Speech (2010) was indeed the Best Picture by the Best Director (Tom Hooper) of 2010, it was certainly the feel-good film of 2010 with portfolio. Colin Firth (who well earned his Oscar for Best Actor) stars as Duke of York (Bertie to his friends) and the man who would be King George VI and inveterate over-actor Geoffrey Rush delivers a genially understated turn as Lionel Logue, the real-life Australian whose unconventional therapies helped the stammering royal overcome his impediment.

It’s a triumph over adversity set against the majesty of royalty and the gravity of historical seriousness (the coming of World War II) and a veddy British friendship between prince and pauper, so to speak. The slow development of trust and friendship between the king and the speech therapist is matched by the quietly observed affection between the Prince and his wife Elizabeth (Helena Bonham Carter), and his adoring attention to his two girls (one of them destined to be Queen Elizabeth II). It’s done with good taste, crisp restraint, self-effacing humor and, of course, the modesty we expect from British cinema. Stiff upper lip and all that, with just a touch of sentiment.

It was re-edited to PG-13 for rerelease in theaters but this original version, rated R for language, is the one to see. “You don’t stammer when you swear” kind of loses its force when, you know, Firth doesn’t swear in his frustrated schoolboy way. The language is limited to a couple of scenes and the words pour out as a harmless but palpable expression of frustration and a sign of the vulnerability and humanity of his royal highness.

It won four Academy Awards in all, including best director Tom Hooper and screenplay for David Seidler, out of 12 nominations plus seven BAFTAs, three European Film Awards, and a Film Independent Spirit Award, among many others.

, iTunes, GooglePlay and/or other services. Availability may vary by service.
The King’s Speech [Blu-ray]

The DVD and Blu-ray from Anchor Bay feature commentary by director Tom Hooper, whose measured, restrained stream of production stories and historical details is modest, relaxed and perfectly in tune with the tone of the film. Not necessarily compelling but certainly interesting to anyone who wants to know more about the film, the filmmakers and the real-life inspirations, and Hooper does enjoy sharing the backstories of some of the film’s more interesting details, like that fabulous wall in Logue’s office: “a piece of found art” discovered while location scouting and used untouched in the film. “That’s a real wall but it somehow creates the feeling of a psychological space for Lionel and Bertie to inhabit. It’s almost a surrealist space…”

“The Making of The King’s Speech: The Inspirational Story of an Unlikely Friendship” is a handsome and conventional 23-minute production that covers all the bases: the true story, the historical record, the friendship (“Geoffrey and I called it a bromance,” smiles Colin Firth) and the drama of triumph, with the actors and filmmakers chiming in with the usual praise for their collaborators. There’s also a 22-minute audience Q&A with Colin Firth, Helena Bonham Carter, Claire Bloom, Guy Pearce and director Tom Hooper filmed after a screening in Los Angeles, two “Speeches From the Real King George VI” (an audio-only presentation of the September 3, 1939 radio speech that is the film’s climax and a post-war speech film on newsreel) and a 10-minute interview with Mark Logue, the grandson of Lionel Logue, talking about his grandfather and discovering the journal that Lionel kept while working with the King.