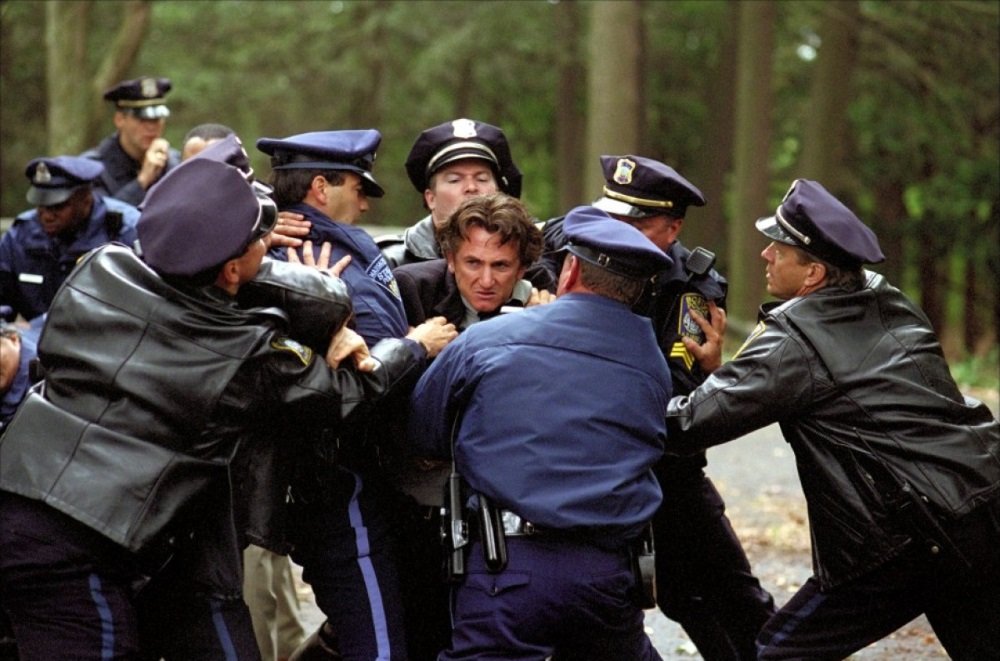 Mystic River (2003) – Three adolescent boys write their names in the wet cement of a newly poured sidewalk patch in their Boston neighborhood, but the last boy is interrupted, his name unfinished when he’s taken away in a car The two men purport to be cops but are child molesters who torture him for days.

Decades later, the boys have grown apart and grown up to become Sean Penn, Tim Robbins, and Kevin Bacon. The brutal murder of Penn’s daughter brings them together again: Bacon is the investigating detective and Robbins, a hunched, haunted man looking every inch the adolescent in an adult’s body trying to hold back the darkness by sheer will, becomes the prime suspect. Like his name in the cement, he remains stuck, unfinished, never to get beyond that nightmare.

Clint Eastwood’s film of Dennis Lehane’s acclaimed novel (scripted by Brian Helgeland) is a dark, vivid tale of family, community, loyalty, and justice on the streets. As a craftsman, Eastwood meets the tight, interlaced structure of Helgeland’s script with a driving pace that never pushes the rhythm of the individual scenes, yet drives the film as if it’s racing out of the control of all the characters. But it’s his recognition of the darkness in the hearts of the characters, the way their lives never escape their past, and what it takes to live with it all, that gives the film its resonance.

There is nothing romantic about the law of the streets, and its unforgiving nature has a finality that can’t be undone. Eastwood has an understanding of what it takes to live with yourself, not so much a sympathy as an appreciation. Eastwood directed actors Sean Penn and Tim Robbins to Academy Awards for their performances, and draws equally fine performances from Marcia Gay Harden and Laura Linney. Also stars Laurence Fishburne.

, iTunes, GooglePlay and/or other services. Availability may vary by service.
Mystic River [Blu-ray]