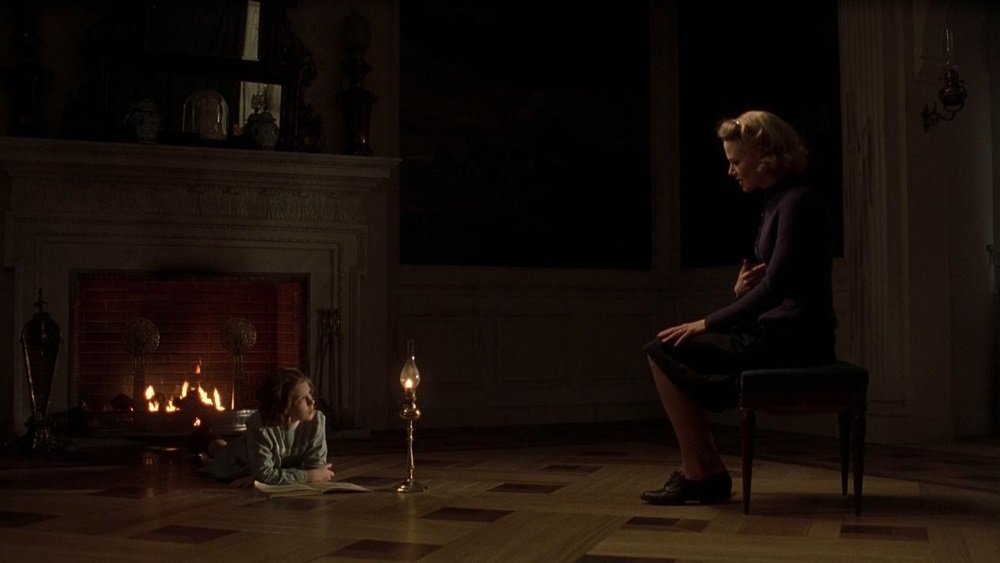 While I’ve not necessarily been a fan of the new flood of found footage-style horror movies, I do appreciate the return to a different approach to scaring audiences in the dark: films about the creepy, the unnerving, the inexplicable, and the unseen. It beats watching another director try to come up with yet another unique twist on the splattery death or put the most sadistic violence they can imagine onscreen. What they lack is the kind of art and artistry that can make a thriller both beautiful and horrible.

The Others (2001) is a handsome, elegant film that favors mystery and shadow and the hushed fear of what’s behind that locked door over violent spectacle. This inspired spin on Henry James’ Turn of the Screw, set in an isolated Irish manor house in the closing days of World War II, is a spooky little gothic ghost story shrouded in the darkness of a perpetually shadowy house enveloped in a seemingly eternal fog.

Nicole Kidman hides with her sunlight-averse kids in a gloomy mansion haunted by something truly frightening. Something is not right, but is it Kidman’s pale, paranoid mother teetering on the edge of hysteria, the new servants who whisper schemes when the mistress is away, or the “others” that only the children seem able to see, but whose presence soon has doors opening, curtains falling, and furniture moving with eerie regularity.

Kidman’s fragile performance, with her terrified eyes and barely controlled voice catching in her throat, is perfectly modulated. It’s a shiver inducing ghost story that plays mood over shocks, and one of the most interesting portraits denial and acceptance you’ll find in the movies.

It’s directed by Spanish stylist Alejandro Amenabar (who followed it with the Oscar-winning The Sea Inside with Javier Bardem) and features Fionnula Flanagan and Christopher Eccleston. The PG-13 rating is for scariness, not anything explicit.

O DVD and Blu-ray and on SVOD through Amazon Video

, iTunes, GooglePlay and/or other services. Availability may vary by service.
The Others [Blu-ray]

The special edition DVD and Blu-ray releases includes four featurettes. The 22-minute “A Look Inside The Others” is a basic overview that seems as transfixed with Nicole Kidman’s eyes as director Alejandro Amenabar claims he is. “Visual Effects Piece” is a wordless 4 ½ minute montage of key effects shots sketched out in a succinct split screen effect that doesn’t so much explain the process as display the elements and then bring them all together in the finished shot. It’s a nice way to show the work behind the magic to non-effects buffs. Also includes the 9-minute case study “Zeroderma Pigmentosum: What Is It? The Story Of A Family Dealing With The Disease Portrayed In The Others” and “An Intimate Look At Director Alejandro Amenabar,” which is not really a portrait of the artist but a series of behind-the-scenes shots showing the director at work with his actors and crew, as well as a stills gallery and the trailer.