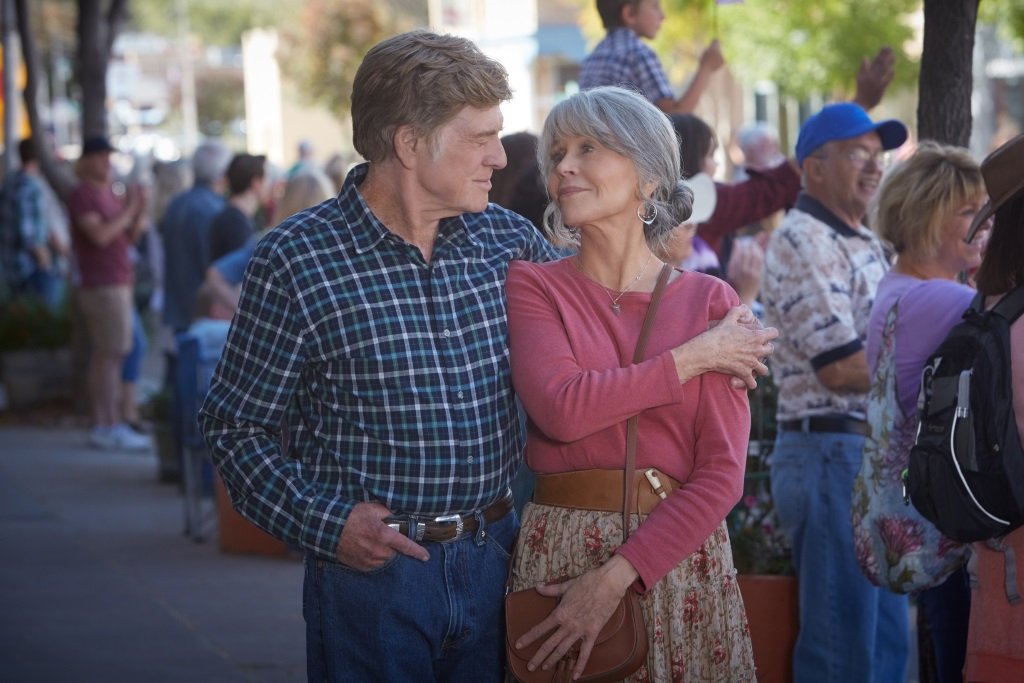 Jane Fonda and Robert Redford reunite in Our Souls at Night (2017), which comes to Netflix direct from the Venice Film Festival. Fonda is widow Addie and Redford widower Louis, lonely souls and longtime neighbors who turn to one another for company.

“As gentle as a moth’s wing, as soft and sweet as the flesh of a marshmallow, Our Souls at Night chronicles the blossoming of a December-December romance,” writes New York Times critic A.O. Scott. “[T]he stars have humanity to spare, and very little left to prove. With her careful diction and a bearing that conveys starchiness and sensuality in perfect, improbable balance, Ms. Fonda turns middle-class maturity into a bewitching form of charisma…. [Redford] is one of the great minimalists of American cinema, an actor who can dazzle you by opening the tiniest window onto a character’s inner life.”

Netflix celebrates with their three earlier collaborations: thriller The Chase (1966, not rated) with Marlon Brando, Neil Simon comedy Barefoot in the Park (1967, G), and modern western The Electric Horseman (1979, PG).

Carla Gugino stars in Gerald’s Game (2017, not rated), adapted from the Stephen King thriller and directed by horror veteran Mike Flanagan. “He has made just about the best version of “Gerald’s Game” that could result from not majorly overhauling the book, and delivered a film, premiering today on Netflix, that stands as the best King adaptation of the year so far,” writes Brian Tallerico (not a fan of the novel) for RogerEbert.com. “[He]e knows that less is more, never resorting to the techniques that a lot of filmmakers would have used to make up for the lack of story. ” Bruce Greenwood co-stars. It debuts directly on Netflix.

Transformers: The Last Knight (2017, PG-13), the sixth film in the action franchise of giant robot wars, adds a little gravitas to the cast: Anthony Hopkins joins Mark Wahlberg and Josh Duhamel. And of course a platoon of giant mechanical monsters that fold themselves like origami. Also on DVD and Blu-ray and at Redbox.

The Bad Batch (2017, R), the second feature from indie filmmaker Ana Lily Amirpour, is a dystopian horror film about cannibals in the Texas wastelands. Jason Momoa and Keanu Reeves co-star.

Álex de la Iglesia directs the Tarantino-esque thriller The Bar (2017, not rated, with subtitles) from Spain.

True stories: Elián (2017) is Elián González, who in 1995 was a 5-year-old Cuban boy in Florida at the center of a political struggle between the U.S. and Cuba.

Streaming TV flashback: Hulu now has the complete runs of the original Full House and other ABC family sitcoms of the eighties and nineties, including Home Improvement with Tim Allen, Perfect Strangers with Bronson Pinchot and Mark Linn-Baker and Family Matters with Jaleel White as Urkel.

Jesse Eisenberg meets his doppelganger in The Double (2013, R), a dark drama inspired by the Dostoyevsky novella.

Arriving Saturday night is the comedy Why Him? (2016, R) with James Franco and Bryan Cranston.

FilmStruck celebrates the work of pioneering independent filmmaker Shirley Clarke with a collection of recent restorations, including her innovative drama The Connection (1962), landmark documentary Portrait of Jason (1967), and Oscar-nominated short Skyscraper (1958).

Debuting this week on The Criterion Channel are Lucrecia Martel’s drama The Headless Woman (2008) from Argentina and the warm Japanese character comedy Mr. Thank You (1936) from director Hiroshi Shimizu.