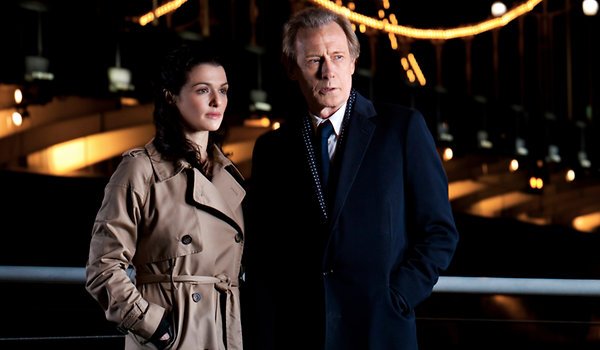 Bill Nighy has been one of my favorite actors in the world since I caught his cheeky turn as a geriatric rock star on a Christmas tune comeback in Love Actually and a crusty editor with a sardonic streak in the original British State of Play in 2003. He has been the best part of a lot of films in the decade since, and he defines the moral benchmark of David Hare’s Johnny Worricker Trilogy, a trio of made-for-TV features starring Nighy as career MI-5 intelligence analyst Johnny Worricker. Page Eight (2011), Turks and Caicos (2014), and Salting the Battlefield (2014) are now available for Amazon Prime members.

Hare, a British playwright and Oscar-nominated screenwriter (The Hours and The Reader), enters John Le Carre territory by way of David Mamet, the world of intelligence agents as civil servants in a jungle of bureaucratic gamesmanship. It’s not the spy game in Page Eight, it’s a matter of accountability, but information is power and Worricker is handed some pretty combustible intelligence by his boss and best friend (Michael Gambon), a sort of parting gift from a man who knows he’s not long for the service.

It’s not the mystery—which has something to do with “the special relationship” and the disadvantages on the British side of it — that matters, it’s the characters and the gamesmanship. In place of Le Carre’s sprawling networks of alliances and betrayals and long histories of double agent dealing, Hare gives is a miniature, stripped down and scripted with underplayed precision. Bill Nighy, a master of dry wit and the uncanny ability to see every situation with a hint of bemusement, plays Johnny as the very model of “mild mannered,” but it is a manner. He’s smart, crafty and naturally suspicious, and the combination has cost him a couple of marriages and very nearly his estranged daughter (Felicity Jones).

Rachel Weisz co-stars as his attractive next door neighbor (whose sudden interest in him raises flags of suspicion), Judy Davis his very competitive colleague and Ralph Fiennes  the Prime Minister, plus Saskia Reeves, Ewen Bremner and Marthe Keller. Quite a lot of stature here and they bring the understated (and somewhat glib) plot to life.

Three years later Hare returned with Turks and Caicos, part two of the Worricker chronicles after he turned whistleblower and left Britain after the fall-out from his revelations of combustible intelligence. It’s named for the Turks and Caicos Islands, a British protectorate and tax haven in the Caribbean where Johnny lives in exile. When he’s recognized by a CIA agent (Christopher Walken), chasing money skimmed from the government by American mobsters, he gets blackmailed into helping out with the case. In return, the CIA won’t rat him out to the British government. Maybe.

The tropical setting and the shift in focus from Page Eight (from government secrets and bureaucratic gamesmanship to the intersection of international crime and political secrets) makes this much more engaging than the first installment, which was more of a chamber drama of a spy film. But there’s also much more going on here between the Brits, the Yanks, and the local population, people whose lives Johnny engages with while every other western tourist ignores, and there is plenty of British skullduggery back home that gets tangled up in this case. Still, it’s the cast that really makes this work, from the unassuming warmth and dry wit of Nighy, who makes it look effortless as he sizes up the situation and plots his moves while everyone else is negotiating, to Christopher Walken, Winona Ryder (as a mob accountant with a tough backstory), Helena Bonham Carter (as Johnny’s ex-wife and future co-conspirator Margot), and Ralph Fiennes.

The third film in the trilogy, Salting the Battlefield, is neither as compelling nor clever as the first two, but it is kind of fun to see Nighy play the aging master agent beating MI-5 in a game of chess played over Western Europe.

If you enjoy the more morally tangled of the British TV spy dramas and murder mysteries, I think you’ll like these.

Amazon is now offering Salting the Battlefield as a Prime movie. Not the best of the Trilogy but well worth watching.

Where can I see these? Netflix and Hulu never have anything I want to see.
“Turks and Caicos” was amazing and I’d love to see it again.