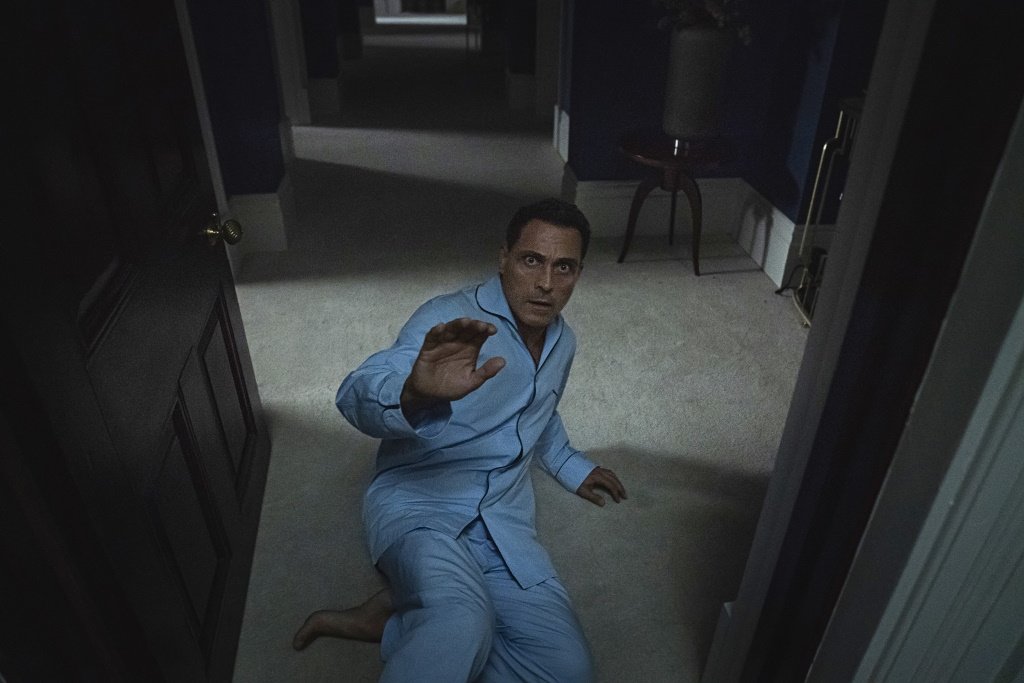 Rufus Sewell plays a successful businessman and reckless womanizer whose lovers start to turn up dead in “The Pale Horse” (2020, TV-14), a two-part adaptation of the Agatha Christie novel. Set in 1960s London, it’s a murder mystery with a twist of pagan ritual and supernatural suggestions. Kaya Scodelario, Rita Tushingham, and Sean Pertwee. Originally shown on British TV, it debuts stateside on Amazon Prime Video.

“Lost Girls” (2020, R) dramatizes the real-life story of a single mother (Amy Ryan) who takes on the investigation of a serial killer who murdered over a dozen women on Long Island, including her eldest daughter. Thomasin McKenzie, Oona Laurence, and Gabriel Byrne costar. It’s the first dramatic feature by Oscar-nominated documentary filmmaker Liz Garbus and it comes to Netflix direct from the Sundance Film Festival.

Staying with the true crime theme, the four-part documentary “The Most Dangerous Animal of All“ (2020) investigates the claims of Gary Stewart, who believes that the father who abandoned him was the Zodiac Killer. All four episodes streaming on FX on Hulu.

Netflix offers its second interactive program with the kid-oriented “Carmen Sandiego: To Steal or Not to Steal” (2020, not rated), an animated adventure that gives viewers the opportunity to choose the character’s decisions.

Adam Sandler gives one his finest performances as a New York jeweler and gambling addict in “Uncut Gems” (2019, R), an indie drama and character piece from the Safdie Bros. driven by adrenaline and nervous energy. Though overlooked for Oscar nominations, it won acclaim for Sandler’s performance and numerous awards from critics groups. Idina Menzel, Eric Bogosian, The Weeknd, and NBA center Kevin Garnett costar. On Cable On Demand and VOD, also on DVD and at Redbox.

Charlize Theron plays Megyn Kelly and Nicole Kidman is Gretchen Carlson in “Bombshell” (2019, R), the story of the toxic atmosphere of Fox News and the women who spoke out about the predatory behavior of Roger Ailes. Margot Robbie and John Lithgow costar in the film that won an Oscar for the impressive make-up that transformed Theron in Kelly and Lithgow into Ailes. Also new:

The second season of the hit series “Kingdom” (South Korea, TV-MA, with subtitles), a gripping mix of costume drama, historical epic, and zombie thriller, finally lets audiences breath again after the cliffhanger end of season one.

Emile Hirsch and Bruce Dern star in “Freaks” (2018, R), yet another indie twist on the superhero drama.

Streaming TV: “Beastars: Season 1” (Japan, not rated) plays like a more adult version of “Zootopia” with a murder in a high school of anthropomorphic animals

True stories: “Dirty Money: Season 2” continues to dig into the corruption and malfeasance of modern financial giants, including Jared Kushner.

James Caan plays an American who moves to Nazareth to raise pigs in “Holy Lands” (2019, not rated).

Six teens are trapped in the middle of a lake by a monstrous creature in the indie horror “Beneath” (2013, not rated).

A group of teenage revolutionary soldiers are left with an American prisoner (Julianne Nicholson) in “Monos” (Columbia, 2019, not rated, with subtitles), a kind of “Lord of the Flies” set in the mountains of Latin America. It was Colombia’s entry to the Academy Awards and a Sundance Film Festival winner.

Animation: a superpowered fireman deals with supernatural conflagrations in “Fire Force: Season 1” (Japan, TV-14), which initially played on the U.S. on Adult Swim.

Kid stuff: “Monchhichi: Season 1A” (France, TV-G) is an animated fantasy for young kids about the beings that create pleasant dreams.

Great music sustains “Yesterday” (2019, PG-13), a romantic comedy about a failed singer-songwriter (Himesh Patel) who wakes up in a world where only he remembers The Beatles and he performs their songs as his own. Lily James and Ed Sheeran costar, Danny Boyle directs from an original script by England’s romcom king Richard Curtis (“Love Actually”).

True stories: “Women of Troy” (2020, not rated) profiles the impact of the USC Trojans and their coach Cheryl Miller in the 1980s on the rise women’s basketball.

“Stargirl” (2020, PG), based on the young adult novel by Jerry Spinelli, is a ukulele-playing high school student (“America’s Got Talent” winner Grace VanderWaal in her feature debut) who transforms the life of a shy Arizona teenage boy. This gentle comic drama for teens and tweens is not to be confused with the upcoming CW superhero series of the same name.

Christopher Eccleston and Marsha Thomason are former cops who offer their guest cottage as a “Safe House” (2015, TV-MA) in the first season of the British crime thriller, now streaming on Sundance Now.

With the recent death of the great Max Von Sydow, Criterion Channel has put together a tribute with fifteen features “Starring Max von Sydow,” from Bergman classics such as “The Seventh Seal” (Sweden, 1957, with subtitles) and “The Magician” (Sweden, 1958, with subtitles) to “Until the End of the World” (1991)