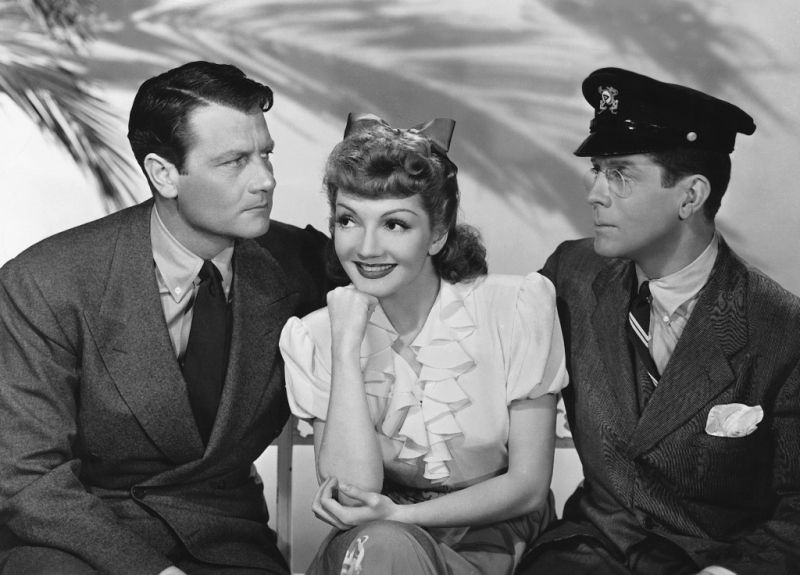 Leave it to Preston Sturges to create the funniest, sexiest, and most grown-up romantic comedy of his day with The Palm Beach Story (1942).

Claudette Colbert has never been more desirable as Gerry Jeffers, the flirtatious pragmatist with a clear-eyed take on the realities of men, women, and sex, and Sturges turns Joel McCrea’s All-American stiffness into comic perfection as her husband, the aspiring inventor Tom, a would-be Horatio Alger with a sense of pride and honor at odds with Colbert’s willingness to leverage her sex appeal. She’s not mercenary exactly, merely more socially sophisticated, and without the usual homemaking skills of the traditional housewife, those are tools she is more than willing to use.

They are opposites in everything from attitude to onscreen energy to body language. Colbert moves like a dancer and even her dialogue seems to dance through the film while the stocky, blocky McCrea is slow-moving, deliberately speaking bedrock, a foundation of hard-working focus and unbending values. They shouldn’t work but when his hands work the stubborn zipper on the back of her dress, they temperature rises noticeably.

The Palm Beach Story is a variation on the classic comedy of remarriage, a theme that runs through such films as The Awful Truth and His Girl Friday. Not that this couple divorces, but that’s Gerry’s plan, convinced that he’s better off without her expensive tastes, and she runs off with little more than the clothes on her back and almost literally falls into the lap of an idle rich oddball (a brilliantly underplayed comic turn by Rudy Vallee) and his cheerfully man-hopping sister (a sparkling Mary Astor). Meanwhile, Tom runs after her and gets introduced to Palm Beach society as her brother, Gerry’s plan to leverage the situation to finance his future as well as hers. She’s nothing if not thoughtful.

The Hollywood romantic comedy does not get any better than this classic from the height of Sturges’ astounding run of films in the first half of the 1940s. He was one of the wittiest writers of the era, a master of dialogue that defined its characters while bouncing punchlines like a tennis volley, and a lover of slapstick comedy. That mix of high and low, of snappy witty banter and vaudeville pratfalls, gives his comedies a decidedly American spark. Other Preston Sturges films may be funnier or cleverer or have a sharper satirical edge, but none are as romantic or as sexy.

And no other Sturges film has such a magical way of rolling through such wild yet delightful contrivances to push the characters along, like the Wienie King (Robert Dudley, an elderly rich eccentric with a romantic streak and a hearing problem), and the Ale and Quail Club, who adopt Gerry as a mascot until their intoxicated antics explode in slapstick chaos. Colbert leverages sex appeal with such matter-of-fact savvy that it hardly feels like scheming; she has her own sense of ethics and plays everything square. Yet even in a screwball world of eccentric millionaires and mistaken identities, it’s the familiar intimacy of an ‘old married couple’ that generates the most heat.

, iTunes, Vudu, and other services. Availability may vary by service.
The Palm Beach Story [Blu-ray]

The Criterion release is a lovely disc, mastered in 4k from a nitrate fine-grain print and a safety duplicate negative, and digitally cleaned up to look nearly flawless. It features a video interview with writer and film historian James Harvey about director Preston Sturges and a somewhat off-the-cuff appreciation of Sturges’ comedy by actor and comedian Bill Hader (who reads from the screenplay), plus the 1942 World War II propaganda short Safeguarding Military Information written by Sturges and featuring Eddie Bracken (star of two later Sturges classics), the “Screen Guild Theater” radio adaptation of the film with Colbert, Vallee, and Randolph Scott in the McCrea role, and a leaflet with an essay by film critic Stephanie Zacharek.