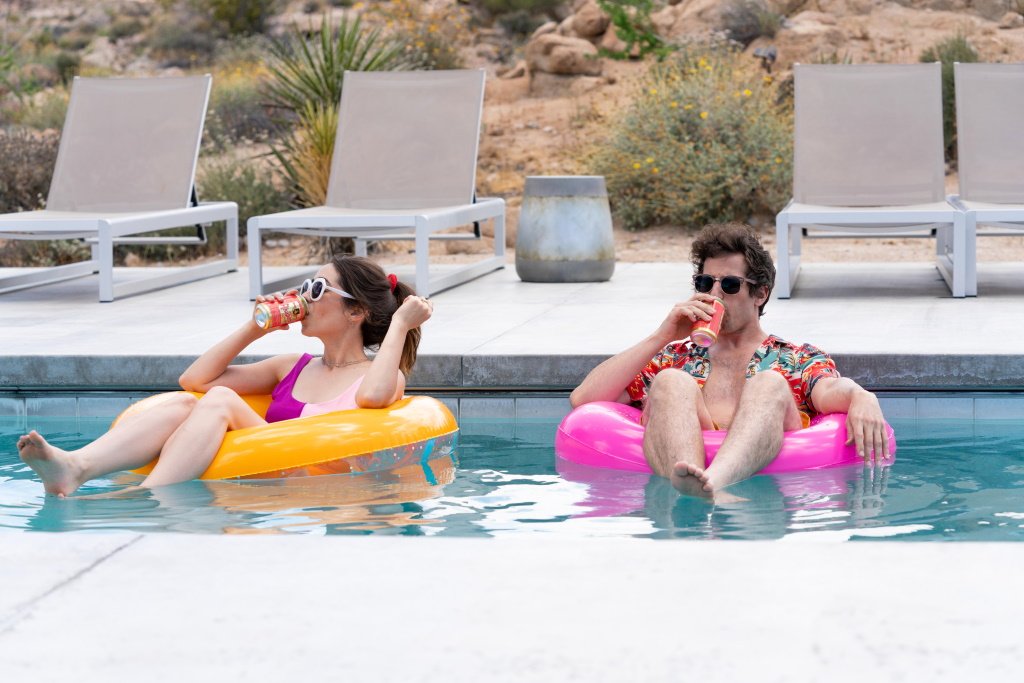 The hit of the 2020 Sundance Film Festival, “Palm Springs” (2020, TV-MA) is a romantic comedy with a “Groundhog Day” twist: a cynical wedding guest (Andy Samberg) and a reluctant maid of honor Sarah (Cristin Milioti) fall in love as they relive the same day over and over. Director Max Barbakow and writer Andy Siara add wild twists to their journey while the comic energy and chemistry between the leads carries the audience along. Originally slated as a theatrical release, it makes its debut on Hulu.

Charlize Theron is back in bad-ass action mode at the world-weary leader of “The Old Guard” (2020, R), an immortal team of mercenaries who may have a traitor in their midst. The violent, action-packed feature, adapted by Greg Rucka from his graphic novel and directed by Gina Prince-Blythewood, is all but designed for a whole series of films to follow (Netflix).

“First Cow” (2019, not rated), a frontier drama about a talented cook (John Magaro) and a Chinese immigrant (Orion Lee) who joins forces to start their own business in 19th century Oregon Territory, brings filmmaker Kelly Reichardt back for her fifth film set and shot in Oregon. The film enjoyed a brief but acclaimed theatrical release before theaters shut down (Cable On Demand, VOD).

A mentally ill woman (Yvonne Strahovski) is unlawfully imprisoned in an immigration detention center in “Stateless: Season 1” (2020, not rated). It’s one of the four stories explored in the Australian drama co-created by and costarring Cate Blanchett (Netflix).

Classic pick: Montgomery Clift is a poor boy reaching for the American Dream and slipping into a nightmare in the Oscar-winning “A Place in the Sun“(1951) costarring Elizabeth Taylor and Shelley Winters (Amazon Prime Video).

The animated musical adventure “Trolls World Tour” (2020, PG) sends the brightly-colored dolls on an odyssey to meet other tribes and musical genres. Features the voices (speaking and singing) of Anna Kendrick, Justin Timberlake, James Corden, Ozzy Osbourne, Rachel Bloom, and others. Also on DVD and at Redbox.

Also new: “Mighty Oak” (2020, PG-13), a musical drama about a ten-year-old guitar prodigy who may be the reincarnation of a one-time rising star.

Debuting direct to VOD is “Relic” (2020, R), a psychological thriller built on the strained relationships and suppressed emotions of three generations of women (Emily Mortimer, Bella Heathcote, Robyn Nevin) in a spooky old family home that may be haunted. It premiered at Sundance 2019.

The documentary “Mucho Mucho Amor: The Legend of Walter Mercado” (2020, not rated) chronicles the life and career of the flamboyant astrologer who became a huge TV personality on Latin American TV.

“Down to Earth with Zac Efron: Season 1” sends the actor traveling around the world in search of healthy, sustainable ways to live.

A pair of maverick detectives take on a crime syndicate in “Big Dogs: Season 1” (2020, not rated), a thriller set in the underground economy of an alternate reality New York City under financial collapse. Michael Rabe, Manny Perez, and Brett Cullen star. Eight episodes.

Johnny Depp and Angelina Jolie star in “The Tourist” (2010, PG-13), a romantic action thriller that hops through beautiful European locations.

The “Star Trek” spoof “Galaxy Quest” (1999, PG) with Tim Allen and Sigourney Weaver has become a cult comedy in its own right.

Classics: “Dodsworth” (1936), starring Walter Huston as an American industrialist with a failing marriage who finds a new love (Mary Astor) while vacationing in Europe, is one of the smartest and most adult dramas of the 1930s. It’s directed by William Wyler as is “The Little Foxes” (1941), adapted from the Lillian Hellman play and featuring a ferocious, Oscar-nominated performance from Bette Davis.

True stories: Ron Mann surveys the career of one of the great American maverick directors in “Altman” (2014, TV-PG).

Streaming TV: “The Fosters: Complete Series” (2013-2018, TV-14) is a family drama built around same sex parents (Teri Polo and Sherri Saum) raising a mixed family. It ran for five seasons on ABC Family, which has since been rebranded Freeform (Prime Video and Hulu).

Jacques Audiard directs “Dheepan” (2016, R), a drama of three displaced people who pose as a family to immigrate to France.

Steve Coogan and Rob Brydon bicker, banter, and offer dueling Michael Caine impressions while on comic culinary tours in “The Trip” (2011, not rated) and the sequel “The Trip to Italy” (2014, not rated).

“Expecting Amy” (2020, not rated) is a three-part documentary that follows comedian Amy Schumer as she prepares for a new comedy special while going through a difficulty pregnancy.

The surreal animated comedy “Close Enough: Season 1” (2020, not rated), from “Regular Show” creator JG Quintel, follows a young family living with roommates on the east side of Los Angeles, facing problems both down to earth and wildly fantastical.

Alden Ehrenreich is a young Han Solo in “Solo: A Star Wars Story” (2018, PG-13), a prequel from a galaxy far, far away that is as much galactic heist adventure as space opera. It costars Woody Harrelson, Thandie Newton, and Donald Glover as young Lando Calrissian.

The five-part docuseries “Outcry” (not rated), a five-part documentary series that digs into a high school football star convicted of sexual assault and the support of his community to question the investigation and the prosecution of the case; new episodes each Sunday. The full episode of the series premiere is available for free below.

“Blinded: Season 1” (Sweden, not rated, with subtitles) is a thriller set in the world of high finance, where a journalist discovers her bank director lover may be hiding something in his books. All eight episodes available.

The indie horror film “The Beach House” (2019, not rated), starring Liana Liberato and Noah Le Gros as a college couple whose weekend getaway get seriously nightmarish, debuts on Shudder.

Criterion Channel offers an offbeat festival of “Western Noir,” a selection of classic westerns that are also dark, often shadowy dramas of crime and greed on the frontier, from the celebrated “Blood on the Moon” (1948) with Robert Mitchum to the mercenary “Lust for Gold” (1949) with Ida Lupino and Glenn Ford to the great snowbound hostage thriller “Day of the Outlaw” (1959) with Robert Ryan and Burl Ives. Also new: