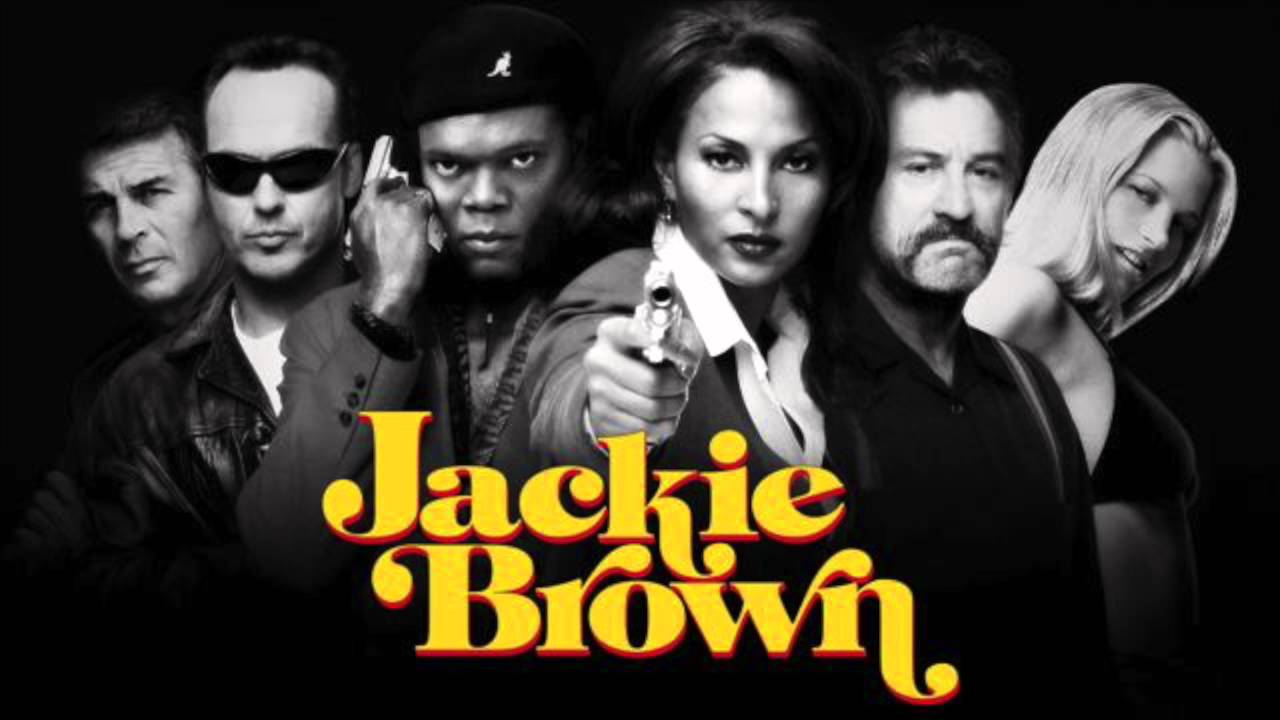 Jackie Brown (1997) – “Amateurs borrow, professionals steal,” goes the maxim, and Quentin Tarantino steals like a pro. Where directors of the previous generation peppered their films with classic cinematic quotes, Tarantino plunders the films of his formative years for ideas—mostly B-movies and exploitation films about cars and capers and criminals—and riffs on them with a mix of reverence and sly playfulness.

Tarantino’s first eight films aren’t so much stories as strings of anecdotes: movie moments, urban myths, conversations strewn with pop culture references. His challenge with Jackie Brown is how make someone else’s story—Elmore Leonard’s Rum Punch, to be specific—his own. His solution: set it in his own reference riddled world. From the film’s opening shot—a quote from The Graduate overlaid with early seventies movie lettering and set to a Motown tune—we know we’re in Tarantino territory.

Pam Grier’s entrance in her retro stewardess outfit introduces the kick-ass star of Foxy Brown and Friday Foster gracefully aging into the modern world. Robert Forster, the almost star of the late 60s turned exploitation film stalwart (see Alligator and Vigilante), brings the understated authority that marked his genre pictures to the lived-in ease age brings. That’s the genius of Tarantino’s casting. Jackie Brown is not some stand-in for Foxy Brown but a projection of where she might be 25 years later. Grier’s persona is intertwined with the role, a middle aged woman with her back to wall who turns her situation around: from victim to player. With the weight of her career as an action star, Grier makes Jackie her own and dominates the screen with her energy and charisma.

Robert Forster’s face is a mixture of been-around-the-block resignation and introspective peace. He doesn’t carry as much referential weight as Grier but makes a terrific counterpart. Where Grier’s energy and charisma define the resourceful Jackie, Forster has aged into a quiet gentleness, his chiseled face projecting an inner calm, and his performance earned him an Oscar nomination, his first and only. Together they’re quite a pair, icons of the seventies as survivors in the nineties.

Dropping them into a caper film with a funky beat and a cast that includes Robert De Niro as a laconic ex-con, Bridget Fonda as a stoner California girl, and Samuel L. Jackson as a smuggler who ties up loose ends with a bullet, Tarantino creates genre soup. Meticulous attention to detail, tongue-in-cheek establishing cards, a recurring time clock, even a (gratuitous) split screen recalls such caper classics as The Killing, The Thomas Crown Affair, and Twilight’s Last Gleaming. The Motown dominated soundtrack includes the theme songs to Across 110th St. and The Big Doll House (“Long Time Woman” sung by Pam Grier herself!) and highlights from the score to Jack Hill’s Coffy. Dirty Mary, Crazy Larry and Detroit 9000 play on TV, and Sam Jackson’s gun-dealing character references John Woo’s The Killer.

It’s more than a game of “name that reference,” though. His gift is in putting a spin on familiar conventions and surprising the audience by riffing on and defying expectations. The real pleasure of Tarantino’s references is that you don’t need to know the film to get the reference as long as you know the genre. In this age of video store collections and seventies chic, everyone can play! Jackie Brown works fine without a frame of reference, but for those already a part of his world the mixing and matching of genre conventions adds just another level of self-reflexive fun.

But Leonard’s story doesn’t leave Tarantino much room to maneuver, and suddenly Tarantino’s easy pace becomes a weakness. His generous attention to detail and love of “how things work” spins the film out to two and a half hours, but without the ping-pong bounce of conversations or playful construction of his earlier films. Tarantino seems to be caught between making a character piece and a crime film, trying to split the difference.

So Jackie Brown isn’t quite his best film, but it should be, with its grown up, lived-in characters. It’s still his most mature film of his first dozen years.

Robert Forster earned an Academy Award nomination for his performance, the only one of his career.

, iTunes, GooglePlay and/or other services. Availability may vary by service.
Jackie Brown [Blu-ray]

The Miramax Blu-ray includes the 43-minute “Breaking Down Jackie Brown” critics roundtable with Elvis Mitchell, Scott Foundas, Stephanie Zacharek, Tim Lucas and Andy Klein, plus the supplements from the 2002 DVD edition: the 38 minute documentary “Jackie Brown: How It Went Down,” a nearly hour-long “Look Back at Jackie Brown” interview with Quentin Tarantino, 12 minutes of deleted and alternate scenes (including an alternate opening credit sequence with Grier “surfing” down the moving sidewalk to “Pipeline”), the complete “Chicks With Guns” video, Siskel & Ebert’s original “Jackie Brown” review from “At the Movies,” “Jackie Brown on MTV,” a trivia track and galleries , the Jackie Brown promotional contest, a stills galleries of art, stills and promotional materials.