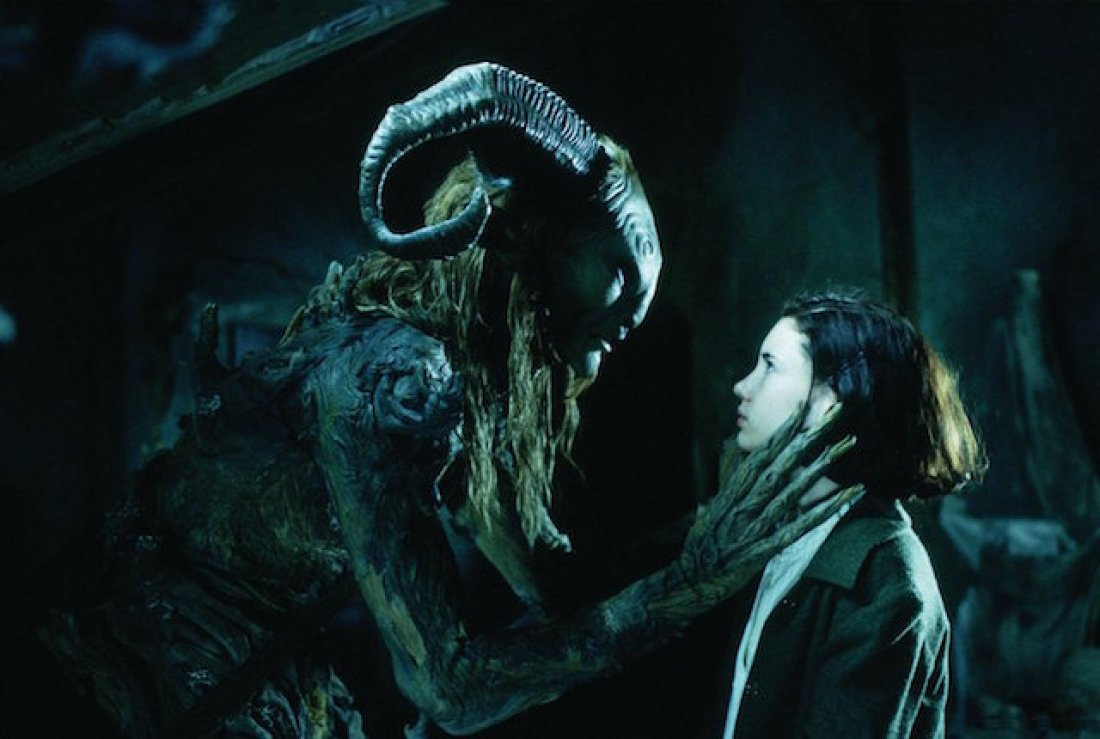 Pan’s Labyrinth (Spain, 2006), Guillermo del Toro’s dark fairy tale, is an elemental Alice in Wonderland amidst the horrors of Francisco Franco’s reign of terror in 1944 Spain.

Our Alice is an imaginative young girl named Ofelia (Ivana Baquero) who escapes into an elemental wonderland after she moves into the country estate with her ailing pregnant mother (Ariadna Gil). Ofelia is at once wide-eyed and wise and Baquero, a strikingly photogenic child, invests her with innocence, strength, compassion, and an instinctive wariness of her new stepfather, the cold, cruel Captain Vidal (Sergi López).

Ofelia sees magic all around her, in crickets that transform into faeries and a mythological faun (Doug Jones) that looks like an enchanted commingling of beast and forest, with vines and roots growing from fur and flesh. Jones (a mime by training) makes the faun an enigma with a body language that borders on threatening and del Toro leaves his intentions ambiguous as he sends her on odysseys into the lairs of horrific monsters. A far more brutal human war is waged above by Vidal, a cruel and callous officer in Francisco Franco’s militia tasked with crushing the remnants of the anti-Fascist rebellion.

Del Toro’s fantastical creatures have a primal, earthy quality, like ancient beings hewn from the earth and enchanted wood and resurrected after centuries in a state of decay and neglect, and a shadow of uncertainty hangs over the sense of wonder. Yet for all the terror Ofelia confronts—and del Toro reaches deep into the mythological subconscious and the unadulterated horror of early fairy tales for his primal visions—the haunting shadow worlds of imagination and nightmares pale next to the evil of the real world. Maribel Verdú co-stars as the caring housekeeper with a double life.

, iTunes, GooglePlay and/or other services. Availability may vary by service.
Pan’s Labyrinth (The Criterion Collection) [Blu-ray]

Criterion presents the film on Blu-ray and DVD in a new 2K digital master supervised by Guillermo del Toro. New to this edition are a 40-minute interview with del Toro by novelist Cornelia Funke about fairy tales, fantasy, and Pan’s Labyrinth and a new 26-minute interview with actor Doug Jones. Carried over from the 2007 release is a video prologue and commentary by Mexican director/writer Guillermo del Toro who describes his inspirations and explains his colors and textures and images with more articulation than most American directors can muster in their mother tongue. The 30-minute “Pan and the Fairies” follows the fantasy creatures from design to screen and, through raw production footage, shows you exactly (and ingeniously simply) how del Toro created the Faun’s goat-leg walk without animation and there additional archival featurettes, an interactive director’s notebook, footage of young actress Ivana Baquero’s audition for the film, and a foldout insert with a new essay by film critic Michael Atkinson.