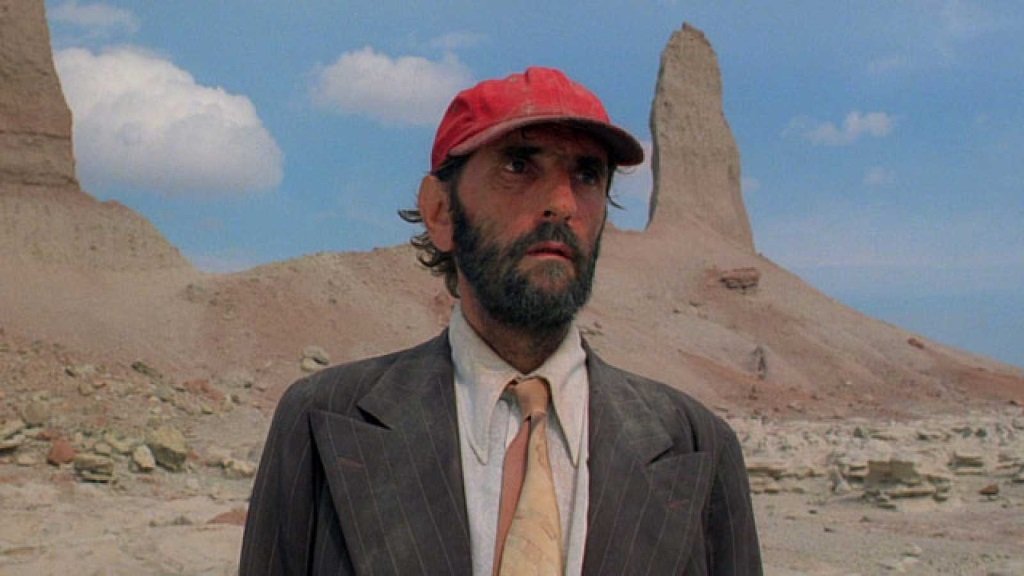 Winner of the Palme d’Or at the 1984 Cannes Film Festival, Paris, Texas (1984) is the first American film where German filmmaker Wim Wenders carved his own vision into the American landscape (both physical and cinematic). Just two years after his dispiriting experience directing Hammett for producer Francis Ford Coppola, he returned to the U.S. his own terms, with a story he developed with Sam Shepard and financial backing from Europe that gave him the freedom to make his own film. Paris, Texas (a name that evokes the collision of and contrast between Europe and America) is a road movie, a drama of reconciliation and redemption, a modern western and an emotional odyssey of epic simplicity and emotional integrity set against an America both mythic (the stunning vistas of the Texas border desert are as primal as John Ford’s Monument Valley landscapes) and modern (from the lonely roadside motels and neon totems to the view down on Los Angeles from the hilltop family home).

Harry Dean Stanton (in the first of only two leading roles in his amazing career) is Travis, a man who walks out of the desert and into civilization, parched and weak and mute but driven by purpose, even if it’s beyond his understanding at that point. Dean Stockwell is his brother Walt, who flies from Los Angeles to Southern Texas and drives him back, bringing Travis out of his almost catatonic, pre-verbal state as the journey brings him out of the wilderness and back to family, notably the son (Hunter Carson) he left behind four years before.

Wenders and Shepard prefer spare dialogue that suggests more than it explains, letting the performances fill in the blanks and the images frame the drama. Longtime Wenders collaborator Robby Müller films the deserts and highways of the American southwest with a reverence for the primal beauty and the spare, expansive, seemingly unending landscape. Stanton looks carved from the same wind-scoured stone and sand when he emerges from the desert and Müller and Wenders slowly soften and humanize him as he tentatively but sincerely interacts with his family and returns to society, only to leave on a quest with the son he has just reconnected with. Nastassja Kinski is Jane, the young wife and mother first seen in the home movies that Walt shows one night, and it’s like that image of the happy family captured in warm, blurry super-8 footage becomes his grail: he has to repair the broken family that, we are to learn, he himself destroyed.

You can find echoes of The Searchers in Travis’ odyssey, right down to his quest to reunite a splintered and separated family and the recognition that there’s no place for him in this family. But that homage seems to have grown organically from the development of the story. Wenders started shooting with only half of the script completed, intending to develop the end with Shepard as they shot the first half (in chronological order) and watched the characters emerge from the actors. As it turned out, Shepard was cast in another film, Country, and unable to work with Wenders on the set so Wenders developed the end of the film with another writer, L.M. Kit Carson, and sent his story treatment to Shepard, who scripted nights while acting days on Country. “It was a painful time,” Wenders recounted in the commentary he recorded for the film’s original DVD release in 2004, but the results are amazing. After so much of the dialogue coming in spare conversations and language stripped of artifice, the monologues that pour out in the third act are gripping, a mix of apology and atonement in story form, told through a barrier that separates them like visitors across jailhouse glass. And Ry Cooder’s spare score is a masterpiece of accompaniment, a lonely series of themes on acoustic slide guitar, a mix of folk, country and blues that haunts our wandering hero from the moment he walks out of the wilderness to the sudden gush of words that spell out his story, his regret and his promise of repair.

Paris, Texas is unmistakably a Wenders film, of a piece with Alice in the Cities and Kings of the Road and Wings of Desire, and the mix of Wenders’ sensibilities and love of American movies and Sam Shepard’s spare writing and take on fractured American families creates a sublime vision.

, iTunes, GooglePlay and/or other services. Availability may vary by service.
Paris, Texas (The Criterion Collection) [Blu-ray]

The film was newly remastered for the Criterion Blu-ray and DVD special edition released in 2010. The commentary by Wim Wenders is low key and reflective, like he’s narrating his own journey back through the film in remembrances sparked by observations, and he also offer commentary on the 23 minutes of deleted scenes, which are cut together like an alternate narrative—the story between the beats of the film—set to Ry Cooder’s score. Both were available on the earlier Fox release (now out of print), but the Criterion edition supplements them with additional archival material: a substantial excerpt from the 1990 documentary Motion and Emotion, an archival interview with Wenders from German TV, new video interviews with assistants Claire Denis and Allison Anders, seven minutes of super-8 footage shot for the home movies sequence and an (audio only) alternate version of Harry Dean Stanton’s monologue from the third act among the supplements. Two discs on DVD and one on Blu-ray, both with a booklet featuring an original essay, interviews, stills and other remembrances. 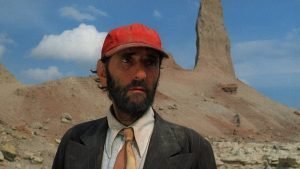