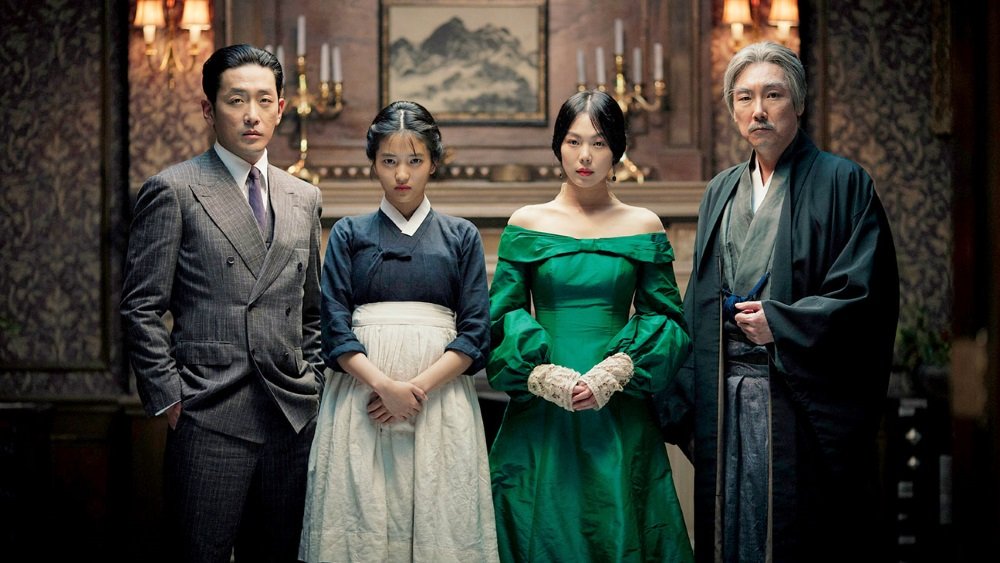 Park Chan-wook’s The Handmaiden (South Korea, 2016) leaves behind the austerity and cool tone of his superb but unheralded American debut Stoker to return to the intense imagery, twisting narratives, perverse subcultures, and elevated emotions of his Sympathy trilogy.

The story of con artists in 1930s Korea, adapted from the British novel “Fingersmith” by Sarah Waters (which was previously made into a British TV miniseries), has the look of a lavish period drama, the elegance of an arthouse film, the complex plotting of an ingenious caper that only the movies could sustain, and the sex of a classy softcore picture. Park shifts the setting from Victorian England to Korea under Japanese colonial occupation, which adds national tensions to a drama already roiling with class division and sexual exploitation.

The target is Lady Hideko (Kim Min-hee), the emotionally troubled heiress of a Japanese family fortune coveted by both an opportunistic and thoroughly corrupt Korean uncle-by-marriage (Jo Jin-woong) and a Korean con man (Ha Jung-woo) who bought and forged his way into a Japanese identity. He arrives at the country estate as the suave Count Fujiwara, an art teacher, and his lessons are his cover to seduce and marry the heiress out from under the powerful uncle, who has essentially imprisoned his niece in her own remote manor. Tangled up in the Count’s scheme and thrust into the center of the melodrama is Sook-hee (Kim Tae-ri), a street pickpocket and thief handpicked by the con man to play his inside woman, the handmaiden to the Lady haunted by her mother’s suicide and perpetually on the verge of following suit. All that close, personal attention lands her in her Lady’s bed, where class divide dissolves into sisterly comfort and then turns much more intimate.

That’s as much as you’d want to know coming in to the film, which lays all that out quite swiftly and wittily in the first few minutes of an involved film filled with switchbacks, flashbacks, and set pieces as architecturally beautiful as they are deviously entertaining. It’s like a film noir as lush period piece, where the line between femme fatale and tormented heroine keeps slipping. It has all the elements you want from a good genre film: narrative sleight of hand and clever twists, calculating characters with conflicting goals and hidden motives, hot-blooded sexploitation that looks more explicit than it actually is, and a heaping addition of kinky erotica. Just when you think you’ve got an idea of where it’s all heading, another twist sends it in another direction. Like the best confidence games, it keeps its secrets hidden with some terrific narrative sleight of hand.

You might expect the sociopolitical dimension to stake our sympathies along cultural lines; this is, after all, a tale with an orphaned street thief in the home of an occupying foreign national. Sort of. The added dimension of national identity and appropriation really just reveals that how much money and class determine power, which is more a matter of gender than culture. What appears to be an elegant, sexy, self-aware thriller in formal dress reveals itself to be a love story hidden in a tale of exploitation and allegiance. Park’s sympathies are with the women—one of the most satisfying scenes in the film turns a spontaneous act of vandalism into a defiant statement of taking back their dignity and self-worth—and it rewards us with a perverse fairy tale ending, albeit a fairy tale where the big bad wolves are pornographers, forgers, and pimps. It’s also one of the most purely engaging and entertaining films of 2016.

Not rated, in Japanese and Korean with English subtitles. The subtitles differentiate Japanese language translations from Korean language, which is identified with italics.

Also on VOD and SVOD through Amazon Video