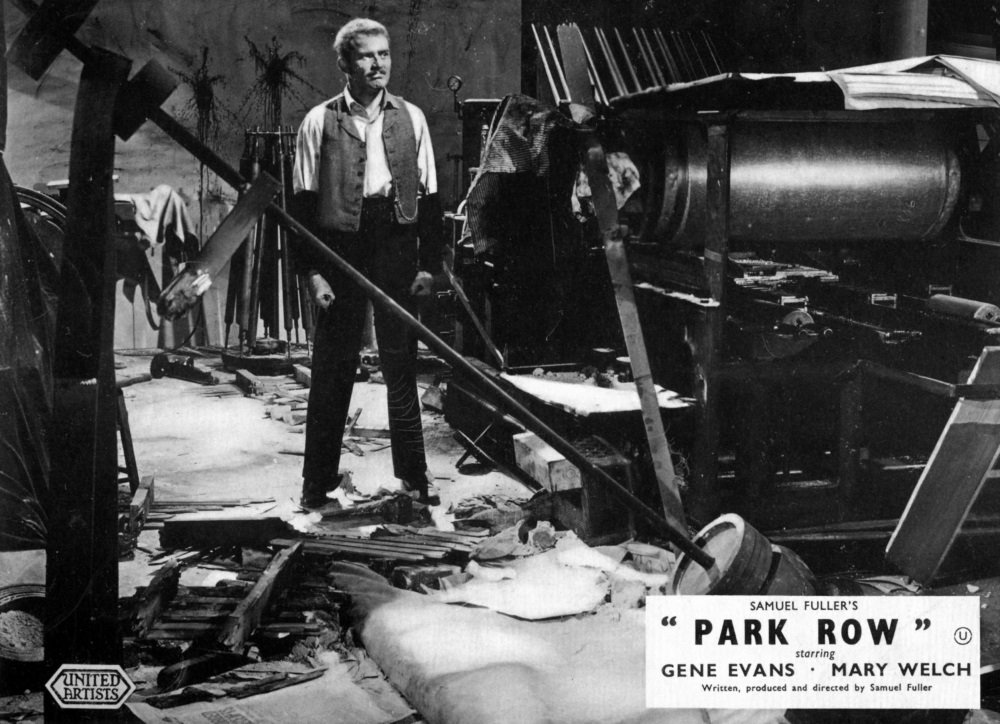 Free press and free enterprise are uniquely intertwined in Samuel Fuller’s Park Row (1952), the great American maverick director’s tribute to the pioneers of the modern American press in 19th century New York City. Gene Evans—Fuller’s burly alter ego in The Steel Helmet and Fixed Bayonets!—plays Phineas Mitchell, a newsman with big ambitions who goes rogue as the editor of his own paper, launched with a skeleton staff, second-hand equipment, butcher paper in place of newsprint and more circulation-boosting ideas than all his competitors put together.

The line between responsible journalism and bald-faced stunt isn’t blurred here, it’s non-existent. He builds his paper on manufactured controversy and populist positioning, but Phineas draws the line at outright lies and violence. His nemesis Charity Hackett (Mary Welch) isn’t all that squeamish about such niceties. She’s a society lady who demands a façade of dignity for her paper but doesn’t mind hardball tactics behind the scenes. Phineas, for all his hucksterism as a wizard for front page headlines and circulation gimmicks, is still a journalist at heart with a fierce competitive streak and an entrepreneurial idealism.

Park Row is driven by Fuller’s love of old-school journalism ideals and newspaper wars. It’s filled with journalism lore, historical landmarks (the birth of linotype!), the day-to-day details of physically printing a broadsheet, and the philosophy and business of managing a daily paper. Fuller plays the whole thing out in a half-scale reproduction of the Park Row of old, the street of newspapers from the 19th century, and his camera constantly tracks back and forth along the avenue, creating energy simply out of the kinetic activity.

But this is still the two-fisted Fuller behind the camera and Phineas, while not one to start a brawl, is not shy about finishing one. When he finds a thug who attacked one of his men, he drags him out to Park Row and give him a lesson in American history by hammering the man’s noggin against the plaque on the base of Benjamin Franklin’s stature, as if trying to beat his words of wisdom directly into his skull.

Park Row isn’t Fuller’s best film by far; it’s talky and melodramatic and, for all his ingenuity, very B-movie looking, with its cramped sets and underfunded settings. His pulp dialogue and brash energy enlivens the film without quite defining it and his bizarre love story is a contrivance that seems to arrive from another movie all together. But Fuller made it with passion and commitment and you can’t help but appreciate that quirky spark that drives the film.

Also on DVD and on SVOD through Amazon Video, iTunes, GooglePlay, Vudu and/or other services. Availability may vary by service.
Park Row [DVD]