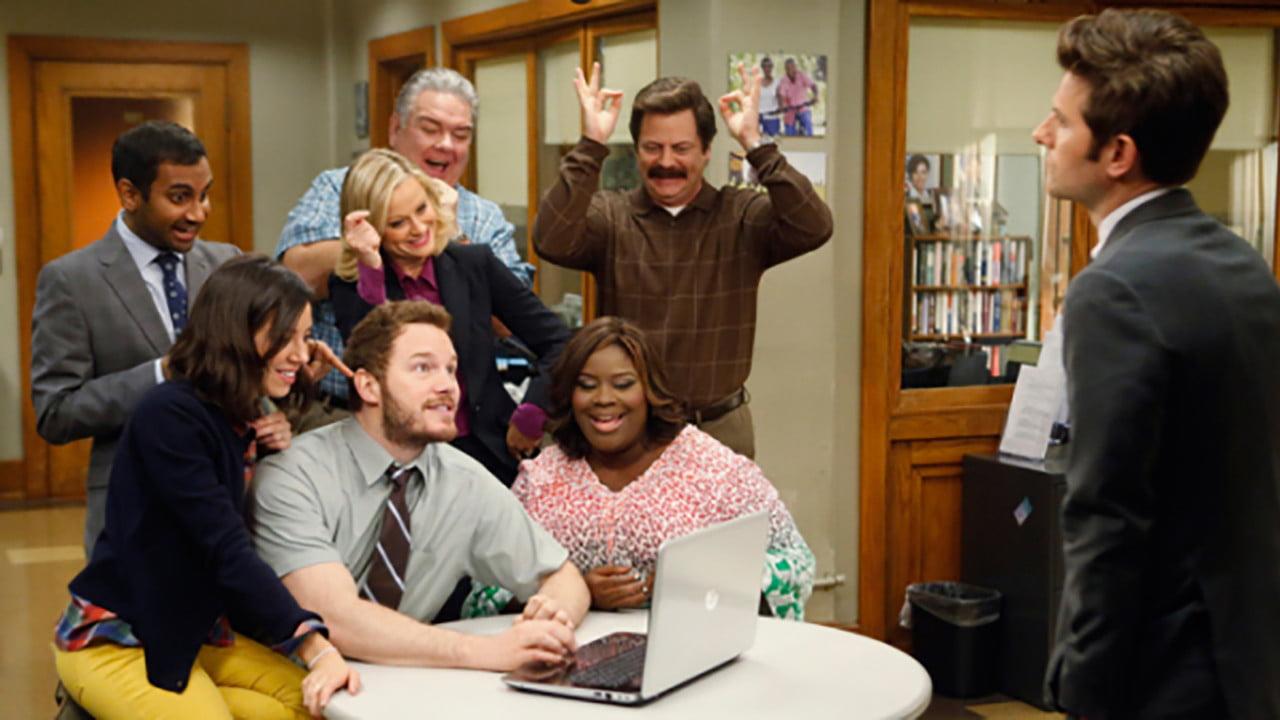 In Parks and Recreation: Complete Series (2009-2015), Amy Poehler stars as Leslie Knope, the Deputy Director of the Pawnee, Indiana, Parks and Recreation Department. She’s a dreamer in an environment that reveres power over public service and an idealist who believes in what she’s doing, even if she really doesn’t really know how to do it.

This comedy of incompetence, office politics and petty turf wars in municipal government and small town bureaucracy was created by former Office-mates Greg Daniels, a producer and showrunner on the American sitcom, and Michael Shur, who went on to create The Good Place and Brooklyn Nine-Nine, and is shot in the same mock doc/reality show style as The Office. The abbreviated try-out season of six episodes charts Leslie’s efforts to turn a dangerous open pit in a vacant lot into a public park. The project faces stiff opposition from not just her gruff boss, Ron Swanson (Nick Offerman), but the public itself, none of which deters her quest.

The Office alumnus Rashida Jones co-stars as a citizen who joins in her campaign and Paul Schneider is the city planner who hits on every woman who passes through the office except for the lovesick Leslie. The series has the same low-key humor and the comedy of discomfort and awkwardness of The Office but it never quite finds its own identity in its abbreviated debut.

The show starts to gel in Season Two, where the supporting cast comes into its own: Rashida Jones as her clear-thinking best friend Ann, Nick Offerman as her militantly libertarian yet unexpectedly supportive boss Ron Swanson (he’d like nothing more than to privatize the local government), Aziz Ansari as the would-be office player Tom Haverford, Aubrey Plaza as glum office intern April, and Chris Pratt as the cheerful doofus Andy Dwyer, trying to win Jones back with schemes that he hasn’t quite thought through.

Poehler’s Leslie is no Michael Scoot blowhard but a spunky government bureaucrat who genuinely loves her job and takes public service seriously, which is fine by her coworkers since it means they can goof off while she does all the work. Along with the office politics and petty turf wars of municipal government and small town bureaucracy there is the obligatory romantic travails as the man of Leslie’s dreams starts dating Ann and Leslie steps into the dating pool with mixed results (from near successes with Louis CK as a nice-guy cop and Justin Theroux as a globetrotting attorney to a predictably disastrous blind date with Will Arnett, Poehler’s real-life husband). As in The Office, this talented ensemble warps sitcom conventions with superb improv byplay, and the season ends with new elements tossed into the chemistry. It’ll take more than that to stop Leslie.

Season Three opens with two new cast members: Rob Lowe and Adam Scott as bureaucrats sent to keep the city from bankruptcy by shutting the government down. They slip right in to both the bureaucratic tangle of municipal government and the self-aware mock-doc style of comedy. Along with the usual challenges of municipal crises and distracting controversies and a competition with the upscale town next door (and its tart city planner, guest star Parker Posey), Leslie navigate a tricky office romance and April and Andy get hitched on a whim, taking on married life with the same impulse-driven reflexes that guided their chaotic single lives.

Leslie Knope, the most dedicated civil servant in small town municipal government, hitting the campaign trail to run for City Council against the lovable doofus son (guest star Paul Rudd in perfect form) of the town’s biggest employer in Season Four. While she’s the energizer bunny in a department of underachievers, the entire staff rallies around her out of friendship and camaraderie, and she even finds love with coworker Ben (Adam Scott), who resigns from his job to both romance her in the open (it’s against the rules to date a co-worker and Leslie is nothing if not a stickler for details) and to run her campaign. Other guest stars this season include Patricia Clarkson and Megan Mullally (as Offerman’s ex-wives) and a superb Katherine Hahn as Rudd’s high-powered campaign manager, hired by Daddy to ensure he wins this small town election.

Season Five takes us through the first year of Leslie’s tenure on the highly dysfunctional Pawnee City Council. The season also finds her boyfriend Ben running a political campaign in Washington D.C., which only strengthens their romance (the season ends with a wedding), her best friend Ann anxious to have a baby, and Tom finally finding a business model that clicks. This is still one of the funniest ensembles on TV (Nick Offerman, Aubrey Plaza, Chris Pratt, and Rob Lowe are all priceless) and the series gives them all episodes in which they can shine. This season also features guest stars Lucy Lawless (who brings romance in the life of Ron) and Patton Oswalt (who pitches a Star Wars / Marvel Cinematic Universe crossover in a hilarious town council filibuster).

Season Six opens with a trip to London before settling into the stories that guide the season: the efforts of City Councilwoman Leslie to save rival town Eagleton from a crisis, the nasty recall campaign to remove her from office, Ron Swanson’s life as a married man and father of two girls, and a farewell to best friends Ann and Chris from Pawnee (and the series). Poehler’s supercharged, overextended, idealistic Leslie remains the center of the series but the supporting cast is given room to explore their own characters and stories.

The seventh and final season takes leap two years into the future (giving the writers free reign to imagine their own near-future) and crams in complicated conflicts and happy endings for the entire cast in a valedictory lap that is both funny and satisfying. One show plays out as an episode of Andy’s local kids show, right down to the credits and the snazzy editing gimmicks, with Chris Pratt (returning to the show from his star-making big screen turn in Guardians of the Galaxy) playing superhero Johnny Karate like an overgrown kid with a heart as big as his imagination.

What was created as a kind of companion series to The Office was never as popular as its inspiration but was every bit as clever and personable and developed into the better, brainier show as far as I’m concerned, thanks to clever writing, a brilliant cast, and characters who continued to grow and evolve. These characters and the eccentric world around them are the bedrock of this satire of small town politics, and the talented ensemble warps sitcom conventions with superb improvisational byplay. Where so many sitcoms find their humor in incompetence, this is the rare comedy that celebrates talent, commitment, and public service, and still finds humor in it.

It was nominated for 14 Primetime Emmy Awards over its run but never won, which was a shame. I think it’s a better show than The Office.