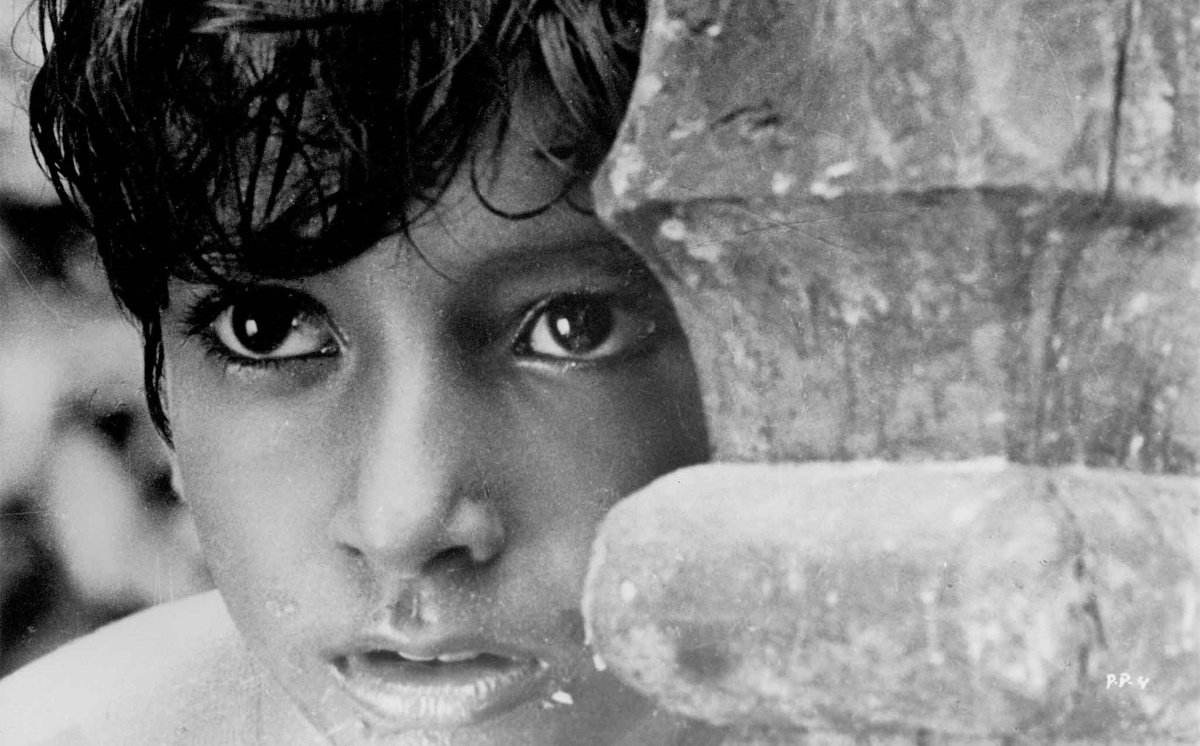 In 1955 Satyajit Ray, a young graphic artist in the advertising industry, released his debut feature, a labor of love made independently over the course of two and a half years. Pather Panchali (India, 1955), a portrait of life in a small, impoverished village in rural India, has texture and grace of a painting.

Seen through the eyes of young Apu, it’s really about three generations of women in his home: elder Auntie, protective Mother, and bright-eyed older sister Durga. It was India’s answer to Italy’s neo-realism, in part out of inspiration but also because it was made under similar conditions: little money, non-professional actors, a first-time director trying to capture a world that hadn’t been seen on screens.

Its portrait of rural poverty was something western audiences could relate to more than India’s distinctive urban culture and the customs, clothes, and score—Ravi Shankar on the sitar—suitably exotic color to a story that critics liked to call universal. That in part explains why this film was embraced internationally while other films from India failed to break through. Maybe it helped that it affirmed western perceptions of a country and culture that was little understood.

Pather Panchali is also an astounding debut of great power and poetry that is undiminished today. Ray put his passion into the film and created a nuanced and delicate film. Ray brings their environment alive in breathtaking scenes, especially Apu’s magical encounter with a train, billowing smoke in its wake like a mythical creature driving through his forest home. And he creates full, complex characters. While we see them through the wide-eyes of Apu, we do not get a simplified or reductive portrait.

It was followed by Aparajito (The Unvanquished, 1957), which takes the now teenage Apu and his parents to the city of Benares, and, after a break making two unrelated films (including the magnificent The Music Room), Apur Sansar (The World of Apu, 1959), a powerful story of love and tragedy that follows the adult Apu’s loss and rebirth.

It won two awards at the Cannes Film Festival and placed in the number 35 spot in the 2022 Sight & Sound Greatest Films of All Time poll.

The original negatives of all three films in the Apu Trilogy were damaged beyond repair in a fire in 1993. They were restored in 2015 in a collaboration between Janus Films, Academy Film Archive at the Academy of Motion Picture Arts and Sciences, and L’Immagine Ritrovata in Bologna, using the surviving elements of the negatives along with duplicate negatives and fine-grain 35mm masters.

The restorations were released by the Criterion Collection in a special edition box set in 2015 with video interviews with actors Soumitra Chatterjee, Shampa Srivastava, and Sharmila Tagore, camera assistant Soumendu Roy, and film writer Ujjal Chakraborty, plus new and archival featurettes and a video essay by Ray biographer Andrew Robinson among the supplements.