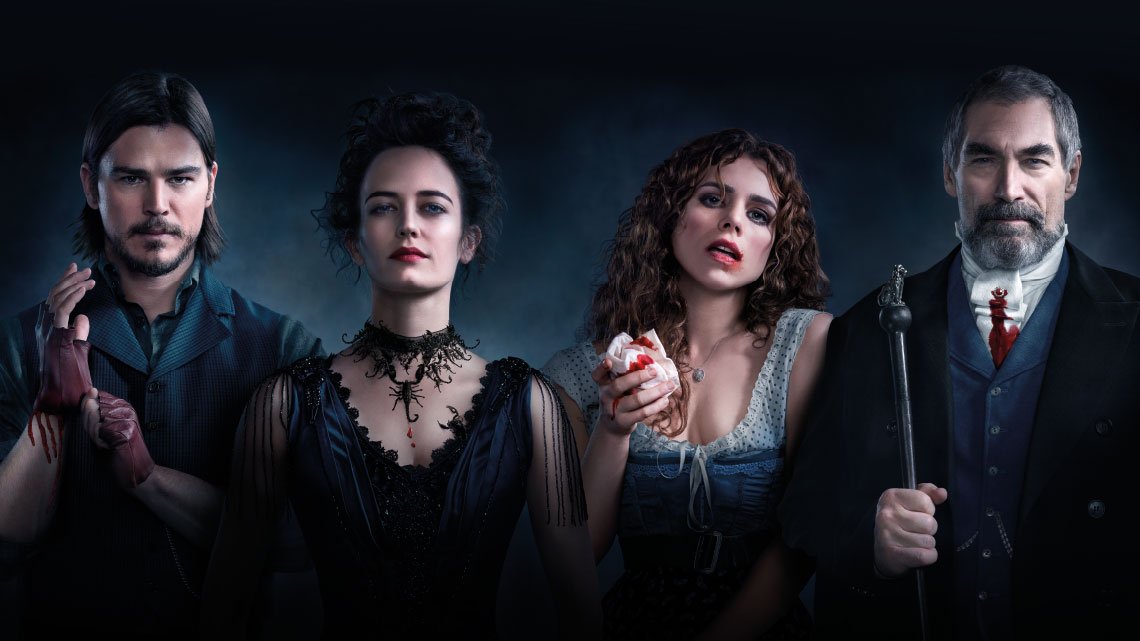 The very title Penny Dreadful (2014-2016) captures the mood of this original series, which was created for Showtime by Oscar-winning screenwriter John Logan. It was the nickname given to cheap horror novels, and while this show is anything but cheap, it is filled with dread and unease.

Penny Dreadful stirs the characters of the iconic British horror novels of the 19th century into a shadowy world of vampires, witches, demons, and dark magic in Victorian London, a world both real and unreal. It’s a premise similar to Alan Moore’s celebrated graphic novel The League of Extraordinary Gentleman (and the misguided big screen adaptation), but with its own gothic sensibility and tormented soul. Logan scripts all eight episodes of the debut season and horror director J.A. Bayona (The Orphanage) sets the ominous, shadowy atmosphere and tone as director of the first two episodes.

The series revolves around a trio of original characters who take on the supernatural underworld of London. Sir Malcolm Murray (Timothy Dalton) is searching for his daughter Mina, who has been taken by a vampire (as in the novel Dracula), with the help of Vanessa Ives (Eva Green), a medium with a troubled past. Josh Hartnett is the American Ethan Chandler, who comes to London as part of a Wild West show and hires himself out as a gunman to the team. Assisting this core group is Dr. Victor Frankenstein (Harry Treadaway), whose first experiment in the reanimation of human flesh (Rory Kinnear) has returned to demand a mate, and weaving through their stories is the decadent and eternally young Dorian Gray (Reeve Carney), who woos Vanessa.

Where season one takes on a plague of vampires in the London underworld, season two revolves around a coven of witches led by the cruel Madame Kali (Helen McCrory), who targets the tormented Vanessa and her team. Meanwhile Ethan struggles with a beast within that he is unable to control, Victor keeps his promise to create a bride (Billie Piper) for his creature, and the ageless and sexually omnivorous Dorian Gray reveals a truly terrifying dark side. Under attack from an insidious threat (beautifully imagined for the screen; the demonic daughter of Kali emerge from the walls like monstrous chameleons), this team of supernatural warriors pulls together. Their mutual devotion is one of the strengths of this smartly-written show.

The third and final season sends the group to the American West before bringing them back to London for a final showdown with Dracula (Christian Carmago) over the soul of Vanessa. Shazad Latif joins the show as Dr. Henry Jekyll / Hyde and Brian Cox appears as Ethan’s American rancher father.

Logan reimagines iconic characters in dramatically creative ways and creates vivid personalities for his haunted heroes, which this fine cast bring to life beautifully. It’s Dalton’s best role in years and he rises to the occasion, embracing the anger and loss that Malcolm most confront before his paternal leadership can emerge, and Eva Green is devastating as the tormented Vanessa, whose powers come with a curse. In a culture filled with new takes on small screen horrors, Penny Dreadful is the smartest, the darkest, and the richest horror series of them all.

It has nudity, violence, and gore. It is also an impressively produced show with high production values and a Gothic atmosphere that favors mood over spectacle yet still delivers both with imagery more creative than explicit.

All three seasons are available to Showtime Anytime subscribers.

John Logan has been nominated for the Oscar three times; alas, no wins.