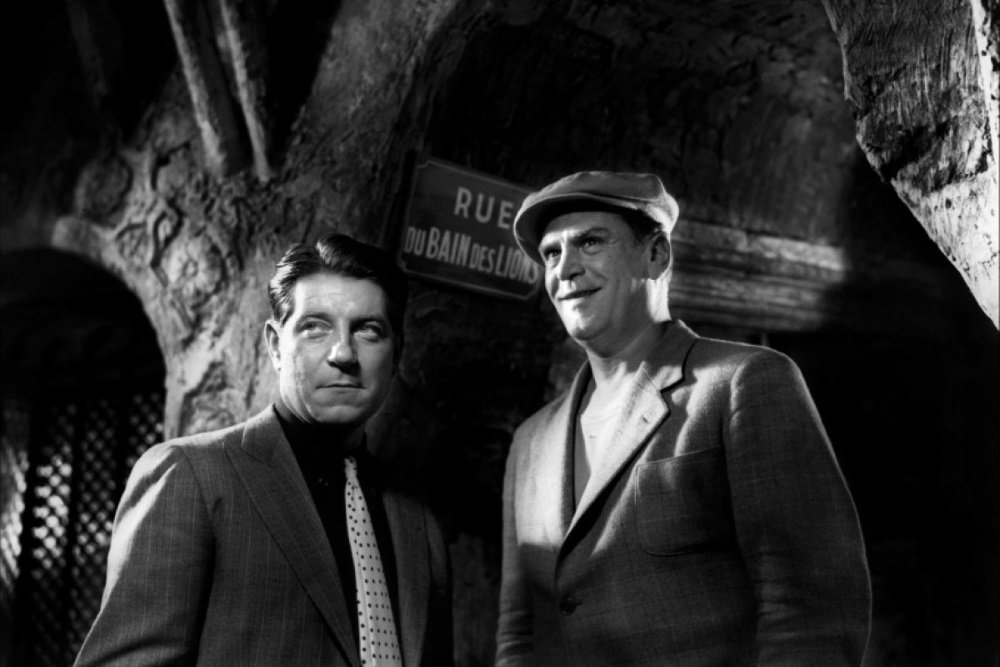 Jean Gabin was a brooding, rough working class anti-hero in France when his role as cool master criminal Pépé le Moko (France, 1937) made him an international star.

Set in the Casbah of French Morroco, a labyrinth of alleys and termite-hole dwellings in an underworld slum that creates its own bustling, self-contained society within Algiers, Gabin’s Pépé is the uncrowned king of the criminal jungle. He’s also its prisoner, safe only as long as he remains in this world that the local gendarmes can’t penetrate. “When he is killed, there will be 3,000 widows at his funeral,” says Moroccan Inspector Slimane (Lucas Gridoux), whose complicated relationship with Pépé is based on mutual respect and utter honesty: he walks the Casbah only because he never hides his identity or his intentions.

Into this shadowy world, where friendship and trust is everything yet betrayal and duplicity awaits behind every dark corner, walks a lovely Parisian (the exotic Mirielle Balin) adorned in expensive jewelry. Pépé steals her jewels and she steals Pépé’s heart, a fatal weakness exploited by Slimane, the only cop to have earned his respect. It’s the chink in Pépé’s armor at the center of his plan to capture the Casbah’s most notorious gentleman thief.

Gabin is marvelous as the confident yet restless Pépé, a cultured man equal parts elegance and edgy brutality at home in this urban jungle but restless to escape. Julien Divivier’s romantic crime classic is a prime example of French poetic realism (a precursor to American film noir), shot in a shadowy style enhanced by the claustrophobic rooms and crowded streets. It’s a world where friendship and trust is everything yet betrayal and duplicity awaits behind every dark corner. Just as Pépé exacts a harsh justice to those who defy his code, he pays the price when he breaks his own rules. Hollywood remade the film as Algiers with continental heartthrob Charles Boyer in Gabin’s role.

Criterion Channel also presents supplements from their DVD release, including an archival interview with director Julien Duvivier and excerpts from a French TV program on actor Jean Gabin, plus a hosted introduction by Alicia Malone.

Though restored in 2002, the print exhibits often depressing extremes of age and wear do to decades of neglect, and it’s only due to painstaking mastering that it looks even this good. According to the notes, the scratched and damaged negative was used to preserve the contrast and sharpness of the photographic image, a decision that proves its case when you compare it with the mushy, fuzzy clips included in the accompanying documentary excerpts from the 1978 TV documentary Remembering Jean Gabin. Over 30 minutes of excerpts, narrated in English but largely composed of interviews with Gabin’s friends and colleagues in French with English subtitles, are featured on this edition (the video quality is noisy and weak, but watchable and hardly distracting considering the nature of the program). Also featured are a 10-minute interview with director Julien Duvivier from the French TV program Cinepanorama in 1962, scene by scene video comparisons between Pepe le Moko and the 1938 American remake Algiers (which didn’t just replicate shots and sets, but even lifted the introductory montage of the Casbah whole cloth), three illustrated essays (“L’Origine de Pepe” and “Location, Location, Location,” excerpted from Ginete Vincendeau’s BFI study of the film, and “The Many Faces of Pepe,” which concludes with the video comparisons), the trailer, and an 8 page foldout featuring an essay by Michael Atkinson.