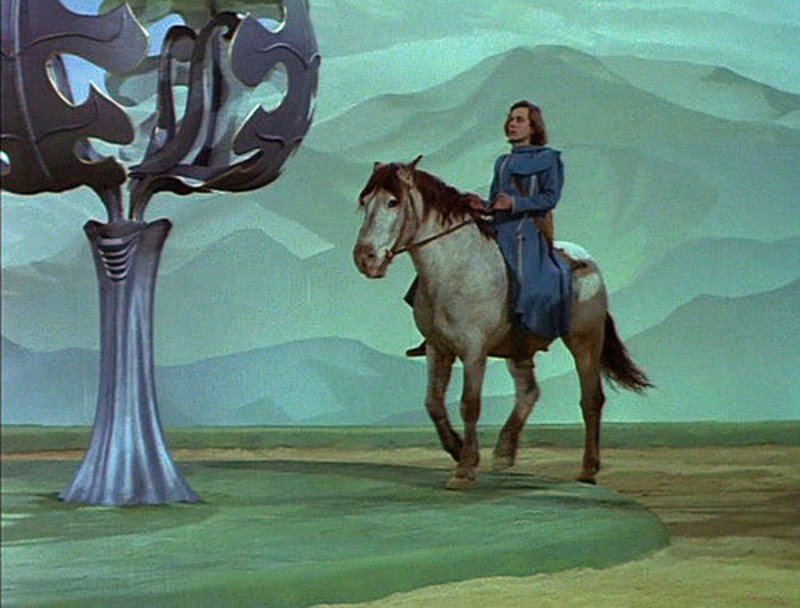 Eric Rohmer’s unique retelling of the tale of Perceval (France, 1978) is a great and glorious anomaly in the career of the nouvelle vague filmmaker. Adapted by Rohmer from the 12th century book by Cretien de Troyes, it’s a strange, sophisticated mix of ancient theater, medieval painting, music and prose in a beautifully stylized film narrated in couplets by a chorus of singers and musicians playing traditional instruments, and often by the actors themselves.

Fabrice Luchini is all naïve innocence and wide eyed wonder as the child-man Perceval. The ignorant but well-meaning young lord vows to become a knight after catching his first sight of what he believes to be godly beings but he knows nothing of the world he now faces, which leads to awkward, humorous, and sometimes tragic consequences on the road to King Arthur’s court.

It plays out completely on a circular stage where bulbous metal sculptures stand in for trees, flat storybook castles look like giant cardboard toys, and the horizon is a backdrop painting. It looks like a medieval painting come to life and plays like theater, but comes alive in excellent performances and enchanting stories, all performed in rhyming couplets. It was greeted with derision upon release but looks better and more revolutionary with each passing year. Rohmer’s odyssey into the very nature of stories and storytelling remains one of the most singular expressions in modern cinema and a fascinating, delightful experience.

The DVD from Fox Lorber is long out of print and a collectible.