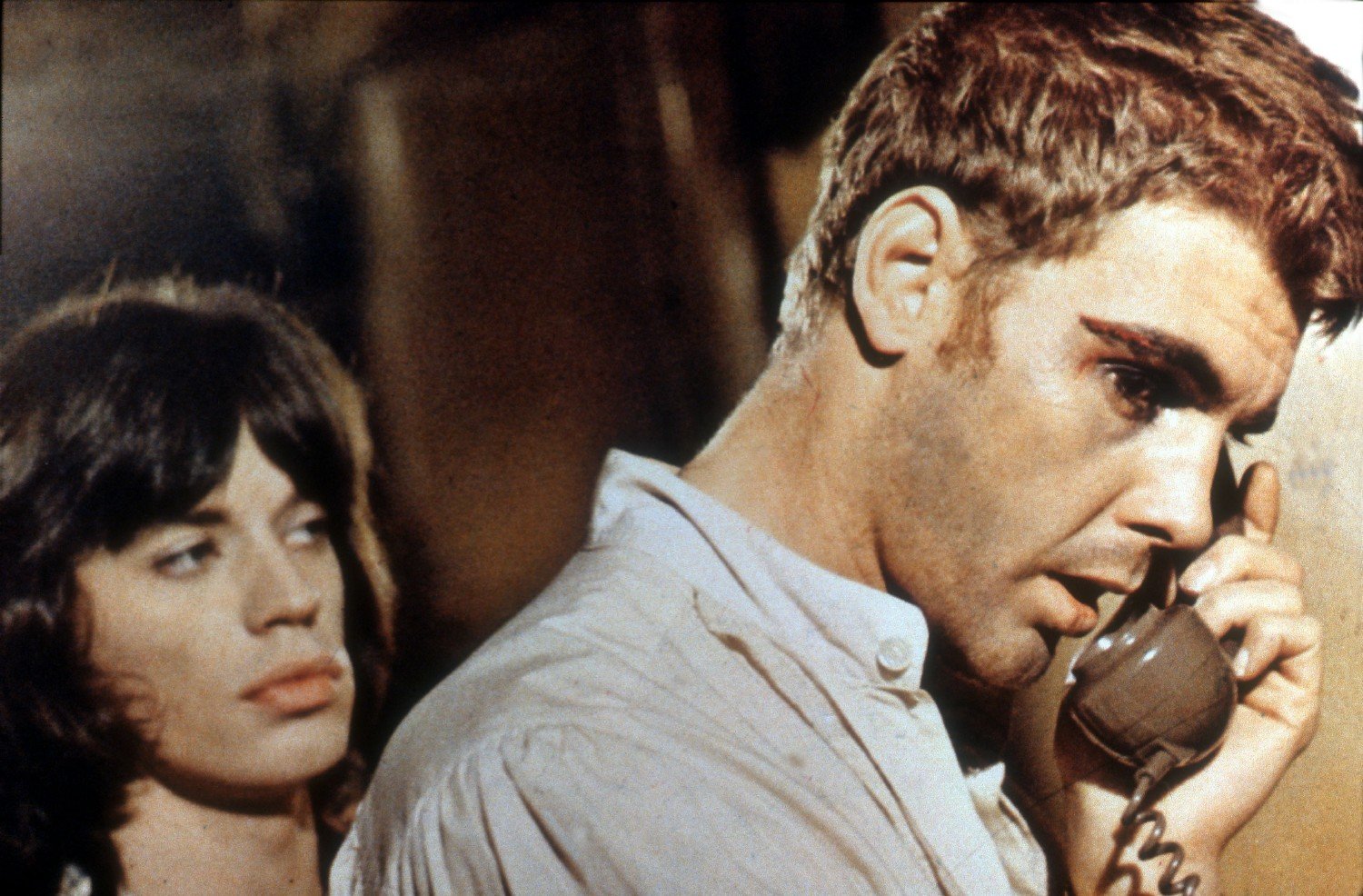 Performance (1970) may have been released in 1970 but this collision of London gangster machismo and drug culture, where “Nothing is true; everything is permitted,” is unmistakably a product of the sixties.

Mick Jagger makes his feature acting debut as Turner, a reclusive rock star in a dilapidated manor home in a London slum, but it’s James Fox who powers the film as Chas, an angry, vicious young thug always on the edge of spinning out of control. When he finally does, he runs lotion and red paint through his hair (giving him a hairdo that looks like it was cast in plastic) and goes on the run, hiding out from the cops and his own mob boss in a rented room in the basement of Turner’s place.

“The only performance that makes it, that makes it all the way, is the one that achieves madness,” says Turner as he and his lover (Anita Pallenberg) draw Chas into their little world of sex and drugs. It’s not a promise of things to come, it’s a description of what’s already going on, and it comes to a head in the “Memo From Turner” number, the demonic Jagger solo tune with a sultry slide guitar by Ry Cooder. It’s still the most wicked and dangerous Jagger that has ever been on screen. Speaking lines as Turner, the hermit of a rock star haunting a wreck of a mansion, Jagger is oddly passive, but once starts biting off lyrics and chewing them over as a song, he commands the scene and the screen. It’s not a proto-music video, as some have suggested. It’s a rock opera aria and Jagger delivers with a performance of a lifetime.

Performance marks the directorial debut of both cinematographer Nicolas Roeg and artist / writer Donald Cammell (they co-directed) and they spin a dense web of images and ideas and cultures in upheaval. It’s a heady brew from the opening scene, which stitches two seemingly disconnected storylines with aggressive editing that seems to rewrite the script by cutting in sentence fragments. This is counterculture with a savage edge. Produced for Warner Bros., it was shot in 1968 and shelved for a couple of years after a poor preview while Cammell re-edited (Roeg had to leave to start his next film, Walkabout, in Australia).

It’s amazing what Cammell got past Warner; this is perhaps the first major studio film to embrace androgyny and bi-sexuality in its main characters without judgment. And it’s not just in the hideaway maze of Turner’s oasis, where identities blur in the games of musical beds (on Blu-ray it’s much easier to see that that it’s Mick and James in a post-coital cuddle before the identity shifts once again). Pay attention you’ll see that the mob boss, Harry Flowers, relaxes to gay porn while in bed. How that got past Warner Bros. I’ll never know, but it gives this portrait of London thug machismo a homoerotic quality that is more than mere suggestion. Sex and violence aren’t simply connected, they are intertwined here along with the fluid idea of identity and sexuality.

, iTunes, GooglePlay and/or other services. Availability may vary by service.
Performance [Blu-ray]

On Blu-ray from Warner Archive and DVD from Warner Bros. Home Entertainment. The Blu-ray debut looks brings out details not apparent on the DVD. The 2007 DVD release clipped a line that has been restored for this edition – “Here’s to old England!” – and presents a different vocal performance for actor Johnny Shannon, who plays mob boss Harry Flowers. Some of the performances were rerecorded for the American release to soften the cockney accents and it’s not clear which version is presented on American home video. The film was released in mono and so is disc; the dense soundtrack sometimes gets muddied in the mix, but “Memo From Turner” sounds terrific. It jumps out of the mix.

Also includes the 24-minute featurette “Performance: Influence and Controversy,” a very good piece on the production, release, and culture of the film, originally produced in 2007 for the DVD release. It doesn’t feature any of the primary participants (no Jagger, Fox, or Roeg, and Donald Cammell died in 1996) but it does include interview with producers David Cammell and Sanford Lieberson, editor Frank Mazzolla, and co-star Anita Pallenberg. The archival “Memo From Turner” is a five-minute promotional piece from the film’s original release that focuses on Jagger’s contributions to the film and features almost the entire song. The supplements are not presented in HD.